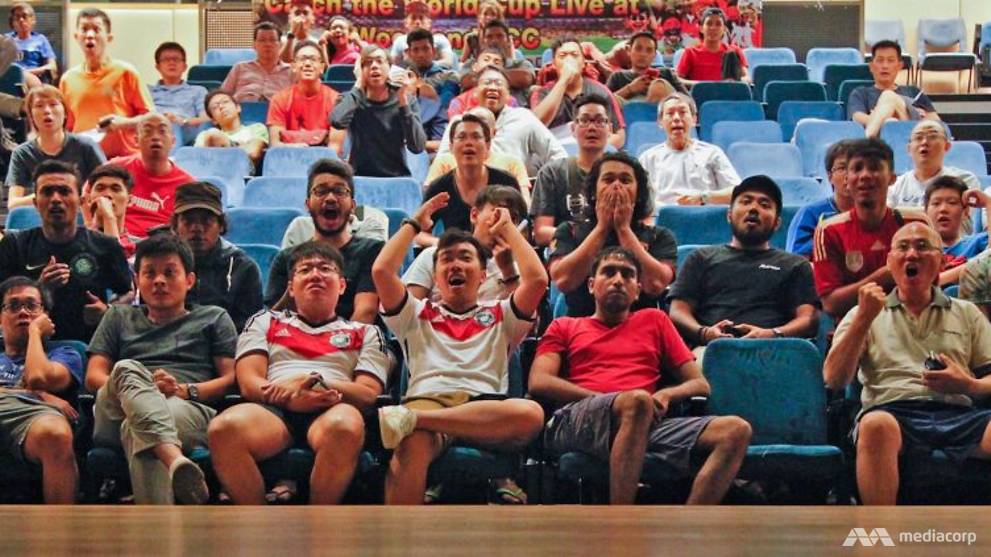 The Big Read: Forget the Trump-Kim summit, here's what Singapore has been really gearing up for

Businesses and retailers in Singapore are going all out to lure fans into their establishments as the world cup fever hits.

SINGAPORE: The television connections have been checked, the flags and jerseys mounted on the walls, and the storerooms are well-stocked. All local businesses and retailers are waiting is for World Cup fever to grip the nation.

With the 2018 Fifa World Cup set to kick off in Russia on Thursday (Jun 14), businesses and retailers here are pulling out all stops to capitalise on the quadrennial football extravaganza.

From extending their operating hours, installing more television screens at their premises, stocking up on products, to building their marketing and promotions plans around the month-long event, businesses are hoping to get that extra boost to their bottom lines through the tournament.

Popular bar and dining chain Harry’s, which will show all 64 matches at most of its 21 outlets, are targeting a 20 per cent rise in revenue.

Their optimism stems from a simple reason: Match timings.

The previous three editions of the World Cup — Germany 2006, South Africa 2010 and Brazil 2014 — have seen most matches being played in rather ungodly hours in Singapore.

Ordinary fans were reluctant to venture out to bars beyond midnight on weekdays just to catch some World Cup action. In those years, many chose to enjoy the World Cup experience at home.

This year, it’s different. Russia is closer to Asia than other European countries, and the time difference, a mere five hours behind, is much more palatable for the ordinary fan.

The late games — just 17 out of 64 — start at 2am Singapore time. The rest will be played between 6pm and midnight.

Having World Cup football on prime time television is a big factor why local pubs and eateries are sparing no efforts in bringing the best World Cup experience to their patrons.

“The timings of the games this year are just nice. We can incorporate the games into our entertainment programme that runs from 6pm to 4am on weekends,” said 1-Altitude general manager Ian Sim, whose al-fresco bar at One Raffles Place will be screening the World Cup for the first time.

A Harry’s spokesperson agreed, saying: “The World Cup is an exciting time for us as it only takes place once every four years.

Most matches (this year) start in the evening, after office work hours. With this year’s favourable timings, we are looking forward to a bigger turn-out.

The chain said the projected 20 per cent increase in revenue will more than make up for the costs of television broadcast packages, liquor licences, additional food and drink supplies, and additional manpower needed for their extended operating hours.

The bars under the Muddy Murphy stable have installed six to eight big television screens at their premises, bracing itself for a 30 per cent increase in footfalls.

“It’s controlled rowdiness. There is a lot of spectator jeering, shouting. Of course, it is a pub so we expect that. That’s what people come for.”

Newer establishments, like Cafe Football Singapore which opened early last year at Woodleigh Park, are also muscling in for a piece of the pie.

Owned by former Manchester United stars Gary Neville and Ryan Giggs, the football-themed restaurant has fully decorated its interior with World Cup jerseys and flags, on top of its United-dominated memorabilia — hoping to offer fans a different visual experience.

In order to entice customers, establishments are dangling various promotions and special events.

These include deals on food and alcohol leading up to and during the matches, as well as mini competitions such as guessing the first player to score a goal during a game and scoring a free pint.

Football-themed menus and special cocktails are also being concocted in numerous restaurants and bars. Fast-food chain McDonald’s, which has shown World Cup matches here since 2006, has introduced such as Chicken Pizza Kicks and returning favourite Sausage McGriddles just for this World Cup period.

The food and beverage industry is not the only one that stands to benefit from the World Cup.

Retailers are in for a windfall as fans have been parting with their cash for the latest jerseys, memorabilia and, make no mistake, football stickers.

Sports retailers said that the tournament usually brings in an extra 30 to 200 per cent in sales. So far, the kits of traditional powerhouses like Germany and Brazil have been in high demand.

The jerseys usually cost upwards of S$100, depending on how one customises them with players’ names and tournament patches, but fans are not batting an eyelid.

“I’ve been a big Germany supporter since the 1970s and now my whole family are following their fortunes at this World Cup,” said Mr Jason Cheong, 54, who bought five of the latest German kit for his whole family.

The design is nice and we are proud to wear it and show our colours.

Demand for stickers with images of the World Cup players are also rising since they started retailing here in April.

Mr Navin Nambiar, a sticker collector and one of the administrators of the Facebook group Panini Swapsies Group - Singapore, said that most of the stickers have been sold out in 7-11 convenience stores. They can also be found at Buzz convenience stores and Premier Football outlets, among other locations.

Collectors seek to fill up their album — priced at S$3.90 — with the stickers of 682 players, managers and special “shiny” editions representing the 32 participating nations. Packets of five stickers retail for S$1.20 each. Alternatively, boxes of 50 packets go for S$60.

The closed Facebook group, now with more than 600 members, has tripled in size since the 2014 World Cup. The group facilitates the swapping of stickers among fans, and organises the occasional swap meet.

Mr Navin attributed this growth to “unexpected demand” following the 2016 Uefa European Championship. “The distributors (of the stickers) are trying to bring in more stock now because it’s selling so fast,” the 37-year-old said.

While consumers have shown willingness to spend during past editions of major football tournaments, a constant bugbear is the ever-increasing TV subscription fees for these games.

This year, three local broadcasters — Mediacorp’s Toggle, Singtel and StarHub — announced in April that they are teaming up for the first time to bring a complete World Cup coverage to Singapore.

The price of S$112.35 — a package which allows fans to access the broadcast from their television sets and mobile devices — is unchanged from what fans have had to pay during the European Championships in 2016.

But it is the added value that is the game-clincher. For example, Mediacorp will also be screening nine matches, including the semi-finals and final, on their free-to-air okto channel — five more than previous years.

The package also gives fans access to a comprehensive World Cup site offering insights like team profiles, player information, the latest scores, rankings and match highlights, on top of a studio show “capturing all the action and drama of the World Cup”, which will be shown on the three broadcasters’ channels every match night.

The show will feature extended live feeds from the stadium and analysis of key moments with football personalities pre-match, at half-time and post-match. Parts of the presentation will be enhanced with augmented reality, Mediacorp said.

“For once, there is no price increase. And we can view the matches on our mobile devices anytime we want so I think it’s good value for money,” said fan Alexandria Lee, 42.

The World Cup happens once every four years so I’m happy to pay for it. I don’t want to miss out.

While Mediacorp declined to reveal the number of subscriptions it has secured so far, its head of digital products and technology Anil Nihalani said the take-up rate has been “good”.

“We continue to see strong interest as the clock ticks closer to the opening match,” added Mr Anil.

Mr Goh Seow Eng, Singtel’s managing director of Home and Consumer Singapore, said that they are seeing “strong take-up of our Fifa World Cup packs”. “We urge fans to sign up at their earliest convenience to avoid the last minute rush before kick-off on June 14,” he added.

On the corporate end, prices of World Cup business television packages have also remained unchanged since 2014.

Despite the subscription prices holding steady, some coffee shops said that they are not planning to screen the matches, mostly because of noise complaints from residents living close by.

Mr Andy Wong, owner of Wan Jin Coffeeshop in Serangoon, said he has not signed up for the World Cup package since 2010.

File photo of a coffeeshop.

“We had many complaints from the block upstairs about the ruckus during the World Cup… Now, you also can’t buy beer after 10.30pm. It doesn’t benefit us,” he said in Mandarin.

Chairman of the Foochow Coffee Restaurant and Bar Merchants Association Hong Poh Hin said that most of the 400 coffee shops under the association have also been deterred by complaints from residents. Only “a few” 24-hour ones have subscribed to the World Cup package.

Over at Tang Tea House, its vice-chairman Sylvia Ler said that they used to screen World Cup matches every year at the Simpang Bedok outlet, up till this year. The Land Transport Authority has banned them from placing additional chairs on the road outside the eatery for fans to sit and watch the games from.

Ms Ler added that they are still contemplating whether to screen matches at the newly-opened Changi Village outlet, where they show games from European football leagues. Tang Tea House has two other eateries at Jalan Kayu and Jurong West.

However, she said it may not be financially worth it, given that the Changi Village outlet closes at 2am on weekends and midnight on weekdays.

“We can’t show all the matches but we still pay the same price for the package,” she said.

We would open later last time till the matches finished, and it took a toll on our workers.

ONE FOR THE COMMUNITY

For some, the value of the World Cup is more than just boosting the bottom line.

Football, after all, is widely regarded as a social glue that brings people together. And entities like People’s Association (PA) recognise that.

On Monday (June 4), the PA announced that fans can follow the action at 55 Community Clubs(CCs) and Our Tampines Hub (OTH). Fans can also catch live screenings at the Sports Hub’s OCBC Square, all six Safra clubs, and Changi Airport’s Terminal 3.

A PA spokesperson said that, given the favourable match timings, the organisation expects a total turnout of at least 600,000 fans compared to about 570,000 in 2014.

They had started screening matches at 30 CCs back then, the spokesperson said, but the number almost doubled to 58 when more CCs came on board following “overwhelming response”.

A man watches a television projection of a live telecast displaying the opening ceremony of the 2014 FIFA World Cup in Brazil, on Jun 13, 2014 at Hong Lim park community club in Singapore. (File photo: AFP/Roslan Rahman)

“Watching World Cup at the CCs with your neighbours is as close an experience as we Pioneer Generation can get in the 1970s, when residents come together to watch television downstairs,” said a 67-year-old retiree living in Tampines who only wanted to be known as Madam Tan.

“It’s a throwback to simpler times, when people communicate more, socialise more, regardless of race, language or religion.”

“I’m really looking forward to this. Even though I know nothing about football.”