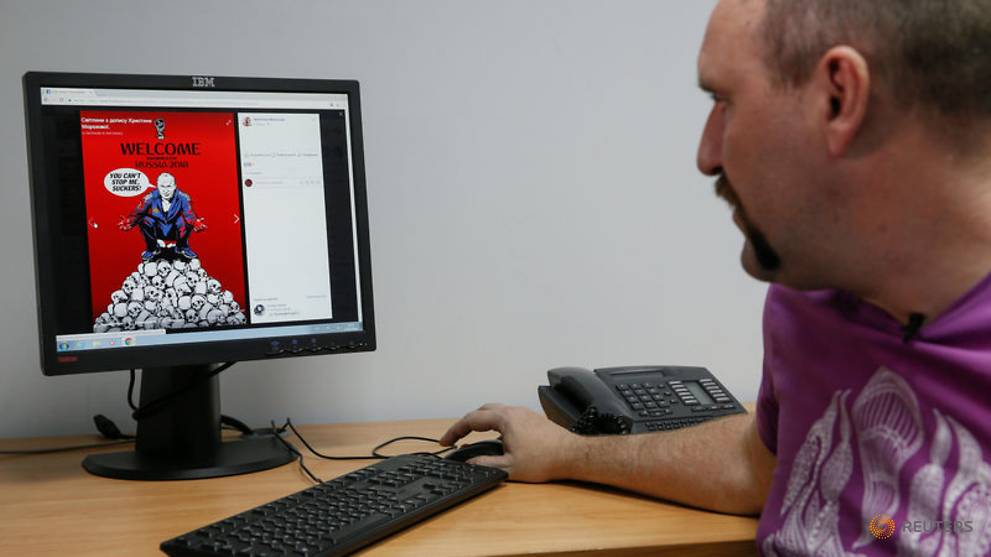 Soccer players at the World Cup will not be kicking skulls around the field, but that is what they are doing in posters created by a Ukrainian artist as a protest against the event being held in Russia.

Ukrainian artist Andrii Yermolenko shows one of his posters on his Facebook page during an interview with Reuters in Kiev, Ukraine June 13, 2018. REUTERS/Valentyn Ogirenko

KIEV: Soccer players at the World Cup will not be kicking skulls around the field, but that is what they are doing in posters created by a Ukrainian artist as a protest against the event being held in Russia.

Andrii Yermolenko's black and red artwork and the hashtag BoycottWorldCup2018 have gone viral in Ukraine, whose relations with Moscow collapsed in 2014 over Russia's annexation of Crimea and its support for separatists in eastern Ukraine.

Some of the images blend soccer scenes with references to Aleppo in Syria or the poisoning of Russian double agent Sergei Skripal.

"The main thing is for this to go viral and be shared across the networks. This was not an appeal to Ukrainian or Russian society, but rather an appeal to European society and English-speaking people," Yermolenko told Reuters in an interview.

"They say football is sacred and the fact that (Russia) is a bandit - that we have to just live with it ... I couldn't be silent."

Yermolenko posted the pictures on Facebook and they have since been shared by Ukrainian activists and state officials.

On Tuesday, Ukrainian foreign ministry spokeswoman Mariana Betsa retweeted one which shows a soccer player kicking an explosive projectile into an aeroplane - an allusion to the downing of flight MH17 over territory held by pro-Russian separatists in 2014.

The campaign to boycott the World Cup prompted some lawmakers to propose banning the matches from TV, but the motion did not get enough support when raised in parliament on June 7.

On Wednesday, a few dozen activists protested outside the Russian embassy in Kiev, some carrying Yermolenko's posters.

Kiev resident Maria Guresh held a picture of a player kicking a soccer ball in the direction of a blindfolded man kneeling in front of a pit filled with bodies.

"The tournament is happening in Russia which is being so aggressive and this poster is a symbol of this," she said.

In Russia, jailed Ukrainian film director Oleg Sentsov is on hunger strike in an effort to highlight Russia's human rights record while the World Cup has attention focused on the country.

The tournament kicks off on Thursday with a match between Russia and Saudi Arabia. Ukraine's national side did not qualify.