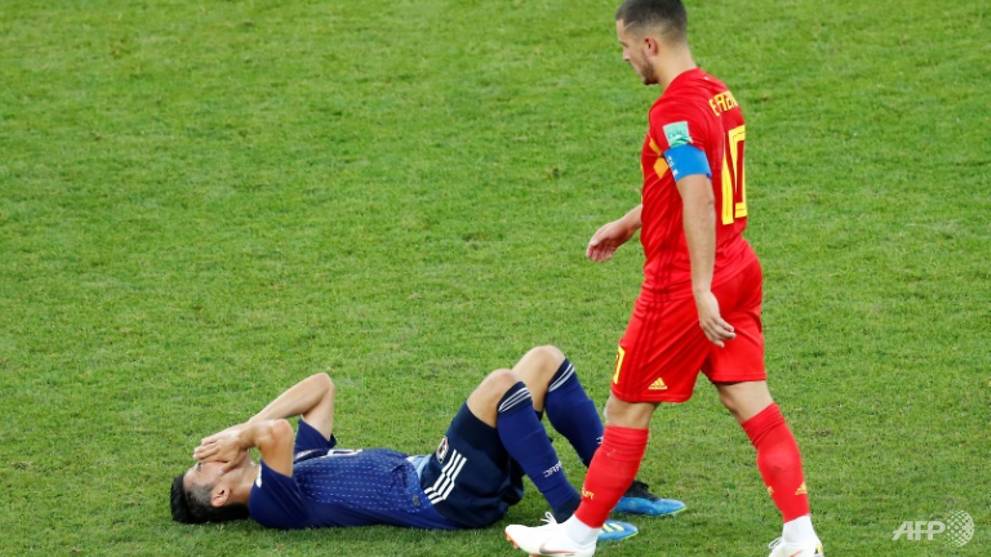 Japan ‘sad but proud’ after bravely bowing out of World Cup

The unfancied Samurai Blue were two goals up at one point against star-studded Belgium but eventually crumbled - and also ended Asian participation in the tournament.

ROSTOV-ON-DON, Russia: For a moment - 17 minutes, to be exact - there was hope. Hope that Japan would finally win a knockout game at the World Cup after two failed tries; hope that this edition’s knack for upsets would somehow impel the underdogs and unnerve favourites Belgium the way hosts Russia conquered Spain a day before.

It was not to be, as the Samurai Blue on Monday (July 2) surrendered a deserved two-goal lead to concede - also deservedly - three in a row and crash out of the tournament, taking the Asian continent’s hopes with them.

“I’m very sad,” said Japanese fan Hirano, 26. “But Belgium is very strong and for us to go this close to winning, I’m also very proud."

Compatriot Chiyo, 43, said: “The players did really well, but Belgium showed they were the better team than us by fighting back.”

“I was really wishing we would win, but ... I’m disappointed it ended badly."

Yet many - including this reporter - had predicted a far worse outcome for a modest, world No. 61 Japan at the hands of No. 3 Belgium, a formidable outfit packed to the hilt with talent already burdened by a “golden generation” tag.

After opening their campaign with a table-topping nine goals and just two let in, such was the confidence in the Red Devils that the pre-match conference was filled with questions on Brazil, their next - first presumed, later confirmed - opponent.

So when it remained goalless as the referee blew for half-time against Japan, the doubt and frustration was plain to see - Belgian defensive lynchpin Vincent Kompany, with brows furrowed, was spotted kicking the ball high and away.

Japan’s final group stage match had been marked by controversy as coach Akira Nishino instructed his players to close shop and not give away any bookings in the final minutes, despite being a goal down against Poland.

The move paid off and with fewer yellow cards than Senegal, the team - though booed off the field - earned the dubious distinction of being first in World Cup history to progress due to fair play.

While defending his negative tactics, Nishino acknowledged that spectators had been “shortchanged” and promised to “pay it back” against Belgium.

He made good on his word as Japan took the game to Belgium in disciplined, composed fashion. Unperturbed by a series of close shaves courtesy of the vaunted attacking trio of Eden Hazard-Romelu Lukaku-Dries Mertens, skipper Makoto Hasebe and co. responded in kind by carving out chances of their own.

Too often though they were let down by a misplaced pass, as well as the inability to extract from a sticky situation or negotiate the last defender in a quick counter.

"Japan is always organised, with very good teamwork,” said 32-year-old supporter Suzuki, ahead of the game. “But the players are lacking in individual skill."

After emerging from the break, his countrymen proved him wrong - twice - in the space of four minutes.

Capitalising on a botched interception by Jan Vertonghen, winger Genki Haraguchi took his time to place a low shot out of Thibaut Courtois reach - Japan’s first ever goal in a World Cup knockout game. Then Haraguchi’s equal on the opposite flank, Takashi Inui, lashed one in from outside the box to complete a dual showcase of exquisite technique.

The sleepy Rostov Arena roared to life as it smelled blood and some of Belgium’s elite, visibly stunned, must have flashed back to the shock 3-1 quarter-final loss to minnows Wales at Euro 2016.

Yet Hazard had also promised earlier that this was a different, more mature side and Roberto Martinez’s men coolly regrouped to demonstrate why they’ve been unbeaten for a record 22 straight matches.

Smoothly, ruthlessly Belgium found the net thrice via the England-based trio of Vertonghen plus substitutes Marouane Fellaini and Nacer Chadli - breaking Japanese hearts for the third time, after a 0-1 home loss to Turkey in 2002 and a 2010 penalty shootout elimination by Paraguay.

CAN ASIA DO BETTER?

Outside the stadium, crestfallen fan Tomoko said, somewhat harshly: “Japan is good together, good as 11 persons. Individually, the mentality is weak.”

But Suzuki pointed out that “Japan was not expected to come to the round of 16 anyway”.

“So, it’s a great achievement already,” he added. “But I’ll say, it looks tough to catch up with the other countries.

“Right now, it’s just not possible for an Asian country to do better than South Korea did in 2002, by reaching the semi-finals and finishing fourth.”

Suzuki continued, unprompted: “Maybe in 16 years or so, China will get better. It’s spending a lot of money and it’s serious about it.”

The superpower, omnipresent at this year’s World Cup despite not qualifying, has already announced plans to host the tournament one day as it continues to pour cash into both domestic league and public infrastructure.

Tomoko hedged her bet instead on Iran being the Asian country with the best chance of making the final and winning the Cup someday. Coached by Carlos Queiroz since 2011, “Team Melli” failed to get out of the group stage in Russia but impressed by beating Morocco, frustrating Cristiano Ronaldo’s Portugal to a draw and losing to Spain by just one goal.

For teenage fan Kei and his father Koji, however, only one country is capable of bringing greater glory to the continent.

“Didn’t you see how we almost beat Belgium, the best team in the world right now?” said Kei as he flicked aside his peroxide fringe. “I tell you - one day, Japan. One day.”