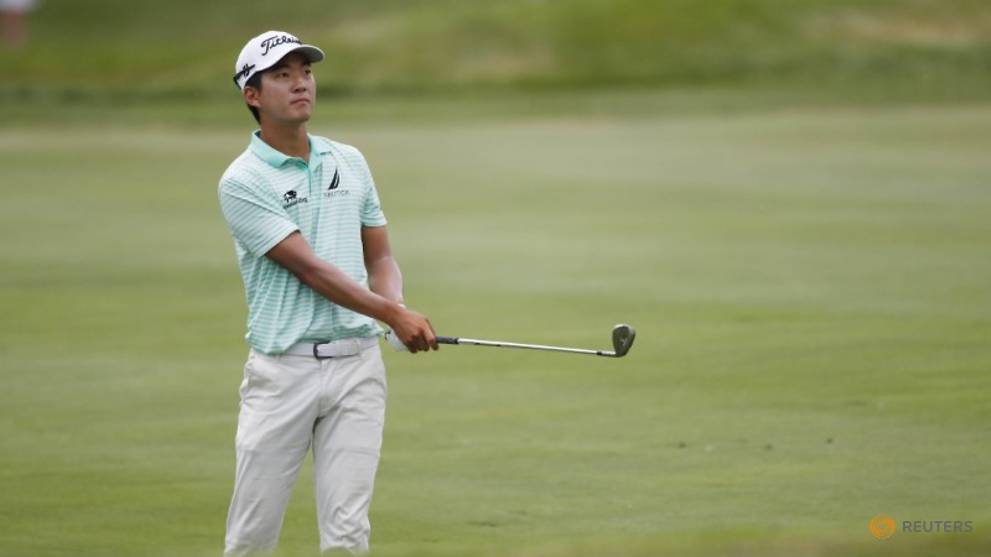 American Michael Kim forged a four-stroke lead through 17 holes before play was suspended due to inclement weather at the John Deere Classic in Silvis, Illinois on Friday.

REUTERS: American Michael Kim forged a four-stroke lead through 17 holes before play was suspended due to inclement weather at the John Deere Classic in Silvis, Illinois on Friday.

The South Korean-born Kim racked up eight birdies to surge past first-round leader Steve Wheatcroft on a day when action was halted twice by rain and lightning warnings.

Play will resume early on Saturday to conclude the second round before the third can commence.

Kim, who shot an eight-under 63 in the first round, had reached 16-under-par for the tournament and was on the 18th hole when the players were called in for a final time.

Canadian David Hearn (64), and Americans Wheatcroft (68) and Johnson Wagner (66) were in a three-way tie for second at 130 after completing their rounds.

Journeyman Wheatcroft, the overnight leader after recording nine birdies in an opening 62, lost his way after reeling off five more birdies in his opening nine holes on Friday.

Playing the back nine first, he made the turn in 31 strokes, putting him five-under for the day and at 14-under for the tournament, before his progress stalled.

The American suffered his first bogey of the tournament when he three-putted the second hole, his 11th, and dropped another shot on the next as Kim, playing behind him, began his surge.

Wheatcroft briefly rallied with a birdie on the par-four fifth but another bogey at his last sealed a disappointing end to the day.

Hearn, who was among the early finishers, managed eight birdies, with a lone bogey at the ninth representing his only blemish. Wagner, meanwhile, mixed seven birdies with two bogeys.