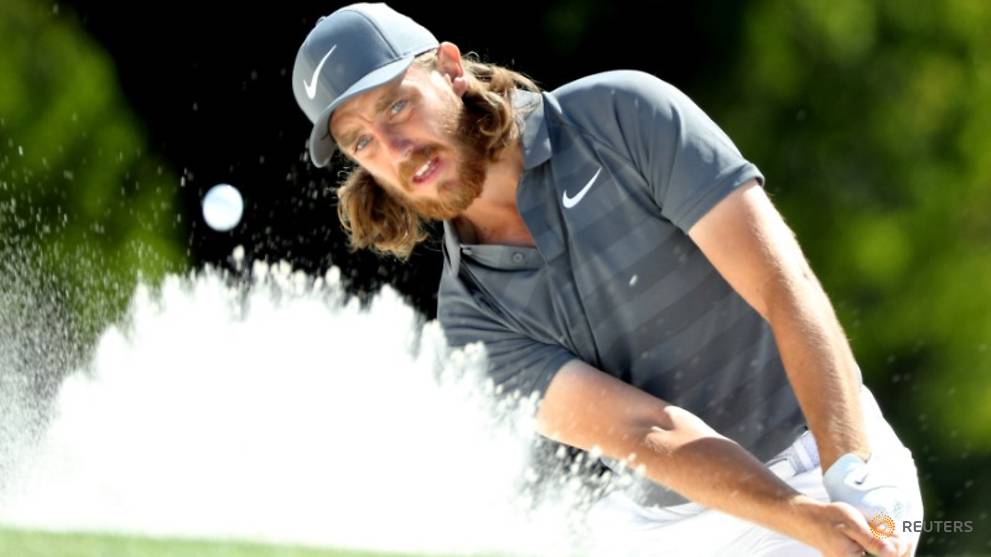 England's Tommy Fleetwood has proved he is the "real deal" in the past 18 months and is ready to take the next step in his career development by landing a first major victory at next week's British Open, according to Tony Jacklin.

FILE PHOTO: Tommy Fleetwood of England hits from a sand trap on the 18th hole during first round play of the 2018 Masters golf tournament at the Augusta National Golf Club in Augusta, Georgia, U.S., April 5, 2018. REUTERS/Lucy Nicholson/File Photo

LONDON: England's Tommy Fleetwood has proved he is the "real deal" in the past 18 months and is ready to take the next step in his career development by landing a first major victory at next week's British Open, according to Tony Jacklin.

Fleetwood topped Europe's money-list last year and has continued to build on the best season of his career by successfully defending his Abu Dhabi Championship title and finishing one shot behind American Brooks Koepka at last month's U.S. Open.

"I like Fleetwood and I expect him to do something special," said Jacklin, winner of the 1969 British Open and 1970 U.S. Open.

"I thought he was unlucky at the U.S. Open. He succumbed on the third day when the USGA organisers put the pins in stupid places. He shot a 78 while Koepka managed a 72 so that was the big difference.

"But Fleetwood's 63 on the final day was virtually flawless. He's come a long way in the last 18 months or so and the combination of his good play and the support he's going to get from the British galleries will stand him in good stead," Jacklin told Reuters.

"He hit every green bar one on the final day and his ball- striking has come on leaps and bounds."

Sharing the spoils in two separate toe-to-toe tournament confrontations with future world number one Dustin Johnson at the start of last year appeared to spark a transformation in Fleetwood's game.

The Englishman pipped Johnson to the title in Abu Dhabi before the big-hitting American turned the tables on him by winning the WGC-Mexico Championship.

Jacklin says he particularly likes the way the 27-year-old Fleetwood, who is ranked 10th in the world, uses his putter.

"He really seems locked in with the short stick, the way he pushes that right wrist forward in that claw-type grip of his," explained the 74-year-old Englishman. "It seems as though he really owns that putting stroke.

"That sort of thing helps your self belief. Tommy has great self-confidence and he's quite simply the real deal now," said Jacklin, who together with Shelby Yastrow has written a new fictional book entitled 'Bad Lies' that is available on Amazon.

"He is probably as good a player as there is out there right now who hasn't yet won a major. He is definitely one of my picks for next week."

One of the most important ingredients needed to mount a title challenge in a major championship is a good first round, said Jacklin.

"If you shoot an ordinary score in the opening round and are back in the pack, in 40th place or something, the first thing you are looking at is making the cut, just trying to be there for the weekend," he added.

"But if you've shot yourself into the top-five on the leaderboard going into the second round you get engaged at a higher level. You really get zoned in, especially at a major, and it gives you a lot of confidence moving forward.

"I got a lot of hometown encouragement in 1969 because I was back after playing a lot in America. It's the same as what Fleetwood has been doing and it's always nice to come home and be appreciated by the fans," said Jacklin.

"If you've really got it in you, a player will rise to that. It's like being any top sportsman or actor. Those guys are performers and they perform best in front of their home crowds."