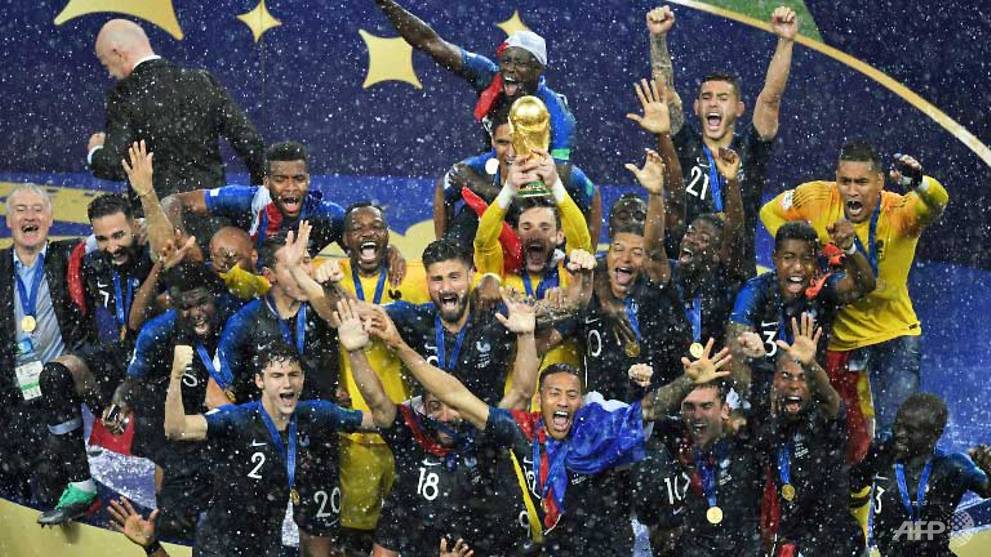 France's goalkeeper Hugo Lloris holds the trophy as he celebrates with teammates at the end of the 2018 World Cup final football match between France and Croatia. (GABRIEL BOUYS/AFP)

MOSCOW: France won the World Cup for the second time in spectacular style on Sunday (Jul 15) as a 4-2 victory in one of the most entertaining and action-packed finals for decades ended battling outsiders Croatia's dreams of a first title.

After an early own goal by Mario Mandzukic France's big guns delivered on the biggest stage of all as Antoine Griezmann - with a penalty awarded after a VAR review - Paul Pogba and teenage tyro Kylian Mbappe all hit the target.

Ivan Perisic and Mandzukic replied for Croatia, who ended beaten but unbowed after making much of the running in their first appearance in the final.

It was the highest-scoring decider since England beat West Germany 4-2 after extra-time in 1966 and the highest in normal time since Brazil defeated Sweden 5-2 60 years ago.

There were as many goals in 90-action-packed Moscow minutes as in the last four finals combined, and three of those went to extra time.

The game featured the first final own goal and the first VAR-decided spot-kick - one that Croatia were furious about and that was arguably the turning point of the game.

But the only statistic France will really care about is that the result makes them world champions for the second time following their triumph on home soil in 1998.

Having lost the 2006 final on penalties to Italy, it also meant there was no repeat of two years ago when they were beaten in the European Championship final by Portugal in Paris.

The win means Didier Deschamps, captain of the 1998 side, becomes the third man to lift the World Cup as player and coach after Brazil's Mario Zagallo and Germany's Franz Beckenbauer.

French players throw France head coach Didier Deschamps into the air celebrating at the end of the final match between France and Croatia at the 2018 World Cup. (AP Photo/Thanassis Stavrakis)

"How marvellous," Deschamps said having been carried shoulder high around the pitch by his players in a post-match downpour. "It's a young team who are on the top of the world. Some are champions at the age of 19.

"We did not play a huge game but we showed mental quality - and we scored four goals.

"It hurt so much to lose the Euro two years ago, but it made us learn too and we worked so hard for 55 days here."

Croatia started full of energy but went behind in the 18th minute when a Griezmann free kick skidded in off the head of Mandzukic, who had scored the extra-time winner against England in the semi-final.

That meant it was the fourth successive knockout game in which Croatia conceded first but again they found a way back as Perisic, who got the equaliser against England, smashed in a low shot 10 minutes later.

But then came the moment which will keep the VAR debate at the top of the sport's agenda.

Perisic flapped an arm at a corner and after Argentine referee Nestor Pitana conducted a protracted VAR review he awarded the 28th penalty of the tournament, another record.

Referee Nestor Pitana from Argentina gesture for a VAR review during the final match between France and Croatia at the 2018 World Cup. (AP Photo/Francisco Seco)

Ignoring more Croatian protests, Griezmann stroked the ball home in the 38th minute for his fourth goal of Russia 2018.

That made it the highest-scoring first half since 1974, when West Germany led the Netherlands 2-1 - also the final score - but this time there was more to come.

Croatia were on top again after the break but France held out and went 3-1 up on the hour as Mbappe and Griezmann combined to set up Pogba on the edge of the box.

The midfielder's right-footed shot was blocked but he quickly and coolly curved the rebound in with his left.

Six minutes later Lucas Hernandez tore down the left to set up Mbappe to drill home a low shot as the 19-year-old young player of the tournament claimed his fourth goal in Russia and became the first teenager to score in a final since Pele in 1958.

After three successive extra-time knockout games the chances of Croatia coming back again looked impossible but they were thrown a lifeline by Lloris, who tried to dribble round Mandzukic only for the striker to block the ball and send it into the unguarded net.

Croatia, beaten by the French in the semi-finals in their first World Cup appearance in 1998, continued to press but their energy was sapped and France safely held out.

Croatia's shirtless fans rightly saluted their players as torrential rain lashed down on the presentation ceremony and coach Zlatko Dalic had few regrets.

"We are sad but proud at the same time," he said. "We played well but the penalty knocked the wind out of us and after that it was very difficult.

"The French did not surprise us, we let in two soft goals coupled with an own goal and a penalty. We wanted to win the World Cup so much but that's football."