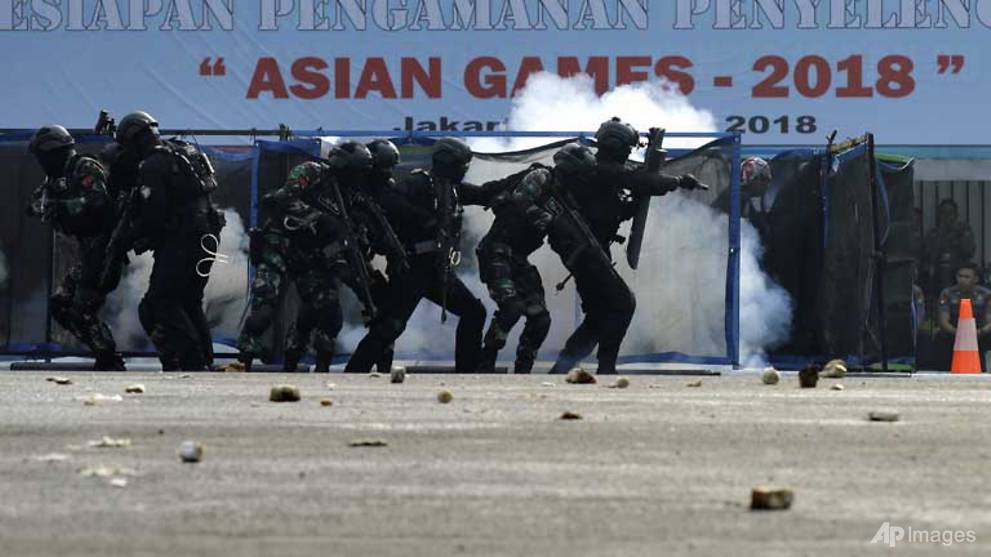 Indonesia beefs up security ahead of Asian Games

Indonesian police and soldiers during an anti-terrorist exercise as part of security preparations for the 2018 Asian Games in Jakarta and Palembang. (AP Photo/Achmad Ibrahim)

Some 40,000 troops and police officers will deployed in the capital Jakarta and Palembang in Sumatra, which are co-hosting the Aug 18 to Sep 2 Games.

Another 10,000 police officers will be on standby in Jakarta, while hundreds of CCTV surveillance cameras have been installed inside and outside sports venues.

"Preparations are going well and we are ready to safeguard the Asian Games," national police spokesman Yusri Yunus told AFP.

Security would be tightened at public places including airports, malls, hotels and tourist spots, he added.

Indonesia suffered its most deadly terror attack in more than 10 years in May when suicide bombers killed 13 people in the nation's second-biggest city Surabaya.

Karnavian said 242 suspected terrorists have been arrested since the attack, which reignited concerns about Islamist militants in the Muslim-majority nation.

Police say they have been rounding up terror suspects and petty criminals in a pre-Games crackdown.

Some 700 street criminals have been arrested and 15 were shot dead for resisting arrest, according to police.

Earlier this week more than 500 elite members of the army, navy and air force conducted security drills in Jakarta.

More than 11,000 athletes from 45 countries are set to compete at the second-biggest multi-sport event behind the Olympics.