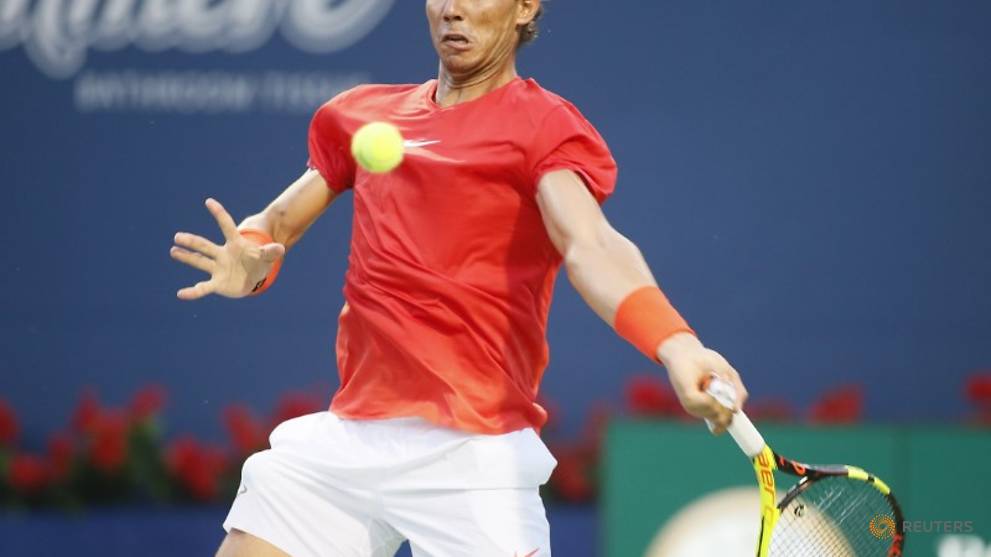 Nadal routs Paire to reach third round in Toronto

Rafael Nadal was made to wait before his second-round Rogers Cup match due to several rain delays but did his part to put the schedule back on track with a speedy 6-2 6-3 win over Frenchman Benoit Paire on Wednesday.

TORONTO: Rafael Nadal was made to wait before his second-round Rogers Cup match due to several rain delays but did his part to put the schedule back on track with a speedy 6-2 6-3 win over Frenchman Benoit Paire on Wednesday.

World number one Nadal, who kicked off the evening session a little over an hour after its original start time, had some issues with his serve later in the match but still needed only 74 minutes to secure his spot in the third round.

Nadal came out firing a dazzling array of shots that had Paire racing around the blue hard court from the outset and even desperately launching his racquet on one occasion in a failed attempt at a return that gave the Spaniard a 5-2 lead.

Nadal was made to work harder in the second where the players exchanged breaks over six consecutive games before the world number one finally held in the ninth to seal the match when Paire sent a service return wide.

"Of course I was not at 100 percent today," Nadal, 32, told reporters. "It's true that with my serve in the second set I had some troubles but my return was working well ... it was more about the mistakes from the baseline in my opinion."

In earlier action, a solid-serving Novak Djokovic kept his bid for a fifth Rogers Cup title alive with a 6-3 6-4 win over Canadian wildcard Peter Polansky.

The ninth-seeded Serb, competing in his first tournament since his Wimbledon triumph last month, won a dominant 83 percent of his first service points and wrapped up the day's opening match minutes before the first of several rain delays.

"I thought I served well in the moments when I really need it and I was looking for the first serve," said Djokovic.

"I thought I found pretty good accuracy and angles with the first serve, and also my second serve worked pretty well. Overall my game was so-and-so. In the moments when I probably needed to step it up, I did."

Next up for Djokovic in the round of 16 is Greek teenager Stefanos Tsitsipas, who upset Austrian seventh seed Dominic Thiem 6-3 7-6(6).

A win for Djokovic would set up a potential quarter-final clash with German second seed Alexander Zverev, who advanced to the third round after a 6-4 6-4 win over Bradley Klahn.