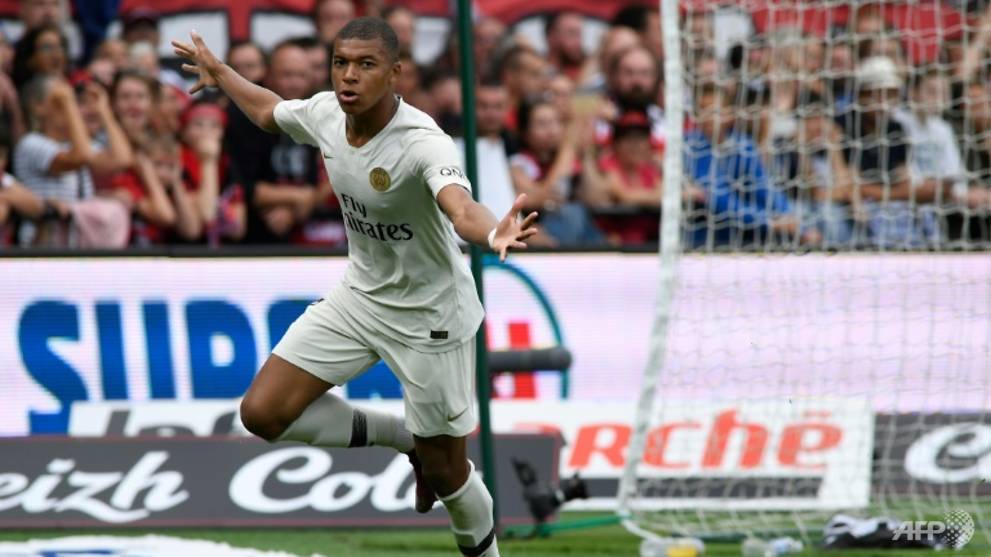 Football: Mbappe plays starring role on return to PSG side

PARIS: Kylian Mbappe marked his first appearance for Paris Saint-Germain since winning the World Cup by coming off the bench to score a late brace that gave the French champions a 3-1 victory at Guingamp on Saturday (Aug 18).

Nolan Roux had given the home side the lead in the Brittany sunshine, and only a combination of Gianluigi Buffon and VAR prevented Thomas Tuchel's side from being further behind at half-time.

But Mbappe came on for the second half and Neymar equalised from the penalty spot soon after, before the 19-year-old France starlet added two goals in the closing 10 minutes to secure the points.

"I have very big objectives, so there is no time to loaf around," Mbappe told Canal Plus at the end of the game.

"I brought something to the team but the whole side wanted to do better after a timid start to the match."

It is now two wins from two in Ligue 1 this season for PSG under new coach Tuchel, after they swept aside Monaco 4-0 to win the campaign-opening Champions Trophy in China.

"The situation is still difficult for us because the players are not on top form having arrived late after the World Cup," said Tuchel, who admitted his team had been fortunate not to be 3-0 down at half-time.

The capital side were again without a host of big names, including Edinson Cavani, the Uruguayan still not deemed fit to return after a calf injury suffered at the World Cup.

Tuchel again put faith in youth, just as he had done in last week's 3-0 win over Caen. Timothy Weah, the 18-year-old son of the great George Weah, was rewarded for his goal-scoring exploits off the bench in that game with a start here.

However, he was hauled off at the interval after a dreadful first-half performance from his side.

Buffon kept his team on level terms when he tipped a Roux effort onto the bar early on, but the veteran Italian goalkeeper was beaten 20 minutes in.

The goal came when Antoine Bernede's pass put his fellow teenager Colin Dagba in trouble - the full-back got caught in two minds and Marcus Coco intervened to play in Roux for his first goal for the club.

Paris were then grateful to the Video Assistant Referee for confirming on-field official Clement Turpin's decision to disallow a second Guingamp goal in the 25th minute.

Coco went round Buffon to set up Nicolas Benezet, but he was adjudged to have fouled Dagba just before heading in.

With Mbappe on, it was Neymar who levelled the scores with a 53rd-minute penalty he himself had won.

Neymar claimed a goal and an assist. (Photo: AFP/Loic Venance)

That was the Brazilian's second goal in as many games, but Mbappe's performances at the World Cup hinted that he could steal more of the limelight from the world's most expensive player this season.

In his first game since scoring in France's 4-2 final win over Croatia last month, Mbappe put PSG in front with eight minutes left after being set up by Angel Di Maria.

And he made sure of the points at the death with a delightful dink over Guingamp's Swedish goalkeeper Karl-Johan Johnsson, with Neymar this time providing the assist.

That goal even drew applause from the Guingamp fans, mindful of the youngster's role in France's glorious campaign in Russia.

"It was top to have Kylian and to be able to bring him on," added Tuchel.

"It was not a surprise but the situation was completely different after he came on."

Meanwhile, Radamel Falcao had a second-half penalty saved as Monaco were held 0-0 at home by Lille, after Lyon suffered a 1-0 defeat at newly-promoted Reims on Friday.

He will be the man to watch at Ligue 1!