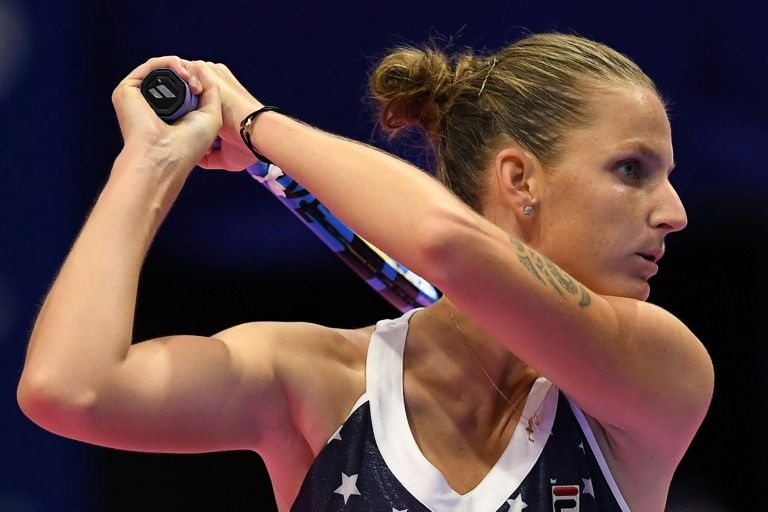 The fourth seed took just 63 minutes to complete a clinical 6-4, 6-4 victory over the newly crowned US Open champion in Tokyo, bringing Osaka's 10-match winning streak to a shuddering halt.

"I'm just happy it didn't go to three sets," said the Czech, who had been taken the distance in her previous three matches.

"My serve is my biggest weapon and it was key today," added Pliskova after scooping an 11th career title.

"Naomi was maybe a little bit tired, you could see that. But the future is bright for her and congrats to her for an incredible few weeks."

The players had split their previous two meetings, but Osaka started the final as favourite after her historic New York triumph.

And the third seed began in menacing fashion, thumping an ace down the middle on the first point and holding her first two service games to love.

But Pliskova slowly turned the screws and broke for 3-2 with a fizzing backhand which her opponent swished well wide.

The world number eight was soon a set to the good after unleashing another brutal drive. Osaka was caught flat-footed and dumped it into the net.

Osaka, the runner-up in Tokyo two years ago, climbed to seventh in the rankings after becoming Japan's first grand slam singles champion but she looked lost for ideas against Pliskova.

The 20-year-old buried her head in a towel during the changeover and things barely improved in the second set, Osaka whacking her racquet against her sneakers in anger at her wastefulness.

As the strain began to show, a dejected Osaka called for coach Sascha Bajin and groaned: "I feel so stressed out!"

Sensing blood, Pliskova broke for 5-4 after a poor Osaka drop shot gifted her an easy put-away. Moments later she delivered the coup de grace with a sixth ace which Osaka barely wafted her racquet at.

"I didn't want to try to overpower her because she just has more power than me," said Pliskova.

"I just wanted to be patient and wait for my chances."

For Pliskova, it was a first tournament victory since Stuttgart in April -- and the first since wedding long-time partner Michal Hrdlicka in the summer.

"The first one this year was before the wedding," smiled the Czech, who reached the top spot in women's tennis in July 2017.

"I'm just happy that I also have a title as a married woman."

A tearful Osaka could barely bring herself to speak at the trophy presentation.

"I've literally never felt more tired in my entire life," she told reporters, confessing that she needed some time off.

"The chances of me playing in the next tournament are very low."