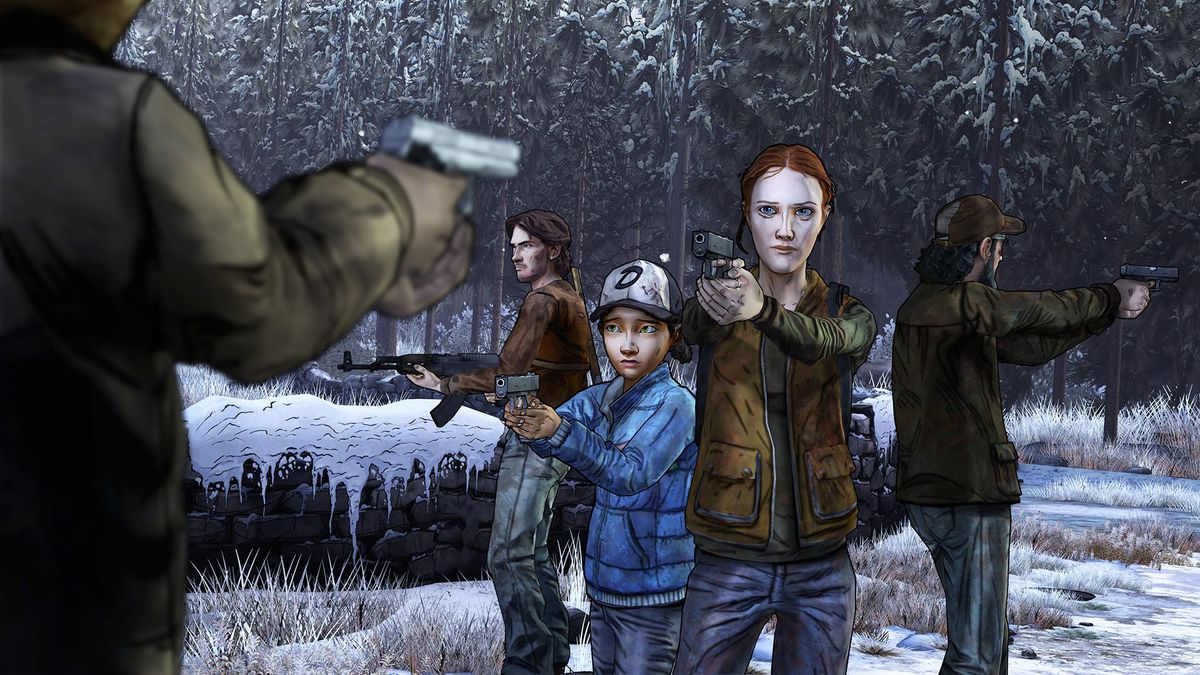 Jon Snow and Gared Tuttle at The Wall in Game of Thrones: A Telltale Series Telltale Games

This perspective contains spoilers for Game of Thrones, both the TV series and the Telltale video game.

When news passed late yesterday that Telltale Games had effectively shut down, dismissing all but a handful of artists, many thought first of The Walking Dead, and its fate. I thought of Game of Thrones.

The Walking Dead: The Final Season, which premiered in August, is said to be canceled, three days before its second episode was due to launch. It’s a poetically shocking demise for a series where the death of a treasured character was always on the table. For me, it was dispiriting to realize that after a few years of chatter, the second season of Telltale’s excellent adaptation of GoT would end up being another log in video gaming’s what-if fireplace.

Critically, Game of Thrones: A Telltale Games Series’ scores hovered around the kiss-of-death mid-70s. I don’t really care. It — not a show, not a book — was my first exposure to Westeros. The game was a lark offering on PlayStation Plus in July 2017 and it, not the seventh season’s premiere that month, enthralled me.

I was drawn to the Forresters, the minor clan and Stark allies written exclusively for this game. I became as bloodthirsty in my desire for vengeance for them as any hard-bitten fan ever was for Arya and her house. Though I didn’t know him fully, I knew Ramsay was a major character, and I recoiled from him, knowing I could not make him pay for killing Ethan Forrester. But Gryff Whitehill suffered dearly in his stead, I assure you.

The game ends on an anguishing cliff-hanger, though, and House Forrester nowhere near made whole. It ended up being a pitch-perfect indoctrination into Game of Thrones’ overall mood, seething with tension and delayed gratification. I bought a subscription to HBO Now the day after I finished it and began powering through the seasons. Telltale’s Game of Thrones should have spoiled large tranches of seasons one through five — it begins outside The Red Wedding, for God’s sake. But everything it revealed about the TV show left me wanting to know more, not less.

Despite playing more than three seasons of Telltale’s The Walking Dead, I was never drawn to AMC’s TV show for a single episode. Telltale Games

Until last summer, I’d spent years avoiding the TV franchise despite the raves of friends and colleagues. I had edited several Monday morning recaps and takes for Polygon in 2015 and 2016, and with those seasons effectively revealed, Game of Thrones, as a show, became I’ll-get-around-to-it TV for me. Well, Telltale Games finally got me around to it. Yet even playing everything it offered for The Walking Dead — including 400 Days and Michonne — I was never drawn to AMC for a single episode.

It’s probably because, while Game of Thrones: A Telltale Series is an original story with original lead characters, it is woven into the TV story where The Walking Dead’s three seasons (and its abortive fourth) wholly stand apart from both the comic book and the TV series. No, I wasn’t going to find any mention on HBO of Rodrik Forrester, or Gared kicking Britt off The Wall. But the sips of intrigue in King’s Landing and adventure in Meereen had me thirsting for more, and I had somewhere I could find it.

I doubt I was the only one who felt this way, although the numbers of those who did were clearly not strong enough to make a Game of Thrones sequel a Telltale priority. Still, my experience with that game, and my gravitation into Game of Thrones fandom, is why I consider it Telltale’s most complete success.

Video game adaptations of television and film — excepting Batman, Star Wars, Lord of the Rings (and Lego) — have a history as inconsistent as TV and film adaptations of video games. Atlus’ Game of Thrones RPG in 2012 was a dud. No one is clamoring for Overkill’s The Walking Dead shooter, whose November launch on PC will surely be the most overlooked release of the calendar. The great tragedy of Telltale Games is that it made these franchises work as both games and a story — even taking Game of the Year honors — and it meant nothing for the studio’s long-term fate.

Rights-holders license their works to video games for a number of reasons, and sure, the money a studio’s willing to pay to stomp around in a canon with a ready-made audience is a big one. But video games are also valuable in turning on new audiences to the shows and films. Telltale did more for Game of Thrones than Game of Thrones did for it, and The Walking Dead, too. And as Netflix shops, or more likely mothballs, the Stranger Things vehicle that was coming — assuming it can even find someone who’d do it half as well — you and I won’t be the only ones lamenting the loss of Telltale Games.