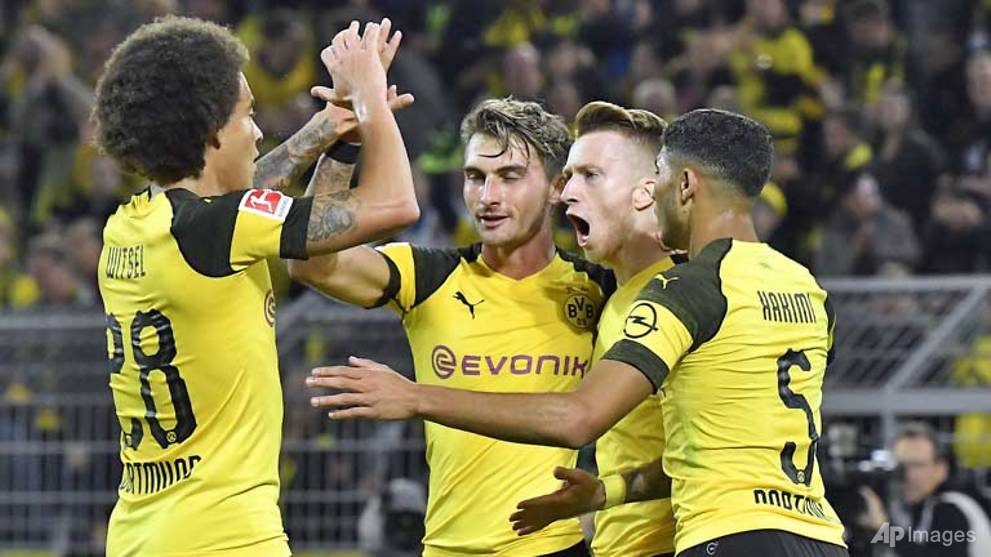 BERLIN: Teenager Achraf Hakimi scored on debut as Borussia Dortmund waltzed to a 7-0 win over Nuremberg on Wednesday (Sep 26) to keep the heat on Bundesliga leaders Bayern Munich.

Jacob Bruun Larsen's stylish finish gave Dortmund the lead early on, the Danish striker latching onto Christian Pulisic's through ball and lofting the ball over Fabian Bredlow in the Nuremberg goal.

With Dortmund in complete control, Marco Reus doubled the lead on 32 minutes, as his long range effort was deflected past a helpless Bredlow.

Hakimi's moment came just after half-time, as he rounded off a Dortmund counter attack by blasting the ball into the bottom corner from the edge of the box.

Reus added another a few minutes later, and Manuel Akanji picked up his first ever Bundesliga goal before substitutes Jadon Sancho and Julian Weigl completed the rout.

"We put pressure on them from the very first minute, did our job at the back and took our chances," Akanji told the official club TV channel.

"It was a great feeling to score my first goal for the club."

Borussia Moenchengladbach, meanwhile, are among those chasing Dortmund after they battled to a 3-1 win over Eintracht Frankfurt to go fourth.

Gladbach forced several saves from Kevin Trapp in the first half before Alassane Plea finally broke through in the 56th minute, the Frenchman rifling the ball in from a tight angle to grab his sixth goal in all competitions.

Thorgan Hazard doubled the lead with a sweetly struck finish ten minutes later, and though Ante Rebic's goal gave Frankfurt a flicker of hope, it was extinguished by Nico Elvedi's 85th minute header.

Elsewhere, RB Leipzig battled to a 2-0 win over Stuttgart, while Wolfsburg were held to a goalless draw in Mainz.

Captain Willi Orban put Leipzig in front on the stroke of half-time, tapping in the rebound after Kevin Kampl had forced a save from Ron-Robert Zieler.

Timo Werner had a goal ruled out by VAR in the second half before Jean Kevin Augustin whipped in Leipzig's second to seal the win.

Wolfsburg failed to take advantage of a comedy of defensive errors from Mainz.

Twice gifted possession in the first half, Josip Brekalo first struck the post on 23 minutes, and then fired the ball straight at Mainz goalkeeper Florian Mueller.

After a breaking the deadlock with a tap-in after half-time, Volland nodded in Kai Havertz's elegant cross to double the lead, and Rouwen Hennings late penalty was not enough to prevent a second win in a row for Leverkusen.