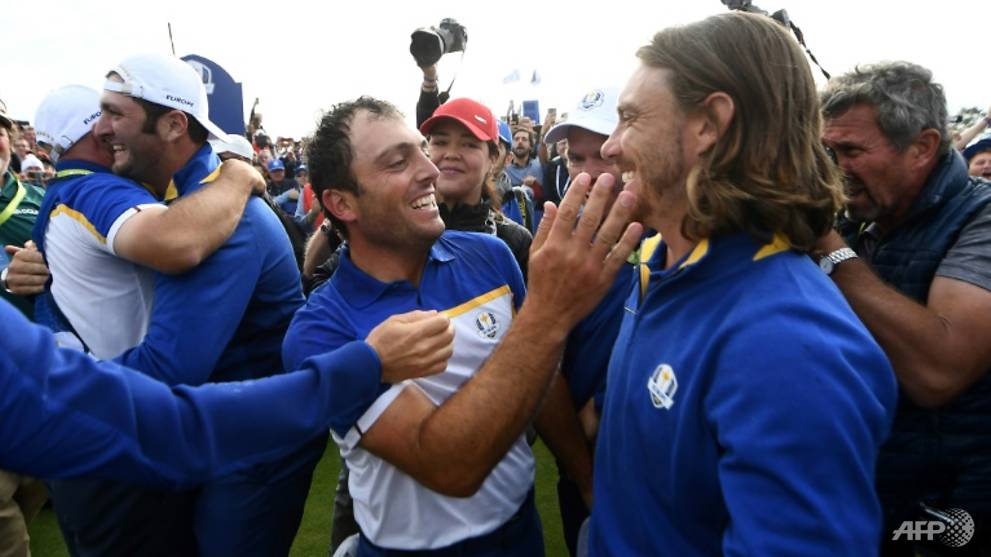 "It was amazing," Molinari said. "It's an incredible achievement. We did just an amazing job."

In the process, Molinari - who had been winless in six prior Ryder Cup matches - became the first European and only the fourth player ever to go 5-for-5 in a Ryder Cup and did so just two months after hoisting the Claret Jug.

"It feels great but it's not about me," he said. "It was about time to have them but it's about the group not the individual.

"I couldn't even dream of a summer like this."

Europe had seized a 10-6 edge in Saturday's foursomes and fourballs matches and needed only 4 1/2 points from Sunday's 12 singles matches to swipe the trophy.

The US team needed to match the greatest last-day comebacks in Ryder Cup history by taking eight singles points to keep the Cup, but there was no French magic like Europe's 2012 'Miracle at Medinah' or the Americans' 1999 victory in the 'Battle of Brookline'.

The Americans, who haven't won in Europe since 1993, lead the all-time rivalry 26-14 with two drawn but the Europeans' ninth victory in the past 12 attempts gave them an 11-8 with one drawn edge since expansion from a British-Irish squad after 1977.

Spain's Jon Rahm followed by downing Tiger Woods 2 and 1, keeping the 14-time major champion winless in four matches this week and snuffing out any US momentum.

'BEST FEELING OF MY LIFE'

Rahm, who led after all but one hole, pumped his fists and screamed with joy after his winning four-foot birdie putt, which came after a three-putt bogey at the par-3 16th, left Europe two wins from victory.

"To beat Tiger, one of the greatest players of all time, for the pivotal point, it's the best feeling of my life," Rahm said.

England's Ian Poulter, Europe's wildcard talisman, birdied the 18th hole to beat world number one Dustin Johnson 2-up and put Europe on the brink of victory.

That set the stage for Molinari to clinch the win after Mickelson found water at 16 and conceded.

Matches stood on a knife's edge deep into the afternoon, the Americans clinging to hopes as tension built across the back nine.

Four-time major winner Rory McIlroy endured a last-hole collapse and lost 1-up to American four-point rookie Justin Thomas in the opening match. McIlroy's tee shot plugged in a right-side bunker, his second rolled back into the sand and his third found the water. He surrendered the hole and match after failing to sink his bogey bid from the drop zone with Thomas on the green in two.

"I'm happy I got that point. I'm getting goosebumps talking about it," Thomas said. "It wasn't a fitting way for the match to end."

Third-ranked Brooks Koepka, this year's US Open and PGA Championship winner, halved with England's Paul Casey in a match neither led by more than 1-up.

"I threw a lot at him," Casey said. "It was a classic match. Very proud to turn that match around and grab that half point."

Webb Simpson followed with an eight-foot birdie putt to finish off Justin Rose 3 and 2 and US rookie Tony Finau closed with five birdies in his last eight holes in a 6 and 4 rout of England's Tommy Fleetwood to lift the Americans within 10 1/2-9 1/2.

Fleetwood flopped in his chance to become the first European to win 5-of-5 matches at a Cup.