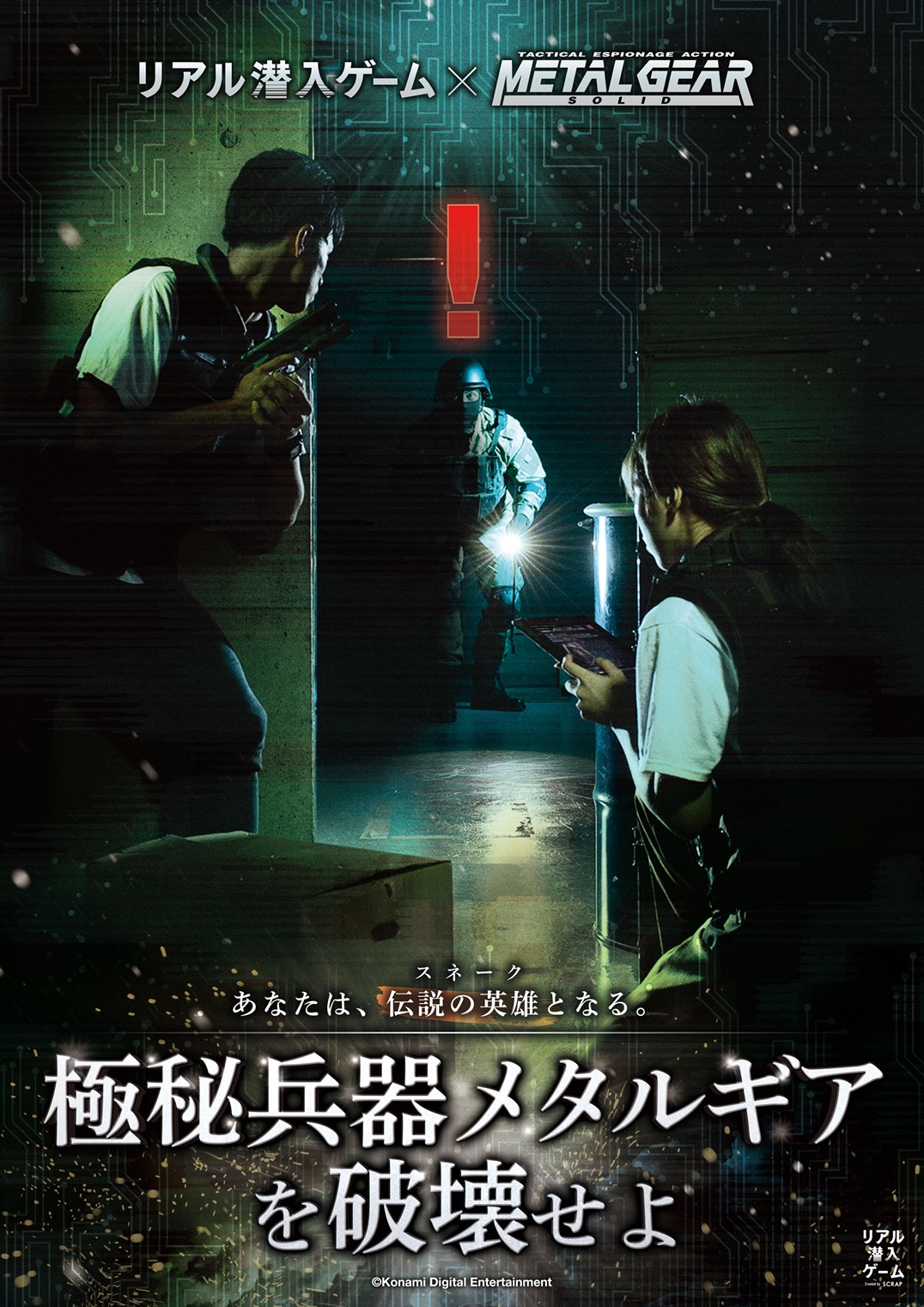 Even though my diminutive frame doesn’t quite fit inside the cardboard box, the armed guard patrolling the locker room fails to notice me as he walks his patrol route. Nor does the guard spot the nine other people hiding in the locker room. The three women in the lockers. The two men behind the stainless steel table. The four others also hiding in cardboard boxes and also hardly concealed. To be frank, the guard is miserable at his job, but that’s fitting, I suppose, for a real-life recreation of Metal Gear Solid.

Part escape-room, part laser tag, the IRL adaptation is the latest project to open at Tokyo’s Mystery Circus, a multi-floor entertainment space that specializes in what I can only describe as interactive theater. On other floors, players solve murder mysteries or escape a Godzilla attack. But me and my two teammate, we’re focused on infiltrating Shadow Moses, recreated as a handful of interconnected rooms filled with puzzles and one human guard.

Teams of one to three players are given a codex and 15 minutes to solve a handful of puzzles in the venue. Time can be added by locating rations, but time is taken away if spotted by the patrolling guard. When time runs out, it’s game over — unless each player pays another 800 yen — about $7.50 — to continue for another 10 minutes. Sure, this may be a “modern real-world” experience, but its payment schemes is a throwback to quarter-guzzling arcade cabinets.

The recreation is small — one large main room with a few smaller spaces that spoke outward — but its designers have included some nice touches. The main room is decorated like a general storage space, while other rooms feature more acute details. To enter one, you must jog past an automated turret, its invisible artillery depleting precious time from our 15-minute allotment. Another room is neatly organized as the guard’s break area and features a puzzle that requires you to break a code using dog tags hidden throughout the space.

Each zone has a handful of uniquely Metal Gear touches. As I hide in a locker, I find myself inches from bikini poster taped inside the door. When a guard enters a room, suspicious of a sound he heard, an exclamation point is projected above his head, and a countdown timer appears on the wall. Mission updates, provided via the tablet, resemble Metal Gear Solid’s iconic neon green Codex updates.

The guard does an admirable job of following the same path through the “level” all day, every day, nailing the predictability of the best artificial intelligence 1998 had to offer. The guard’s leisurely pace has the intended side effect of eating precious time. He lingers for what feels like hours (and is probably just a few seconds) in front of doors that access later areas of mission. One objective can only be completed by hiding in a special locker in the main area, waiting for the guard to pass by, then signaling him to speak a secret code by knocking against the locker door.

Unfortunately for our team, the guard’s reply can’t be deciphered through the locker wall, so after repeating this step three times, we decide to bend the rules. To its credit, the venue’s designers allow for our brand of creative problem solving. We need the door code from the guard, but we can’t get it (or really, understand it) so I do my best Snake and go stealth. I quietly follow the guard along his patrol route, step for step, a perfect shadow. When he enters the locked door, I shoot my arm out like a bolt of lightning and grab the handle just before it shuts. I wait a moment, then I slip through the door. In one utterly graceless motion, I dive (read: belly flop) onto the floor behind the guard and tuck myself beneath the aforementioned cardboard box.

It works! Once the guard leaves through another door, I let in the other two members of my team. We begin work on the next puzzle and… we’re out of time. Game over.

Mystery Circus provides most of the game in English, so while it felt like the game’s orders were unclear, I’m 75 percent sure our inability to complete some of the most basic puzzles is our own fault. Was it worth the 6,300 yen total (about $55 US) for three people to fumble through a fake warehouse for 20 minutes, nearly getting trampled by Tokyo teenagers who are dramatically better at the experience?

Should everybody else book a flight to Japan for the limited-time event? Maybe just hide in an Amazon box and call it a day.