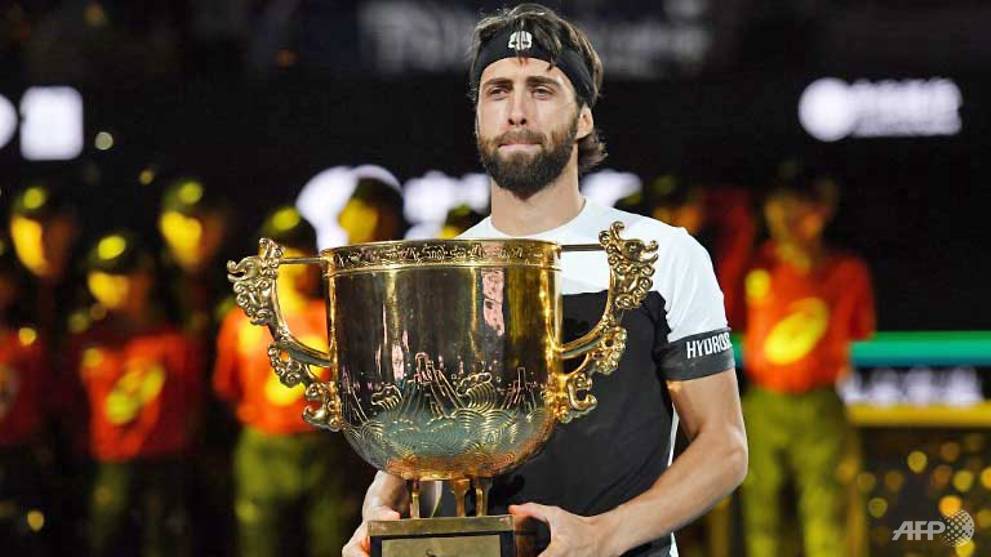 Nikoloz Basilashvili of Georgia poses with the trophy after winning the men's final against Juan Martin del Potro of Argentina at the China Open tennis tournament. (GREG BAKER/AFP)

BEIJING: Juan Martin del Potro said that he was battling illness after he suffered a shock defeat in the China Open final on Sunday (Oct 7), losing 6-4, 6-4 to unseeded Nikoloz Basilashvili of Georgia.

Caroline Wozniacki of Denmark kisses the trophy after winning the women's final match against Anastasija Sevastova of Latvia at the China Open tennis tournament. (NICOLAS ASFOURI/AFP)

Argentine top seed Del Potro was far from his best and has been fighting flu or a cold for several days in the Chinese capital.

The world number four said that he did his utmost in difficult circumstances.

"I did everything that I can to be better for the final, it wasn't enough time to feel 100 per cent," the 30-year-old said.

"As you can see, my game today wasn't as good as it was in the last matches in the tournament. I had some problem the last three days and it affected a little bit my game."

Del Potro, who reached last month's US Open final and is enjoying one of the best seasons of his injury-interrupted career, is now in a race to be better for this week's Shanghai Masters.

"I wasn't able to play with that fire that I have in all my matches," Del Potro added, saying however that 34th-ranked Basilashvili "played unbelievable".

It is only the second title of 26-year-old Basilashvili's career, having won his maiden ATP title in Hamburg in July.

"Playing against Juan, he was sick today for sure, I could see that," said the all-action Georgian.

"But he put me in really tough situations. I needed to really work it, to work hard, win the points."

There was to be no surprise in the women's decider.

Denmark's Wozniacki was impressive all week, never dropping a set and rarely looking troubled, sealing her spot in the WTA Finals Singapore in the process.

The 28-year-old, who won her first Grand Slam at the Australian Open at the start of this year, was imperious against the unseeded Sevastova.

"I'm just happy to have reached 30 today, I'm going to enjoy that," said Wozniacki, a former number one.

"As a little kid I had a dream of becoming a professional tennis player, becoming number one in the world.

"Then after number one in the world, I wanted to win a Slam, then I wanted to lift trophies.

"Having done everything, all of that, it's pretty amazing.

"I think I had a dream of that, but I don't know how realistic I really believed that was going to be."

Wozniacki, whose form has been patchy in the second half of the year, was ruthless on her serve and wrapped up the first set with an overhead smash to underline her superiority.

Sevastova, 28, will find herself just outside the top 10 in the rankings after her run.

"She didn't give me any presents, it was tough," said Sevastova, who retired in May 2013 because of persistent injuries, only to return in January 2015.