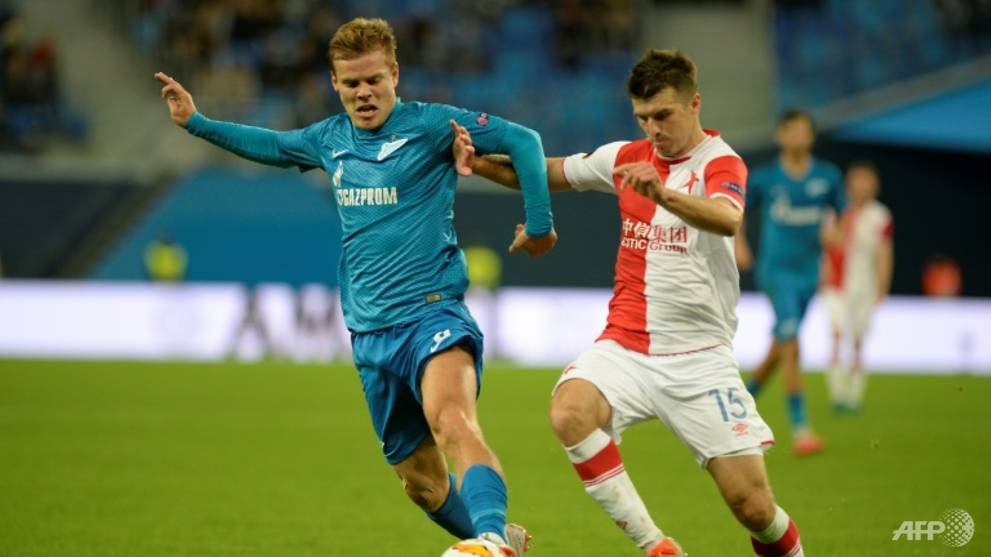 MOSCOW: Disgraced Russian football players Pavel Mamaev and Alexander Kokorin could face up to five years in prison for assaulting a government official at a Moscow cafe, in a case that sparked outrage in Russia on Tuesday (Oct 9).

The assault by the players - both former Russian internationals who have courted controversy in the past - has prompted the interior ministry to open a criminal probe while the Kremlin described the incident as "unpleasant."

Video footage showed one of the officials, Denis Pak, being hit with a chair while eating a meal. The players also reportedly hurled ethnic slurs at Pak, who is an ethnic Korean.

Before the cafe assault the footballers attacked the driver of a television host and damaged her Mercedes in a separate incident on Monday. The driver was hospitalised with injuries and a criminal probe was opened.

Public outrage quickly snowballed into a public shaming campaign on national television, which even published a list of Russian footballers who were convicted in the past.

"The Russian Premier League expresses its outrage and strongly condemns their (players') rowdy behaviour," it said in a statement.

"This act not only casts a shadow over the glorious names of FC Zenit and FC Krasnodar but all of Russian football.

"We believe that those responsible should be punished in the most severe way. There is no place for hooligans in football!"

"I think law enforcement agencies will qualify this as hooliganism and punishment for this is quite severe - up to five years in prison," Igor Lebedev, a member of the Russian Football Union's executive committee, said in televised remarks.

Russian Premier League club Krasnodar pledged to do everything to terminate Mamaev's contract, while Zenit said Kokorin's role in the incident was "disgusting."

"We are currently looking into how to terminate a contract with the player," FC Krasnodar said.

The club said Mamaev, 30, would have to pay "the largest possible fine" and would be barred from training with the first team for the time being.

"What we saw in the video is outrageous," it added.

FC Zenit said Kokorin, 27, would be disciplined pending the outcome of the police investigation.

"Zenit management and fans feel nothing but disappointment that one of the country's most talented footballers behaved in a disgusting manner," the club said.

Russian President Vladimir Putin's spokesman Dmitry Peskov said the Kremlin - "just like the whole country" - was aware of the incident and described the video as "rather unpleasant".

"This is racism against which FIFA wages an uncompromising fight," he said in televised remarks.

After the assault Pak and the other official, Sergei Gaisin, sought medical assistance before reporting the incident to the police.

It is not the first time the players' behaviour has raised eyebrows.

Russia's Football Union suspended the pair in July 2016 after a video emerged from a Monte Carlo nightclub where Mamaev and Kokorin allegedly spent $296,000 (258,000 euros) on a champagne-fuelled party following Euro 2016, where Russia flopped.

Kokorin, who sat out this year's World Cup with a knee injury, later apologised for his behaviour and was welcomed back into the national team.

Mamaev last played for the national side at Euro 2016, when they finished bottom of their group.

Just when Russian football slow being back to shape and this happens.