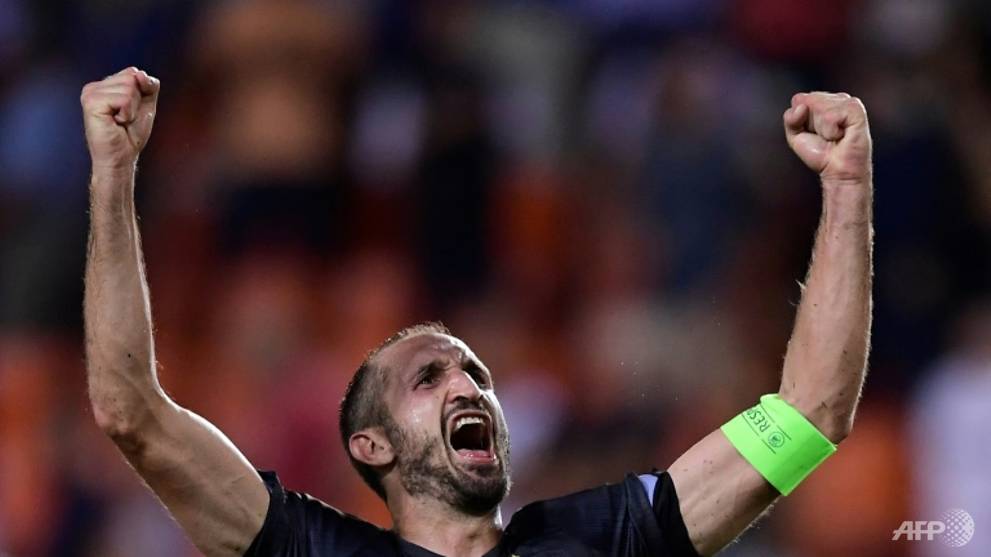 'Being able to play football is not enough': Chiellini urges players to study

"Studying helped relieve some of the pressure in the world of football," said Juventus and Italy defender Giorgio Chiellini AFP/JAVIER SORIANO

MILAN: Italy and Juventus defender Giorgio Chiellini urged players to think more about their careers after football on Wednesday (Oct 17) as he helped launch an education campaign led by global players' union FIFPro.

Chiellini, 34, studied for a degree in economics and a Masters in business administration at Turin University at the same time as winning seven straight Serie A titles with Juventus from 2012.

"Studying helped me relieve some of the pressure in the world of football, and kept my brain sharp," said the Juventus captain.

But only 13 per cent of footballers have a higher education compared to 53 per cent of men in Europe, says FIFPro.

"As a footballer, at 20 years old you feel indestructible and able to do anything in football," said Chiellini.

"But at 35 your career is more or less finished. You then have the rest of your life in front of you, and just being able to play football is not enough.

"Only a few players manage to find a job in football. There's also the risk of depression, and there are many former players with financial problems because they have not thought about what they are going to do, they have not opened their minds by studying."

The towering defender from Pisa started his career at Tuscany club Livorno before joining Roma, with a season spent on loan at Fiorentina before signing for Juventus in 2005.

"As a footballer, you need to start thinking about life after football at the beginning of your career, not at the end," added Chiellini who has also played 99 times for Italy.

"If you are not sharp in matches you can't make the quick decisions that you need to reach the top level in football."

As part of the 'Mind the Gap' campaign, player development managers (PDMs) will be appointed at several national player associations to help footballers prepare for life after retirement.

"The statistics show each year professional footballers are not as prepared as other workers to enter the employment market outside football," FIFPro secretary general Theo van Seggelen said.

"With this campaign, we are encouraging players and player associations to work together to correct this."