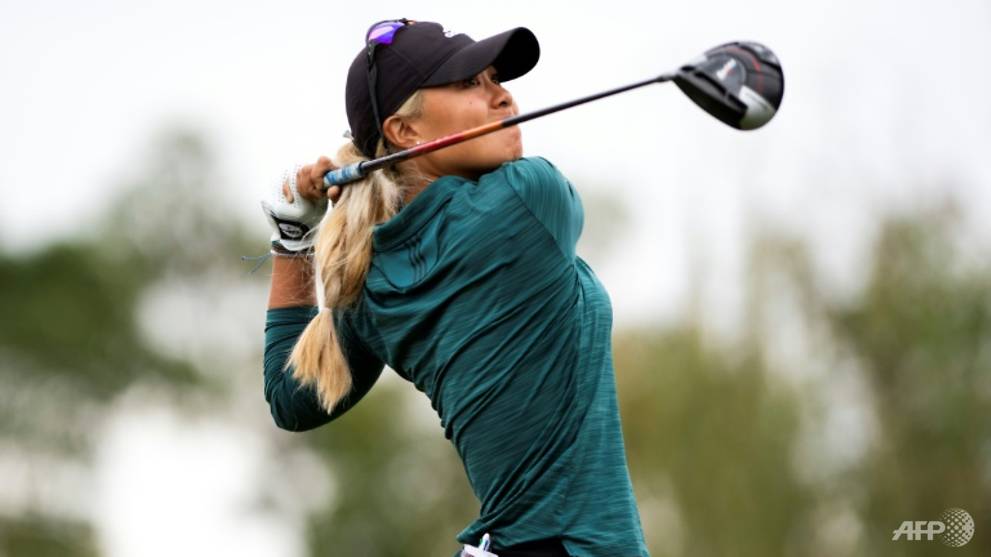 Danielle Kang, who won the inaugural Buick LPGA Shanghai on Sunday, said she has been suggering with anxiety. (AFP/Johannes EISELE)

SHANGHAI: Danielle Kang said she had a "temper tantrum" and was given a stiff talking to from her caddie on her way to victory in the inaugural US$2.1 million Buick LPGA Shanghai on Sunday (Oct 21).

The American also revealed the crippling anxiety she has battled in recent months, after she saw off a pack of rivals to win by two shots on a nerve-jangling final day.

Kang, who turned 26 on Saturday, carded a final-round 69 for a total 13-under-par 275 at a breezy and overcast Qizhong Garden Golf Club, where seven players tied for second.

Kang, ranked 29th in the world, adds Shanghai to the Women's PGA Championship - a major - she won last year.

Afterwards she revealed the mental anguish she has suffered and credited her caddie with pulling her into line for the run-in to the finish.

"After nine holes I had a temper tantrum," said Kang, who went on to drain four birdies in her last nine holes.

"He told me to go off to the side and we did. Hit the bag, do whatever you need to do to let your anger out and start a new nine.

Kang appeared to show no nerves as the tournament reached its thrilling conclusion, but said she had been fighting her demons.

"I've been through so much just mental struggle that it's just been emotionally draining all year," said Kang, who started playing golf at 12 but once had designs on being an actress.

"I've had just some anxiety problems for months and months.

"I'm just finally happy and just working on my game properly. It's been a lot."

Former world number one Lydia Ko of New Zealand was chief among the seven players tied in second, two shots off.

The 21-year-old started the day in tied 11th but burst into the reckoning with a sparkling final-round six-under-par 66.

There was a shock challenge from the 17-year-old Chinese Liu Wenbo, who only turned professional a few weeks ago and came to Shanghai ranked outside the top 500.

Liu was briefly in the co-lead, totting up four birdies in the front nine before dropping a shot on the par-four 15th hole.

The others in second on 11 under were the Americans Marina Alex, Annie Park and Brittany Altomare, together with Thailand's Ariya Jutanugarn and Kim Sei-young of South Korea.

It was a disappointing conclusion for Kim, who had shared the overnight lead with Spain's Carlota Ciganda and topped the leaderboard after round two.

Ciganda fared even worse, falling to a share of ninth place after carding a one-over-par 73.