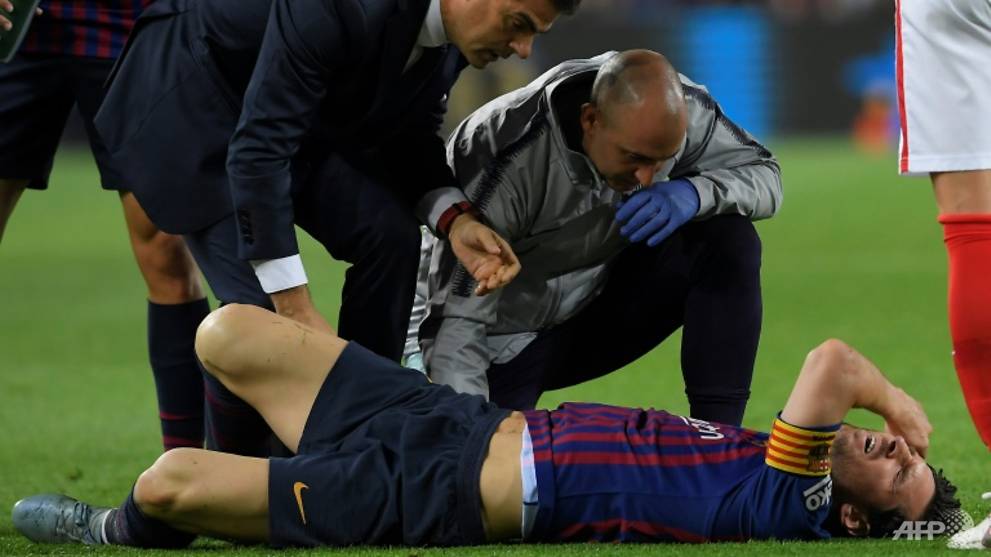 Lionel Messi is expected to be out for three weeks. AFP/LLUIS GENE

BARCELONA: Ernesto Valverde has challenged Barcelona to miss the injured Lionel Messi while they are winning without him.

Barca face Inter Milan on Wednesday (Oct 24) without their star striker, who is expected to be out for three weeks after fracturing his arm against Sevilla on Saturday.

Messi's absence comes at a bad time, given his team face Inter in the Champions League before the first 'Clasico' of the season against Real Madrid on Sunday.

"It is clear it will affect us a lot," Barcelona coach Valverde said on Tuesday. "But at the same time it is a chance to prove ourselves without him.

"We have important matches and a lot of motivation going into them. It is a period for us without Messi and we want to miss him while we´re winning."

Barca have been accused of 'Messidependencia', an over-reliance on the Argentinian, who inspired them to a 4-2 victory over Tottenham in their last Champions League outing. Barcelona sit level with Inter on six points in Group B.

"I don´t really give any thought to 'Messidepenencia'," Valverde said. "If Messi plays, it is obvious he will influence the style of the team. We depend on Messi, like we do other players, but Messi is the best.

"He is the best we've seen and now among all of us we have to make his absence less noticeable because we don't have his genius."

With Messi out, Valverde could bring in Ousmane Dembele at the Camp Nou, the 21-year-old who enjoyed a bright start to the season but has lost his place in recent weeks.

Dembele joined Barcelona from Borussia Dortmund for 105 million euros last year but his first campaign was blighted by injury while doubts remain about the Frenchman's habit for losing possession.

"Anyone can lose the ball, the problem is the reaction you have afterwards," Valverde said.

Barcelona appear to have turned a corner, however, after backing up their sensational win over Spurs with a draw away at Valencia and victory at home to Sevilla.

A positive result against Inter would set them up nicely for Sunday's clash against Madrid, whose poor form has put the future of coach Julen Lopetegui in doubt.

"I have a great relationship with him," said Jordi Alba, Barca's left-back, who played under Lopetegui for Spain.

"He showed a lot of faith in me and I have a lot of respect for him. I wish him well and hope he continues longer because he deserves it."

Luis Suarez could sit out the game against Inter. Suarez missed training on Tuesday due to personal reasons.