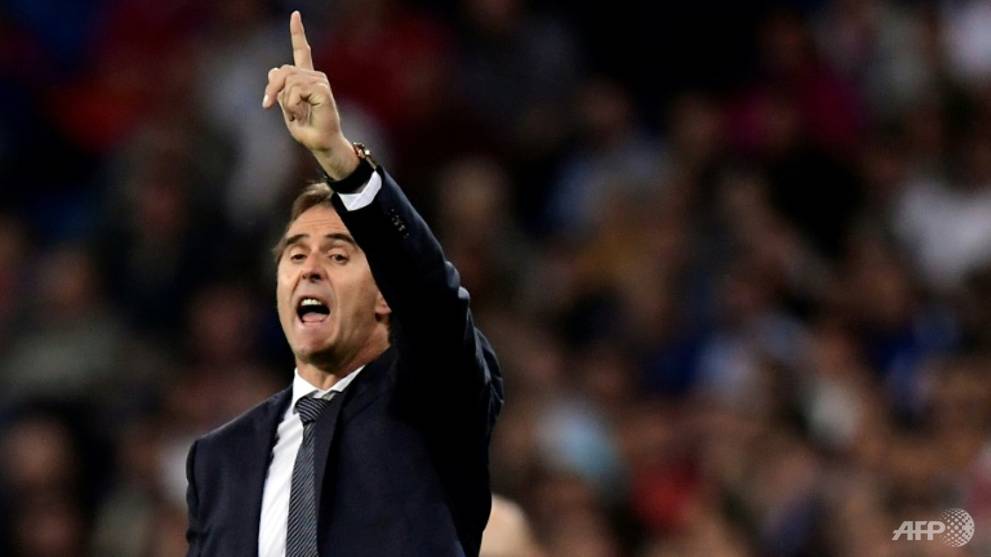 MADRID: Julen Lopetegui grasped at the hope it could prove a turning point but Real Madrid's 2-1 win over Viktoria Plzen in the Champions League is unlikely to guarantee his survival.

Madrid ended their run of five games without a victory, and three without avoiding defeat, while they scored twice in a match for the first time in over a month.

But away from streaks halted and a certain sense of pride restored, beating Plzen on Tuesday (Oct 23) was never likely to save the coach, still less given the kind of win that came at the end of 12 nervy minutes, with Madrid hanging on for the whistle.

The fans whistled too at full-time, disgruntled and unimpressed. Karim Benzema, the team's best performer by a distance, and Marcelo, had put them two up before the hour and had one or two of a handful of chances gone in, a more emphatic score might have lifted the mood.

As it was, Plzen's openings were even clearer and the feeling afterwards at the Santiago Bernabeu was the European champions had been fortunate. Barcelona will not be so generous on Sunday.

Lopetegui focused on the result.

"The important thing was to win this game, the players really needed it, and so did their coach," he said. "For me, it could be a turning point. We created lots of very clear chances."

Elsewhere in the stadium, however, the suspect quality of the performance could not be ignored. "We have to be honest," said Casemiro. "We are not playing well but we have to trust these players and the coach. We are not in a good run but we have to work and overcome this situation."

Even Lopetegui's body language was more a picture of agitation than satisfaction. He had winced and grimaced his way through the second half, and cast a downbeat figure in his post-match press conference.

"Have you studied psychology?" he replied to a journalist making the point. "I am feeling fine, I just don?t tend to smile very much generally."

At the very least, it appears Lopetegui will remain in charge for the Clasico this weekend. "Yes, yes, absolutely - as normal," club director Emilio Butrageuno said on Tuesday night.

A poll on Marca's website on Wednesday asked whether he should. More than 100,000 had voted, with 55 per cent responding yes, 45 per cent no.

The margins are small and it may be that club president Florentino Perez has already made up his mind, regardless of what happens at Camp Nou.

Defeat could serve as confirmation that change is required, with a series of kinder fixtures to come for a replacement.

Draw, or even win, and sacking Lopetegui would be harder to justify. After all, Madrid could be a point behind Barcelona on Sunday night.

On the pitch, there was enough in Madrid's lively start against Plzen to suggest they are still behind their coach but it was clear too the uncertainty has been absorbed.

Their confidence quickly dissipated under the slightest hint of pressure. Defensively, they were a mess.

"It's difficult for everyone," Benzema admitted, while defender Marcelo, taking a swipe at the media, added: "It's hard when you do not win.

"But all journalists try to hurt the players, out of envy, because they don't know how to play football."

Marcelo took a knock late on but suggested it was nothing serious. "It was a hard blow," he said. "But I'm fine now." Lopetegui's recovery will not be so easy.