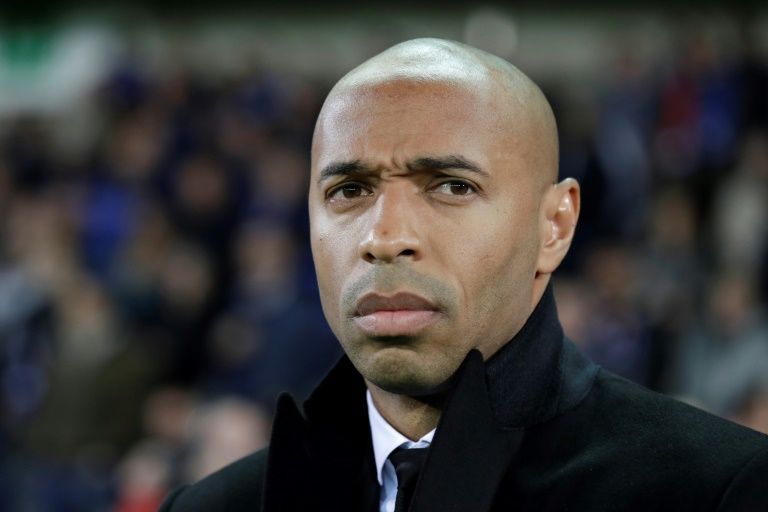 An injury-hit Monaco failed to give Thierry Henry his first win as a head coach with a 1-1 Champions League draw at Club Brugge on Wednesday.

Moussa Sylla raised hopes of Monaco ending an 11-match winless streak by opening the scoring just after the half-hour mark at the Jan Breydel Stadium, but Wesley struck for the Belgian champions to secure a point.

"We are a little less negative than at Strasbourg," said Henry, after a defeat by Strasbourg in his coaching bow on Saturday. "But a draw is a draw, it's not a victory."

The principality club have now also gone 11 Champions League games without a victory since their thrilling 6-3 aggregate triumph over Borussia Dortmund in the 2016-17 quarter-finals.

Henry, who took over from the sacked Leonardo Jardim earlier this month, saw his young side put in a spirited display despite being depleted by a raft of injuries, although the result leaves both sides facing elimination from Group A.

"It's not easy to get points away from home, but we're not going to get carried away," added the 41-year-old former Arsenal star.

"They had more of the ball than we did but we were pretty solid."

Borussia Dortmund and Atletico Madrid lead the way, five points clear of Monaco and Brugge, ahead of their meeting at Signal Iduna Park later on Wednesday.

"We deserved to win, we were the better team on the pitch and we created a lot of opportunities," bemoaned Brugge coach Ivan Leko.

"On one hand I'm pleased with what my players showed, on the other I'm disappointed not to win."

Monaco will now hope it is a case of third time lucky under Henry when they host Dijon on Saturday, looking to drag themselves out of the Ligue 1 relegation zone.

Henry was forced to hand a full debut to 20-year-old fourth-choice goalkeeper Loic Badiashile in West Flanders, with Danijel Subasic and Diego Benaglio out injured and Seydou Sy, who made a dreadful error at Strasbourg, not registered to play in the Champions League.

Nothing was going right for Monaco's new coach, as after Radamel Falcao had hobbled off injured on Saturday, Henry was left without a senior striker when Stevan Jovetic had to be replaced by teenager Sofiane Diop in only the 12th minute.

But his fellow 18-year-old Sylla put the visitors ahead in the 32nd minute, darting onto Aleksandr Golovin's through ball and sliding home his maiden Champions League goal.

Sylla should have doubled the lead before half-time as he raced clear of home goalkeeper Karlo Letica, only to roll the ball wide of an empty net.

He was made to pay just seconds later, as Brazilian forward Wesley saw his header take a big deflection off Monaco centre-back Kamil Glik and spin past the despairing dive of Badiashile.

Brugge continued to create chances in the second half, but after a flowing move which sliced Monaco open, captain Ruud Vormer hacked his strike well over the crossbar.

After a nervous moment when Badiashile lost possession outside his own area, Monaco went straight up the other end and nearly retook the lead when Golovin's drive was beaten away by Letica.

Henry, who was assistant coach to Roberto Martinez for Belgium during their run to the World Cup semi-finals, replaced substitute Diop with midfielder Jean-Eudes Aholou in an attempt to seal a point, but they needed a massive slice of luck to escape with a draw.

With Martinez watching on in the stands, 18-year-old Belgian Lois Openda wasted a glorious opportunity deep into added time, heading wide from barely two yards out with an open goal to aim at.