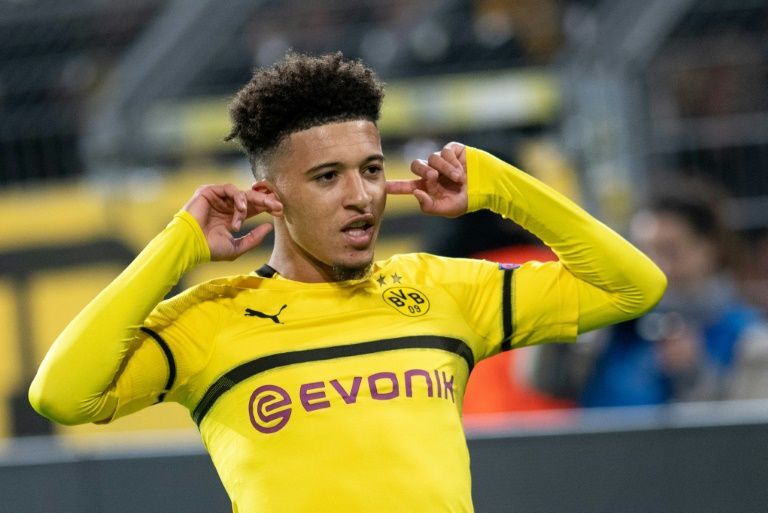 Buoyant Dortmund host Hertha, Bayern out to build on mini-recovery

Jadon Sancho will be looking to maintain his perfect record for rampant Borussia Dortmund on Saturday when the in-form Bundesliga leaders host top-six rivals Hertha Berlin.

After Wednesday’s 4-0 thrashing of Atletico Madrid, Dortmund have now won six games in a row, and Sancho has chalked up either a goal or an assist in each of those wins.

Dortmund are three points clear at the top of the league, and four points ahead of fourth-placed Bayern Munich.

The champions are still searching for their best form, with Mats Hummels complaining of “fundamental problems” in midweek.

Elsewhere, Borussia Moenchengladbach striker Alassane Plea will be seeking to write himself into the record books against Freiburg on Friday, while Schalke and Bayer Leverkusen remain mired in the early-season blues.

Here are five things to look out for in the Bundesliga this weekend:

League leaders Dortmund are in such superb shape that some are already casting them as title favourites ahead of Saturday’s tough clash with Hertha Berlin.

Lucien Favre’s team have drawn comparisons with the Jurgen Klopp-era Dortmund, and it is easy to see why after six thumping wins in a row.

Dortmund have scored 26 goals in their last six games, with super-subs Sancho and Paco Alcacer doing much of the damage.

"Lucien Favre gives you the feeling that you belong, even when you don’t make the team," explained midfielder Thomas Delaney this week. “He really gets the right balance.”

Both Alcacer and Delaney are doubts for Saturday’s game.

Bayern far from their best

Mats Hummels has said that Bayern Munich still have “fundamental” problems to deal with, as the champions look to continue their mini-recovery away to Mainz on Saturday.

Bayern had failed to win four games in a row before last weekend, and despite victories over Wolfsburg and AEK Athens since then, Hummels insisted they are not out of the woods yet.

"We keep giving the ball away too easily in defence or playing unnecessary long balls,” said Hummels.

Alassane Plea could equal a Bundesliga record if he gets on the scoresheet during Borussia Moenchengladbach’s trip to Freiburg.

With Bayern languishing in fourth, high-flying Gladbach are the ones keeping the heat on Dortmund in second, and much of that is down to the French striker.

Plea has scored eight goals in nine games this season, and could become only the third player to score a goal in each of his first five Bundesliga away games if he scores on Friday, following Steffen Baumgart and Serge Gnabry.

"I’ve had a very good start,” Plea told Bild. “As a striker, it is always good to be scoring goals.”

Schalke out to end drought

Schalke are out to end their crippling goal drought away to big-hitters RB Leipzig on Sunday.

Domenico Tedesco’s side have scored just five goals in eight league games this season, and failed to take any of their 17 chances in a 0-0 draw with Galatasaray on Wednesday.

Their poor conversion rate sees last year’s runners-up stuck in the relegation play-off place, just a point off the bottom of the table.

“We need a result if we are going to start climbing up the table,” said Tedesco on Wednesday. “This phase can’t go on forever.”

Herrlich on the brink

Bayer Leverkusen are another big Bundesliga club in trouble, as coach Heiko Herrlich fights to save his job.

Leverkusen have only two wins from their first eight games, and rumours that Herrlich is heading for the chop were exacerbated this week when Kicker reported that the club had been in contact with former RB Leipzig coach Ralph Hasenhuettl.

Herrlich and his team face a tough task on Sunday, coming off the back of a Europa League tie to face a confident Werder Bremen side who are punching above their weight in third place.