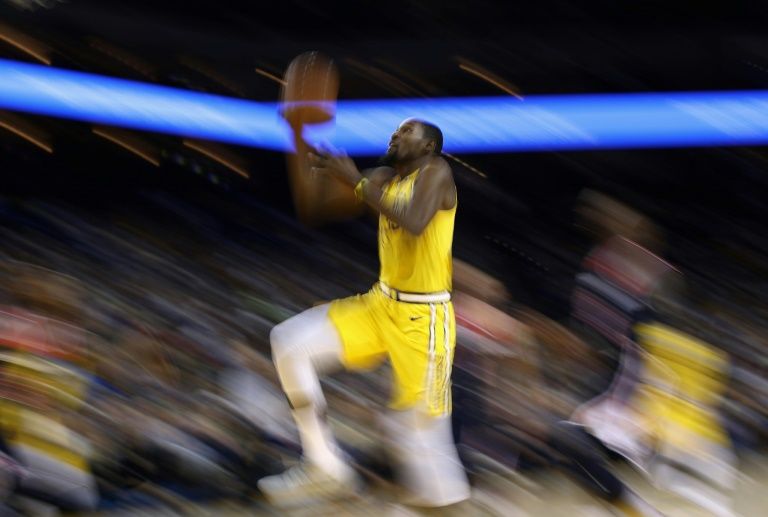 "I just tried to be aggressive and score," Durant said. "I thought our third quarter was pretty bad. I tried to give us a spark by scoring in the fourth and it got us going."

Durant said being the defending NBA champions means every other team is trying to knock you off that lofty perch.

"They challenged us tonight. It's better to be the hunted and get everybody's best game. It brings out the best in us," Durant said.

He finished 17 of 24 from the floor, including five of nine from 3-point range, and seized nine rebounds.

Durant said his pre-game preparation was just the way he likes it.

"I want to shoot good shots and shoot the shots I practice every day and shoot them with confidence. I want to prepare right before the game so I can come out here and be myself when the lights turn on."

Durant could become a free agent at the end of the season and the Knicks are considered to be one of the teams interested in wooing him.

He received a loud ovation when he was introduced and there's a billboard on a building near the famed arena urging him to sign with the Knicks.

Stephen Curry added 29 points and sank six 3-pointers, giving him at least five from beyond the arc in every game this season.

Curry delivered his career best performance of 54 points at Madison Square Garden in 2013.

Tim Hardaway scored 24 points for the Knicks, who have dropped five in a row after a season-opening win over Atlanta.

Frank Ntilikina scored 17 points and Trey Burke had 15 for the Knicks, who jumped out to a 16-10 lead.