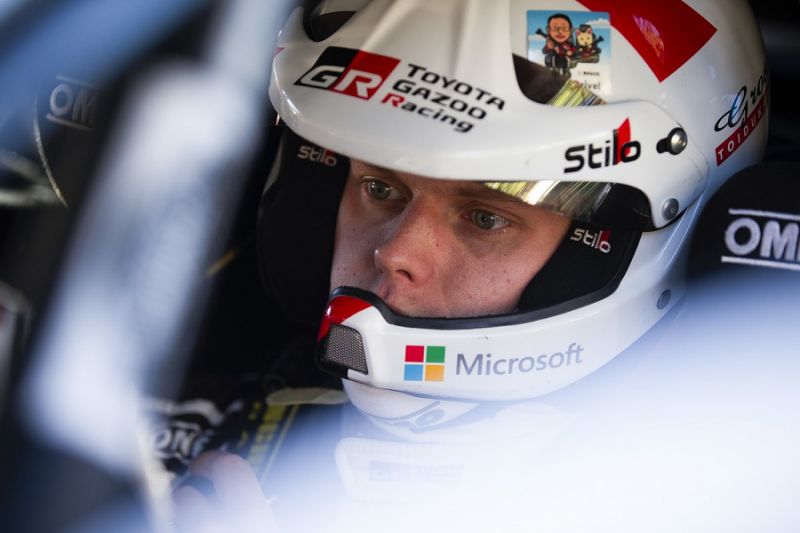 Toyota driver Ott Tanak has explained the cause of the puncture that cost him his Rally Spain lead and further hurt his World Rally Championship title chances.

The Estonian was 32.9 seconds ahead of the field going into the final morning test, but a front-left puncture forced him to stop and change the tyre on his Yaris WRC in El Montmell.

He dropped to ninth position - a minute down on new leader Dani Sordo.

Had Tanak maintained his advantage and won, he would have closed on points leader Thierry Neuville and second place Sebastien Ogier - having also retired from the lead of Wales Rally GB last time out.

The puncture appears to have been caused after he cut a corner. The inside of the Michelin full wet was damaged on the sharp edge of a kerb as the car returned to the road.

Tanak told Autosport: "[The tyre] went straight down, looks like the edge of the tarmac [caused it] and the tyre is broken from the inside. What can I do? It's happening many times this year - you get used to it, but I'm not happy!

"I thought taking this full wet tyre was a safe gamble this morning, but it looks like the puncture risk was too high."

Asked if he could gamble again through what is forecast to be a damp afternoon loop, Tanak said: "I don't think we can gamble anything. The [full wet and soft] tyres are different but the times are quite similar.

"It's difficult to try to think about making back one minute on tarmac. We can keep going and we can see what happens, but we can't change anything ourselves now."

Toyota team principal Tommi Makinen added that he and his squad had learned a harsh lesson from using the full wet tyre.

"It's a little bit softer construction," he said. "When you are on this compound then I think maybe you have to follow the road and not drop a wheel off the edge.

"The rim was broken first, then the tyre. It's so dramatic again, Ott was so fast.

"For the championship, manufacturers', OK, this is still going OK. But for Ott this is another big disappointment."

"Now we have Jari-Matti," Makinen continued. "He is feeling confident and everybody was happy with the way the car is working today. Let's see what can we do."

Latvala is chasing his first victory of the year, having not won in a Toyota since Sweden last year.

Behind Sordo and Latvala, Elfyn Evans, Sebastien Loeb and Sebastien Ogier are all with a shot at the win as 13.1s covers the top five.