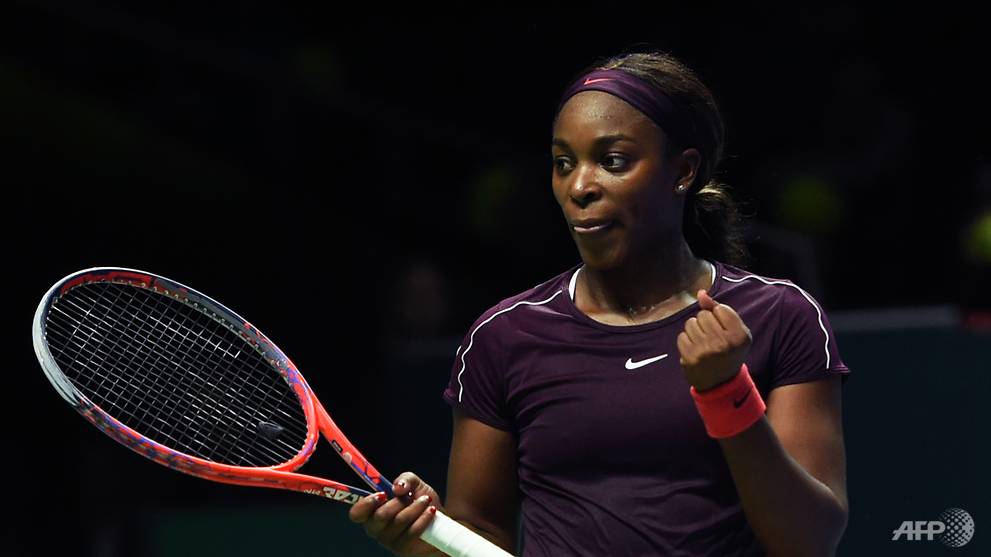 Sloane Stephens of the US celebrates after defeating Czech Republic's Karolina Pliskova during their singles match at the WTA Finals tennis tournament in Singapore on October 27, 2018. / AFP / Roslan RAHMAN

The former US Open champion triumphed on Saturday against an inconsistent Pliskova 0-6, 6-4, 6-1 in one hour and 55 minutes in Singapore.

A stunned Stephens lost the opening eight games before turning things around to win 12 of the next 15.

The hard-hitting Pliskova started red hot in what loomed as a one-sided contest before Stephens fought back with relentless hustle as the Czech went off the boil.

"I just made a couple extra plays on the ball. Tried something a little different. When I did that, it worked."

Pliskova said she produced her "best set" of the year before the dramatic change.

"I don't think I did that many things wrong in the second set," she said. "Obviously, I lost a little bit energy in the third set."

It was an unexpected result after Pliskova's early domination through power and precision to blitz through the first set in 31 minutes.

She pinpointed the lines to totally rattle a flustered Stephens, who uncharacteristically made a slew of errors.

After surviving an early break point, the one-way traffic continued in the second set with Pliskova breaking in the second game against a dejected Stephens.

The humiliation ended for Stephens when she broke Pliskova's previously impregnable serve in the third game and then started to find her range.

Pliskova's first serve deserted her as a composed Stephens forced a decider and her momentum continued by capturing a break to open the third set.

Stephens rolled through against a slumping Pliskova to complete a monumental turnaround, as the former world number one fell in the semi-finals for the second straight year.

Svitolina outlasted the world number nine 7-5, 6-7 (5/7), 6-4 in two hours and 39 minutes to continue her bid to make amends for a lacklustre early exit last year.

Her defensive prowess wore down Bertens, who blasted 41 winners but made 63 unforced errors.

It ended a fairy tale run for Bertens, who only qualified days before the tournament when world number one Simona Halep withdrew from injury.

"I think physically I was a little bit stronger... pushed myself a little bit more maybe mentally," Svitolina told reporters. "I think only a few points decided the third set because we both were playing good tennis."

Bertens said Svitolina's defensive skills forced her into playing ultra-aggressive. "I knew that I had to play that kind of game, but that comes also with a lot of mistakes," she said. "In the end she was just a more stable player."

The world number seven drew first blood when Bertens double-faulted on set point, as the Dutchwoman threw her racquet in frustration after a first set riddled with 21 unforced errors.

Bertens regrouped and was on the brink of levelling it up at 40-0 in the 10th game but cracked under the pressure.

The 26-year-old recovered in a tense tiebreak to force a decider and the twists continued in a pulsating third set.

Svitolina was unable to consolidate the break in a marathon 13-minute second game but hit back immediately against Bertens' erratic serve, becoming the first ever Ukrainian to qualify for the decider.