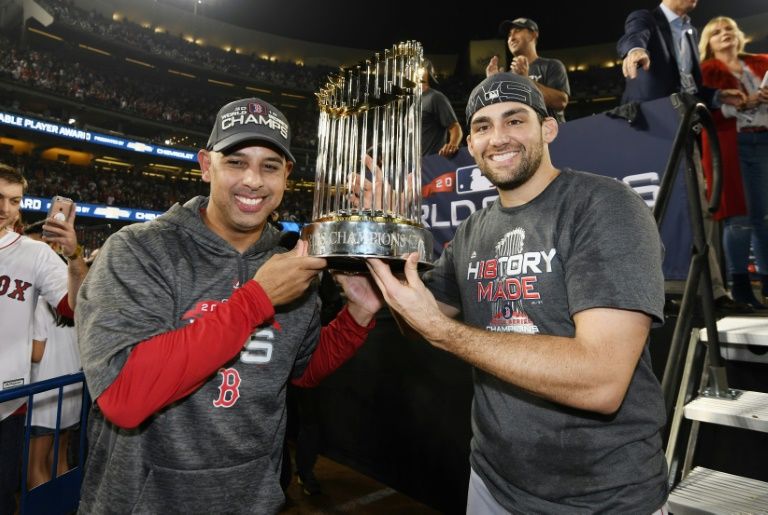 1-to-1 hair care consultation: Sign up here
Enjoy the best prices with services from YIJINTECH Aircon!

Steve Pearce travelled a long road to end up living a childhood dream as the World Series Most Valuable Player for his beloved Boston Red Sox.

The 35-year-old slugger grew up in Florida in a family with Massachusetts roots and a passion for the Red Sox.

"This has been a lifelong journey," Pearce said. "And to be here right now is a dream come true."

On a talent-laden Red Sox team that won 108 regular season games and included American League Most Valuable Player candidate J.D. Martinez, it was Pearce who emerged as the unlikely home run hero of the World Series.

He clubbed two homers in Sunday's series-clinching 5-1 win over the Dodgers, a day after fueling Boston's game four victory with a homer and a clutch three-run double.

Pearce, whose career has been slowed by injury, arrived in Boston in June, traded from the Toronto Blue Jays on June 28.

The Red Sox are his seventh team in 11 seasons but the player who personifies the term "journeyman" has shined in the post-season, finishing the World Series with eight runs batted in, the second-most by a Red Sox player in a World Series behind only Dwight Evans -- who plated nine in the 1986 Fall Classic.

"Best feeling in my life," Pearce said of celebrating with his teammates on the Dodger Stadium field.

"This is what you grow up wishing that you could be a part of, something like this. With that special group of guys out there, to celebrate with them, that was awesome."

Pearce is the first position player to win World Series MVP with 50 or fewer regular season games for the winning team in his career.

He said he felt at home with the Red Sox as soon as he arrived, and not just because he had backed them as a boy.

"You see how much fun they have, playing against them all the time and how good they are. And to come over and be a part of that team, the chemistry that they had, they welcomed me with open arms from day one," he said.

"And they made it very easy for me to play my game of baseball, and I couldn't be any happier."

Red Sox manager Alex Cora said Pearce had added value not only on the field but also in the clubhouse.

"He's been a great teammate. Veteran guy. He's been through a lot. He's ground it out," Cora said. "Little by little his role got bigger.

"Seems like we were facing a lot of lefties in the post-season. He kept putting up good at-bats. H played great defensively for us, too, and that was a plus."

With his unlikely World Series MVP, Pearce put his name alongside a couple of greats, joining Babe Ruth and Ted Kluszewski as the only players 35 or over with multiple-homer games in the World Series.

"That's great company," he said. "Those guys were the best. And if my name gets to sit right next to theirs, I know I've accomplished something."