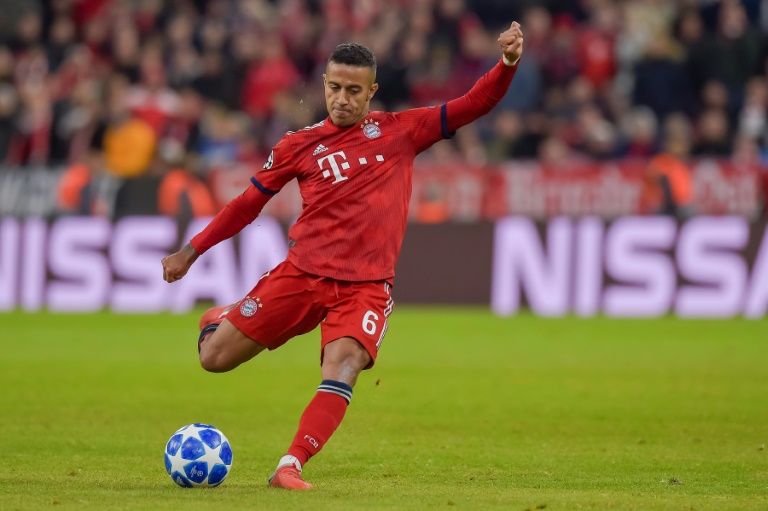 Bayern Munich will discover on Wednesday the extent of Thiago Alcantara's ankle injury after the Spain midfielder had to be helped off in their narrow German Cup win.

Despite starting with 11 internationals, Bayern scraped past fourth-tier Roedinghausen 2-1 in Tuesday's second round tie as Thiago was carried off late on.

"I hope it's nothing bad, but it didn't look good and he was in a lot of pain," said Bayern coach Niko Kovac.

"We must wait on the exact diagnosis, but it looks like he has an ankle injury."

Thiago is one of the few Bayern stars to hit good form recently.

He scored the winning goal in Saturday's 2-1 win at Mainz and Bayern, currently second in the Bundesliga, can ill-afford to lose him for the clash at league leaders Borussia Dortmund in ten days time.

"It doesn't look good. It would be bad if he has to drop out as he really matters to the team," admitted Bayern's sports director Hasan Salihamidzic.

Bayern have won their last four games but have looked jaded in recent weeks and laboured in Osnabrueck against Roedinghausen's part-timers.

Bayern were 2-0 up inside 13 minutes as Sandro Wagner scored an early goal and Thomas Mueller converted a penalty, but lost their way after Renato Sanches fired a spot-kick off the woodwork after 23 minutes.

"We are through, but as we all saw, every (Bayern) player has to give it some thought - this isn't just our right (to reach the third round)," fumed Mueller.

Roedinghausen pulled a goal back just after the break and had chances to equalise against the reigning Bundesliga champions.

"We're a round further in the competition, which is always what you want and we played well up until the second penalty," said Kovac.

"After we missed that, the wind went out of our sails and we didn't play as well as I had imagined we would."

Bayern host mid-table Freiburg at the Allianz Arena on Saturday in the Bundesliga, then AEK Athens in the Champions League next Wednesday, having already beaten the reigning Greek champions 2-0 in Athens a fortnight ago, before the crunch showdown on November 10 at Dortmund.