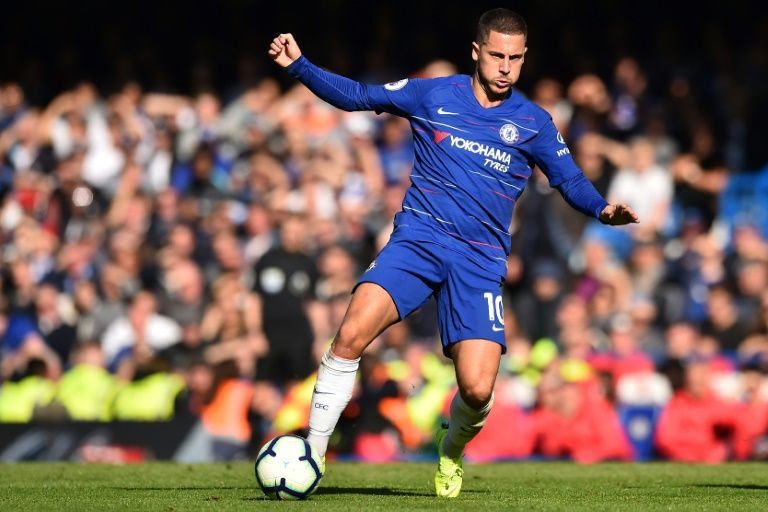 Sarri expects fit-again Hazard to play a role against Palace

Maurizio Sarri expects Eden Hazard to feature against Crystal Palace on Sunday after the Chelsea star recovered from the back injury that sidelined him for two weeks.

Hazard had missed Chelsea's last three games but he was fit enough to train with his team-mates in the latter part of this week.

Blues manager Sarri is confident Hazard will be involved when Palace visit Stamford Bridge, but he is still waiting to decide whether the Belgian playmaker will start or come off the bench.

"Yesterday Eden had a large part of training with the team," Sarri told reporters on Friday.

"Maybe he will not be ready to play for 90 minutes at the moment because it was his first training in the last two weeks.

Whether Hazard will start on Sunday remains to be seen as Sarri added: "I don't know, I want to speak with him first."

Hazard's presence would be a major boost for Chelsea after his blistering start to the season.

The 27-year-old has scored eight times for Chelsea, with his superb solo strike in a League Cup win at Liverpool ranking as a contender for goal of the season.

Chelsea sit in third place in the Premier League, two points behind leaders Manchester City, after a fine start to the campaign.

Ahead of the Palace clash, Sarri has taken the intriguing decision to make Gary Cahill his official club captain, even though the centre-back has barely featured this term.

Cahill had previously admitted he could have to leave Chelsea for regular first-team football, but Sarri has endorsed his Blues future by reappointing him as skipper after canvassing his squad's opinion.

"The captain is Cahill, and if he's not on the pitch it's (Cesar) Azpilicueta," Sarri said.

"Our captain is Cahill because Cahill was the captain last season and I have spoken with his mates, and everybody told me that he was really a very good captain."

Asked whether appointing Cahill as captain means he will definitely stay at Chelsea at least until the end of the season, Sarri said: "I don't know. It depends on him, I think.

"He played very often in the last seven, eight matches. It depends on him, on the club I think, but for me Cahill is very important on the pitch but also off the pitch."