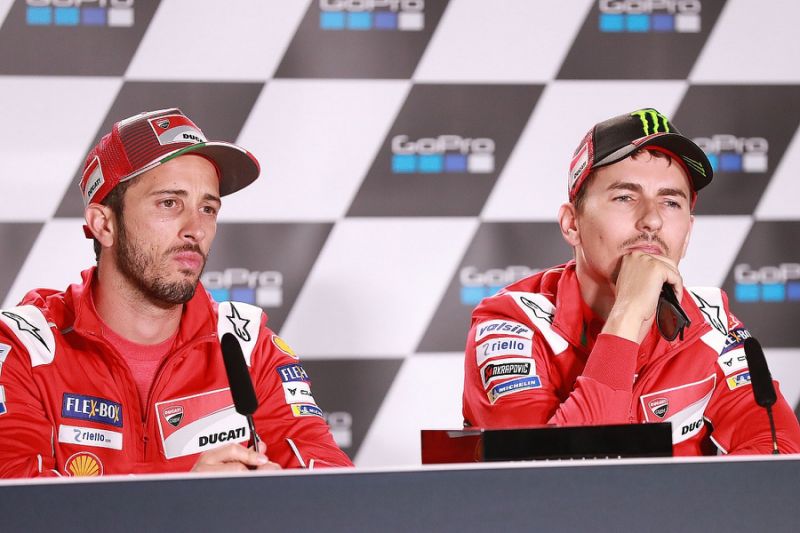 Jorge Lorenzo has gone on a social media onslaught against Ducati MotoGP team-mate Andrea Dovizioso over remarks made about Lorenzo's withdrawal from the Malaysian Grand Prix.

The row was sparked by Dovizioso's comments to Sky Italia after qualifying at Sepang on Saturday, as he was asked what he thought of Lorenzo having to pull out of the weekend with injury.

"I don't know the details, I don't want to get into this, it's a bit of a strange situation," said Dovizioso.

"It happens often in Ducati or to certain riders, but I don't understand the details and I don't want to get into it and give my opinion."

When it was put to him he was offering 'cryptic words', Dovizioso replied: "I leave things there, it's not my problem."

Dovizioso's comments prompted a series of irate posts from Lorenzo on Twitter, with his first reaction being "Thank you very much @AndreaDovizioso! You are a real gentleman!".

Lorenzo lashes out at 'envious' Dovizioso

In his next post, he went on to call Dovizioso "an exemplary team-mate", adding: "You applaud him under the podium when he wins and then... (That's right, he does not give his opinion, it's not his problem)."

After that, Lorenzo labelled Dovizioso "envious" and dismissed him as "a world champion... in 125cc."

The Malaysian GP marks the fourth MotoGP race weekend in a row Lorenzo has been forced to miss since his huge crash in Thailand last month left him with a fractured left wrist.

He had attempted to return at Sepang for what he admitted would be a compromised performance to reacclimatise ahead of the Valencia season finale, but withdrew after Friday practice.