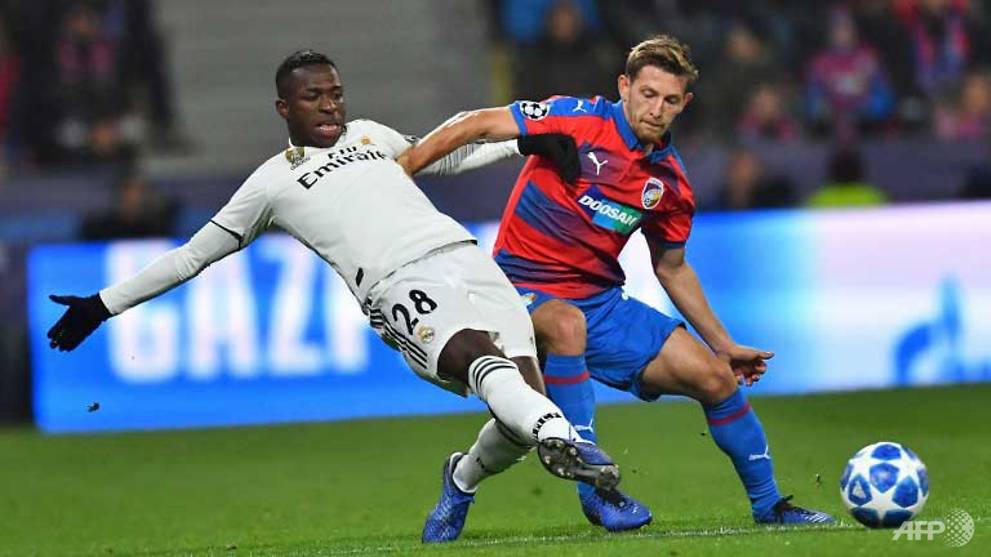 PLZEN, Czech Republic: Karim Benzema's first-half brace propelled Real Madrid to a 5-0 thrashing of Viktoria Plzen in the Champions League on Wednesday (Nov 7), putting the holders one win from the last 16 after a third straight victory under Santiago Solari.

Former Real midfielder Solari took over from the sacked Julen Lopetegui as interim coach on October 29, and has now seen his side score 11 times without reply following wins over Melilla and Real Valladolid.

"I think we played a very nice game today, we scored wonderful goals," Solari told reporters. "A 5-0 win in the Champions League - I can only be happy with that."

The 42-year-old Argentinian dismissed questions about his possible future as Real's head coach.

"I only think about the next game. Football is about the present and it's the next game that matters," he said, with a trip to Celta Vigo on Sunday next up for Real.

Benzema struck first on 21 minutes, weaving his way through the Plzen defence and beating goalkeeper Ales Hruska with a low shot.

Casemiro made it two shortly afterwards by nodding in a Toni Kroos corner, and Benzema headed home himself in the 37th minute after Gareth Bale had found him unmarked just yards out.

Kroos rounded off the scoring in the 68th minute, curling a sumptuous lob over the stranded Hruska following a pass from rising star Vinicius Junior, who came on as a second-half substitute.

The 18-year-old Brazilian, signed from Flamengo for 45 million euros in the close season, made his Champions League debut after scoring his maiden La Liga goal against Valladolid at the weekend.

Real are now level with Roma at the top of Group G on nine points, after the Italians' 2-1 win at CSKA Moscow earlier on Wednesday. CSKA are third with four points, while Plzen sit at the bottom and are out of contention to progress.

Real were without the injured Marcelo and fellow defenders Raphael Varane and Dani Carvajal, who did not travel to Plzen, a western Czech city famous for its lager beer.

Real overcame an early scare when Nacho cleared a low cross against his own crossbar, while Plzen midfielder Roman Prochazka curled a shot just past Thibaut Courtois's goal.

But they were quick to regain their composure and put Plzen on the back foot.

Bale headed wide from close range and then saw his long-range shot kept out by Hruska while the Plzen defence cleared the ball away from Benzema hungry for a rebound.

Benzema then narrowly missed Bale's cross just in front of a gaping goal.

Plzen, the reigning Czech champions, had two attempts on goal from long range in the second half, but Jan Kopic saw his effort stopped by Courtois and Patrik Hrosovsky, who scored for Plzen in their 2-1 loss in Madrid in October, fired wide.

Bale came close to scoring a second in stoppage time but was denied by the woodwork.

In their next Champions League game, Real face Roma in Rome on Nov 27.