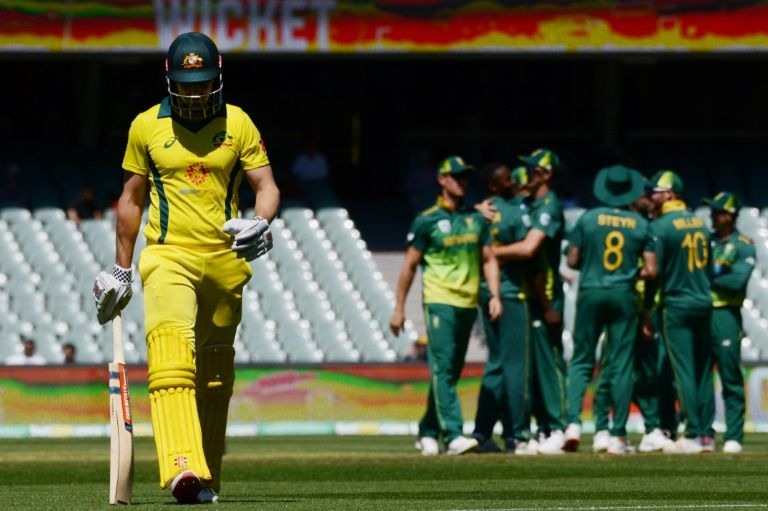 Australia all out for 231 against South Africa

Three players hit 40s but failed to stick around and make big scores as Australia were bowled out for 231 in the second one-day international against South Africa in Adelaide.

The hosts, who were thrashed by six wickets with more than 20 overs to spare in the opening match of the three-game series in Perth, are desperate to snap a record seven-game losing streak.

Adelaide has been a happy hunting ground in the past, with Australia winning their previous four one-dayers at the oval.

In fact, their last win came in Adelaide nine months ago against England, before the reigning world champions were knocked for six by the ball-tampering scandal in South Africa in March.

Their form slump since has been characterised by batting collapses and they again struggled to compile a big total with some tight South African bowling putting them back in the pavilion in 48.3 overs.

Skipper Aaron Finch stressed beforehand the need to go back to basics and build partnerships, and he and Travis Head tried to set the tone after being sent into bat by Faf du Plessis.

Head smashed two fours in his first over but his aggressiveness cost him his wicket, with Lungi Ngidi trapping him lbw for eight as he pushed for a drive.

That brought the experienced Shaun Marsh, who missed the first game for minor surgery on an abscess, to the crease and he quickly got into his groove.

He and Finch knocked up a 50 partnership before Marsh, on 22, got a thick edge off Rabada and wicketkeeper Quinton de Kock easily took the catch.

Finch built a composed 41 before he was deceived by a Pretorius delivery and chopped the ball onto his wicket.

The explosive Chris Lynn looked ominous and was in Twenty20 mode when he smacked 18 off the first four balls from a Rabada over before he pushed his luck too far on the fifth, mistiming a hook to be caught behind.

With wickets falling cheaply as South Africa tightened the screws, Alex Carey worked hard to keep the scoreboard ticking over before becoming Rabada's third victim on 47.