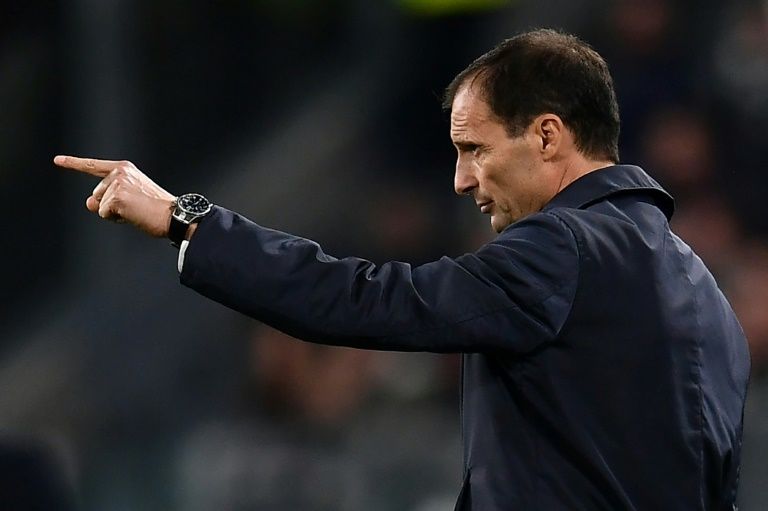 Massimiliano Allegri urged Juventus not to dwell on their slip-up against Manchester United but instead to use the Champions League drama to avoid a repeat against AC Milan in Serie A on Sunday.

Juventus lost to two late goals against the Premier League club for their first defeat of the season, but will be determined to extend their unbeaten run in Serie A as they target an eighth consecutive league title.

The Italian champions have 31 points from 11 games -- six points ahead of Inter Milan and Napoli -- with AC Milan in fourth position, a further four points adrift along with Lazio.

Another banana skin could await at the San Siro against Gennaro Gattuso's Milan who have pulled off some late winners themselves recently, with a 97th-minute goal sealing victory over Udinese last weekend.

"No one expects to win all games, but this kind of defeat, especially from a psychological point of view, can upset us," said Allegri.

"But it will make us smarter and first up we have the match against AC Milan."

"I'm not worried but we just need to be more accurate in front of goal," added the coach after a series of misses on Wednesday following Cristiano Ronaldo's stunning volley that put them in control.

Allegri's side were the only Italian team to lose in European football during the week.

Lazio booked their passage to the knockout rounds of the Europa League with a 2-1 win over Marseille with AC Milan snatching a point at Real Betis.

"Now we've got two and a half hours to fly back and do some work on the plane," said Gattuso.

"Juventus are one of the best sides in Europe, not just in Italy, but we won't sit here crying. We'll face them and play our football."

Both sides have injury problems with Milan midfielder Lucas Biglia out for four months after surgery on a calf muscle tear.

Their top-scorer Gonzalo Higuain went off with a back twinge against Udinese but is expected to return against his parent club after joining Milan on loan from Juve in the close season.

Inter, meanwhile, travel to Atalanta, with Napoli, who are behind Luciano Spalletti's side on goal difference, travelling to Genoa on Saturday.

Both Inter and Napoli scored five goals in their wins last weekend, and will be keen to keep the pressure on Juventus before the international break.

Napoli are still without Simone Verdi, but Dries Mertens -- who scored a hat-trick against Empoli -- has recovered from a shoulder problem picked up against PSG.

Lazio travel to Sassuolo eyeing a move into the top four and the Champions League spots.

City rivals Roma are down in ninth, and want to start to climb the table against Sampdoria after taking just two points from their last three games.

Fiorentina can kick off the weekend action with a win to move up into the European places as they travel to second-from-bottom Frosinone.

Tailenders Chievo host Bologna, who are three points above the drop zone.

Back tje wounded Juventus to win against Milan!