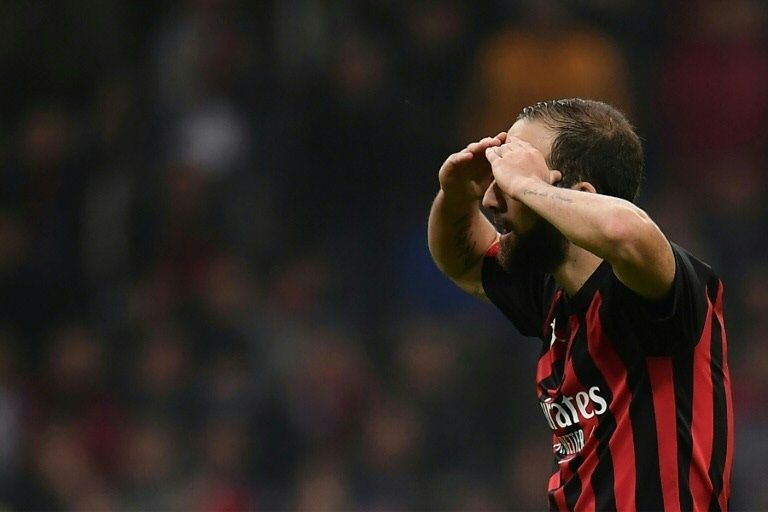 1-to-1 hair care consultation: Sign up here
Experience VR game at 20% off discount

On-loan AC Milan striker Gonzalo Higuain apologised for his meltdown in the 2-0 defeat to his parent club Juventus on Sunday which saw him sent off for screaming at the referee after earlier missing a penalty.

Argentine Higuain had shrugged off a back injury to take on his former teammates after being loaned to AC Milan last summer to make space for the arrival of Portuguese superstar Cristiano Ronaldo.

But tensions boiled over as AC Milan struggled to find a way past the reigning seven-time champions.

Higuain was sent off after 83 minutes, two minutes after Ronaldo, the player who took his place in Turin on an 100-million-euro ($115m) deal, fired in his eighth league goal in 12 matches since arriving from Real Madrid.

Higuain saw red after screaming at referee Paolo Mazzoleni in protest at a yellow card for a foul on Medhi Benatia.

"I know that we are an example for all children, for those who play football, for the people watching, but we are not robots, and we carry things within us," Higuain said after.

"We are human, we feel emotions, the game was not going the right way and it was one of those days.

"I think sometimes the referees should understand the situation," added Higuain, who won two Serie A titles with Juventus after joining from Napoli in 2016.

The 30-year-old was loaned to AC Milan with a 36-million-euro option to buy with defender Leonardo Bonucci moving the other way.

He has scored five goals for Milan but could not get one past his former club, for whom he scored 16 goals in the league last season.

Croatian forward Mario Mandzukic headed in the opener in the eighth minute at the San Siro, before Higuain failed to convert his 40th-minute chance from the spot after a Benatia handball.

Juventus goalkeeper Wojciech Szczesny tipped the ball onto the post.

"Had I scored, the game would have changed," said Higuain.

"Now we have to look ahead, we will have two weeks of rest and then face Lazio for fourth place."

AC Milan's third loss his season saw them drop out of the Champions League places into fifth behind Lazio who moved back into fourth despite a 1-1 draw at Sassuolo.

Coach Gennaro Gattuso conceded his side were no match for Juventus who bounced back from their Champions League defeat to Manchester United to maintain their six-point advantage ahead of ahead of Carlo Ancelotti's Napoli.

Inter Milan drop to third a further three behind after losing 4-1 at Atalanta.

"Juventus have shown they have something more than us," said Gattuso.

"Right now, he (Higuain) feels a huge weight on his shoulders and it shows.

"He missed the penalty against his former team, sometimes the emotion can get to you. He must calm down, apologise and assume his responsibilities.

"He's our most important player and he has to make the difference. He has to be clear headed".