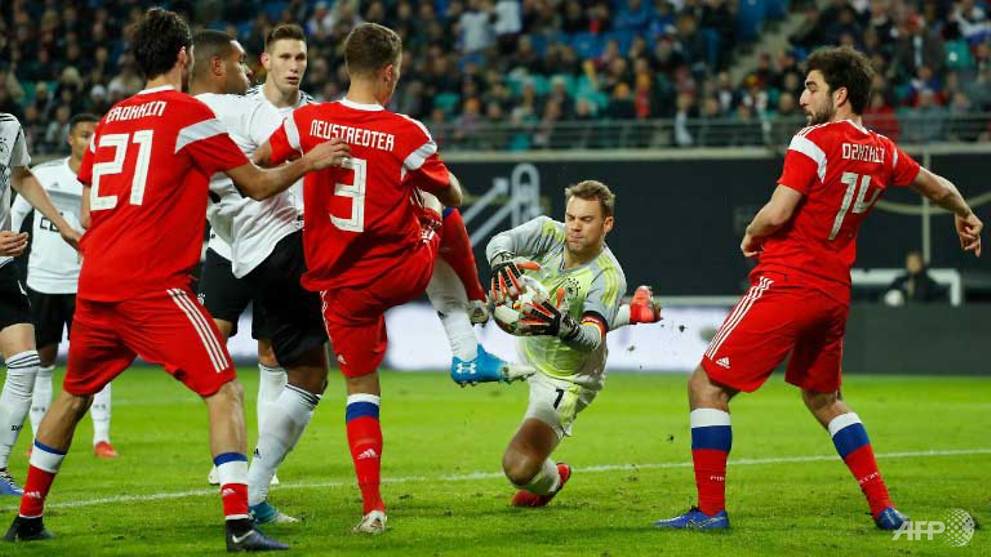 "We can be pleased with that, we were in top form in the first half," said goal-scorer Gnabry.

"We were a bit too passive after the break, but we will take the win.

"It doesn't matter how old this team is, look at someone like Kai (Havertz), he's only 19, but played really well."

This was Germany's biggest victory and most convincing performance of 2018, a year which saw a record six defeats.

After so many lacklustre performances from the Germans in the last 12 months, Loew's spritely side came through thanks to some high-tempo football.

However the victory is no more than a confidence booster for Monday's crunch Nations League match at home to the Netherlands when Loew will recall his senior players.

The Germans, bottom of Group One in League A, are currently two points behind the Dutch, who play leaders France in Rotterdam on Friday.

Loew had talked down the importance of the Nations League and was talking up his rebuilding process in Leipzig in the wake of the woeful World Cup performance.

After crashing out after the group stages in Russia, Loew made good on his promise to give Germany "a new" youthful face, with 19-year-old Kai Havertz partnering Joshua Kimmich in midfield.

Even with 32-year-old Manuel Neuer in goal, this was one of the youngest teams Loew has fielded in his 12-year tenure with an average age of just under 24.

Neuer was the only player from the 2014 World Cup final to start, and the bold line-up paid off against a limited Russian team.

The Germans got off to a bright start and were ahead after eight minutes, when Gnabry's lovely threaded ball was clinically finished by Sane.

Suele, 23, made it 2-0 on 25 minutes with his first international goal when Antonio Ruediger's header fell at the feet of the Chelsea player's centre-back partner, who fired into the bottom corner.

Five minutes from the break Gnabry made sure of the result when he sprinted onto Havertz's superb pass and slotted home.

The Russians were more aggressive after the break and midfielder Aleksei Ionov fired wide from close range with their best chance early in the second half.

The only bad news for Loew came with 25 minutes left when wing-back Jonas Hector had to be helped off with a leg injury.

I told you so. Germany will win and won. I am happy they are back to their winning ways again, over to the next match.