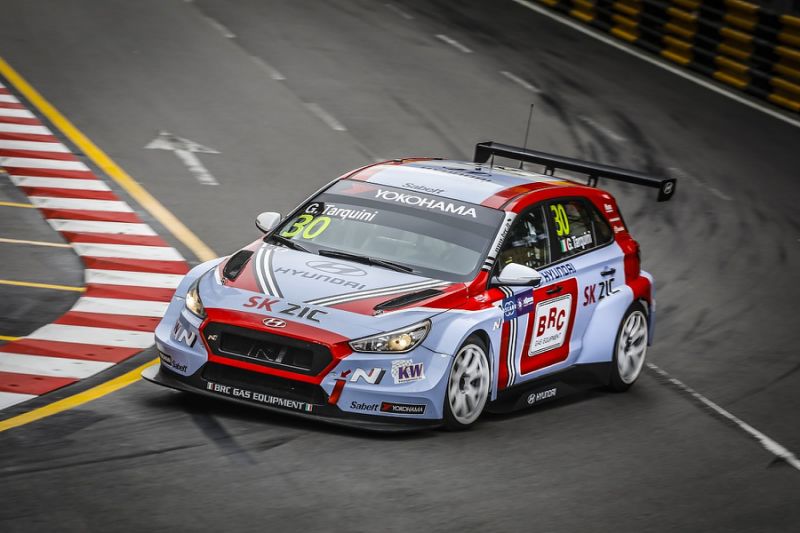 Fresh from securing first on the grid for race one in Friday's morning session, Huff topped all three parts of second qualifying to secure his eighth pole in Macau.

The Sebastien Loeb Racing driver, a nine-time winner of the Guia race, was 0.097 seconds down on Munnich Motorsport Honda driver Esteban Guerrieri through the first two sectors and then knocked his left wing mirror off exiting the Moorish right-hander.

But Huff survived that scrape with the barrier and produced a stunning third sector that put him close to half a second up on Guerrieri's pole position shootout benchmark, and crossed the line 0.374s clear with a 2m29.660s lap to deny the Honda driver pole for a second session in a row.

Norbert Michelisz qualified his BRC Racing Hyundai i30 N third, while Jean-Karl Vernay had been just 0.034s shy of Guerrieri's time entering the final sector in his WRT-run Audi RS3 LMS before brushing the wall exiting 'R' Bend and will start fourth.

Yann Ehrlacher was slowest of the five shootout runners in his Munnich Motorsport Civic, lapping a second slower than Huff.

His uncle Yvan Muller, who is in contention for a fifth World Touring Car crown in Macau this weekend, will start Sunday's races from fifth and sixth after missing the top five in second qualifying by a tenth and a half.

Muller spent a good deal of the first part of qualifying in danger but ultimately advanced to Q2, which gave his title hopes a double boost as it helped knock Tarquini out.

Tarquini had been inside the top-12 cutoff, but he stuffed his BRC Hyundai into the barrier at Lisboa on his final Q1 run and, despite being pushed by marshals, could not restart his car - which was instead recovered by a crane.

Subsequent improvements from team-mate Michelisz and Muller bumped him out.

Tarquini, who has a 39-point advantage over nearest rival Muller in the drivers' standings, will start Sunday's final two races of the season from 14th - one place behind Thed Bjork.

Bjork's YMR team managed to repair his i30 N before the start of the session after he crashed at Fisherman's Bend in qualifying for race one on Friday morning, but the Swede, who was knocked out after a late improvement from Berthon, said he was on the limit on his final run.

Kevin Tse Wing Kin was the fastest wildcard entrant in 24th, with a time of 2m34.551s lap in his Team Work Motorsport Audi RS3 LMS.