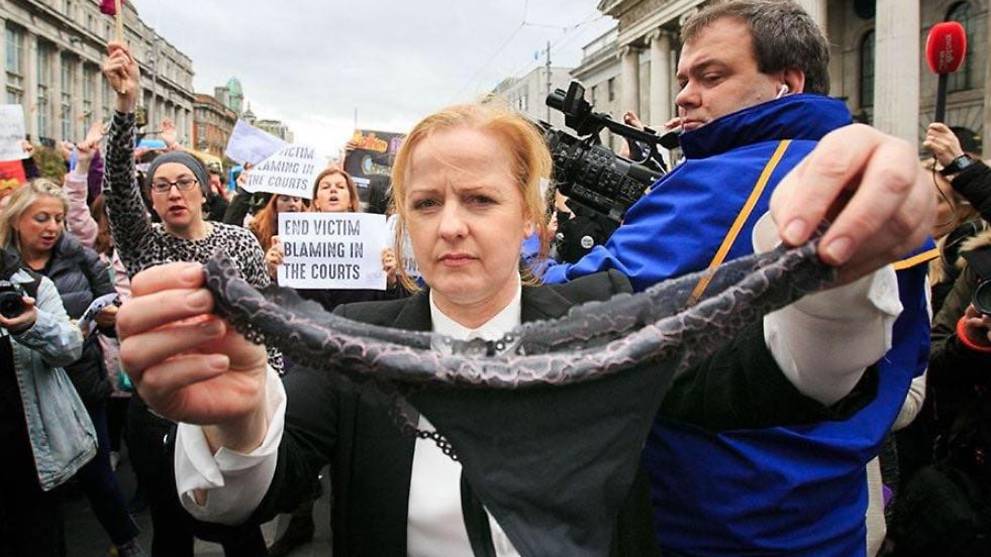 Irish MP Ruth Coppinger at a protest after a defence lawyer showed a 17-year-old girl's thong or G-string in court as alleged proof of her consent in a rape case. (Photo: Facebook/Ruth Coppinger)

DUBLIN: Protests have flared across Ireland this week triggering a viral campaign online after a defence lawyer showed a 17-year-old girl's thong or G-string in court as alleged proof of her consent in a rape case.

The outrage has included a female lawmaker brandishing underwear in parliament and women posting pictures of their thongs online with the hashtag #ThisIsNotConsent.

"It might seem embarrassing to show a pair of thongs in this incongruous setting," said Member of Parliament Ruth Coppinger - pulling the underwear from her sleeve against the objections of the speaker on Tuesday (Nov 13).

"But the reason I'm doing it - how do you think a rape victim or a woman feels at the incongruous setting of her underwear being shown in a court?"

She was referring to a rape case in the republic's southern city of Cork, where a girl's underwear was shown to jurors.

"A barrister actually told a jury to 'look at the way she was dressed', that she was 'open to meeting someone' because she was 'wearing a thong with a laced front'," Coppinger added.

"Women in this country are getting a little bit weary at the routine victim-blaming going on in Irish courts."

Protests have now taken place in the cities of Dublin and Cork as well as Belfast in Northern Ireland - with women appearing brandishing pairs of underwear and placards emblazoned with the phrase "This is not consent."

NWCI and @ItStopsNow_EU are at the rally in Dublin in protest of language used in courts against victims of sexual violence and rape. Today, and every day, we express our solidarity with survivors. #ThisIsNotConsent #itstopsnow pic.twitter.com/xFaaelJf5s

Protestors are calling for a reform in Irish rape prosecution laws to deny the defence practice which they say reflects a culture of victim-blaming.

She said culture places "enormous pressure" on women and girls "to be sexualised and to present sexually" - but that rape trials then often punish that same behaviour with the use of such "evidence".

Clothing, as well as fake tan and contraception, have all been used as alleged proof of consent in recent rape trials, Coppinger said Tuesday.

#ThisIsNotConsent #IBelieveHerIreland Ladies, get your knickers out. Here are mine. A 27-yo man in Ireland found not guilty of raping a 17-yo; her underwear was used in court as evidence of consent. NO. NO. NO. Join me and I Believe Her - Ireland by protesting with your panties. pic.twitter.com/GQzxU4g1nC

These latest protests follow demonstrations in Ireland and Northern Ireland after the so-called Belfast rugby rape trial - when Ireland players Paddy Jackson and Stuart Olding were acquitted of raping a woman in 2016.

More than 4,000 protesters gathered in Dublin after the pair walked free in March.