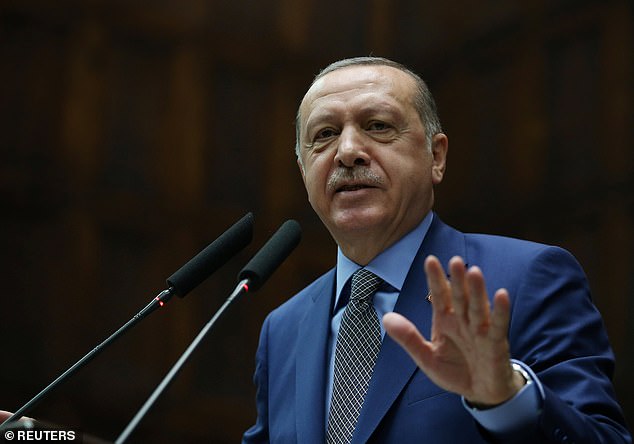 Enjoy up to 5% rebate with BOC credit cards
Need a date? Sign up for SDN-approved events now

The second voice recording - said to be 15 minutes long - clearly reveals that the murder of the Washington Post columnist had been premeditated, the Hurriyet newspaper said.

That would directly contradict the statement of the Saudi prosecutor, who has insisted that the original instructions issued to the 'hit squad' were either persuade Khashoggi to return to Saudi Arabia or - if he refused - kidnap him.

Saudi officials said Thursday that five members of the squad faced the death penalty on charges of killing Khashoggi, but exonerated the country's powerful Crown Prince Mohammed bin Salman of involvement in the murder.

Khashoggi, 59, a mild critic of the crown prince, was killed and dismembered in the Saudi consulate in Istanbul on October 2 after making an appointment to collect papers for his upcoming wedding.

Saleh Khashoggi (left) being comforted by a mourner in Jeddah today. Saudi Arabia has sought to draw a line under one of its biggest crises triggered by critic Jamal Khashoggi's murder, but an ever greater threat of international scrutiny and pressure hangs over the kingdom

Hundreds of people gathered to perform a funeral prayer in absentia for Khashoggi at the Fatih Mosque in Istanbul today, while the journalist's son Salah hosted a  ceremony in Jeddah, Saudi Arabia.

Turkey has said the murder was carried out by a team of Saudis who travelled to the city for that purpose.

President Recep Tayyip Erdogan has said the order came from 'the highest levels' of the Riyadh government, but stopped just short of pointing the finger of blame directly at the crown prince.

Abdulkadir Selvi, pro-government columnist in the Hurriyet daily, said key findings in the Saudi prosecutor's statement did not overlap with the evidence in the hands of Turkey including two voice recordings.

A funeral prayer was held today for Khashoggi, a frequent contributor to The Washington Post, who was killed on October 2 inside the Saudi Consulate in Istanbul

Hundreds of friends and wellwishers attended the symbolic funeral for Khashoggi, whose remains have not yet been found or returned to his family. The second voice recording - said to be 15 minutes long - clearly reveals that the murder of the Washington Post columnist had been premeditated

He claimed that the first seven-minute voice recording proves that Khashoggi was strangled but the second tape recorded shortly before the journalist stepped into the consulate clearly shows the murder was planned in advance.

The second tape proves the 15-member 'killer team' seated inside the consulate before Khashoggi's arrival was discussing how to carry out the murder, he said.

Turkey has also evidence that the team made international calls after the murder, he added.

Turkish President Recep Tayyip Erdogan has said the order came from 'the highest levels' of the Riyadh government, but stopped short of pointing the finger of blame at the crown prince

Saudi prosecutors on Thursday announced indictments against 11 people and said a total of 21 individuals were in custody in connection with the killing.

Shalaan al-Shalaan, the kingdom's deputy public prosecutor, requested the death penalty for five who 'are charged with ordering and committing the crime and for the appropriate sentences for the other indicted individuals'.

But he exonerated Saudi's de-facto ruler Mohammed bin Salman by laying ultimate blame for Khashoggi's killing at the feet of two lesser officials.

Executions in Saudi Arabia are usually carried out publicly by beheading with a sword.

Shalaan al-Shalaan, the deputy public prosecutor of Saudi Arabia, revealed that 21 people are in custody over the killing and 11 of them have been charged

Shalaan said the highest-level official implicated in Khashoggi's killing is former deputy intelligence chief Ahmed al-Assiri, who gave the order for him to be repatriated to Saudi Arabia from Turkey, where he was living in exile.

He added that it was 'the head of the negotiating team' dispatched to seize Khashoggi who then gave the order to kill him, without naming the man.

Shalaan denied that Salman had any knowledge of the killing. The Crown Prince has blamed it on 'rogue elements' of the Saudi state.

That was a claim backed by foreign minister Adel al-Jubeir who said bin Salman has 'absolutely nothing to do' with the death.

'Sometimes mistakes happen... sometimes people exceed their authority,' he said before adding Saudi was taking steps 'to make sure this doesn't happen again.'

Meanwhile Turkey's public prosecutor said news of the charges was 'positive but insufficient'.

Turkey has previously said it believes officials at the very top level of Saudi's ruling family are to blame for the murder, but stopped short of accusing bin Salman.

Saudi Arabia added that it believes Khashoggi was given a lethal injection inside the country's consulate in Istanbul on October 2.

Top intelligence officer General Ahmed al-Assiri was fired in connection with the death, and is now facing charges

His body was then dismembered and taken out of the building, Shalaan said, though admitted the kingdom does not not know where the remains are now.

Investigations are ongoing to find the remains, the prosecutor insisted.

Hatice Cengiz, Khashoggi's fiancee who was with him at the consulate the day he died to retrieve documents allowing them to marry, has demanded the kingdom hand back his remains for a proper burial.

After repeated denials, Saudi Arabia finally admitted in mid-October that Khashoggi had been murdered at the compound, but blamed it on a 'rogue' operation.

The prosecutor has requested the death penalty for the five who 'are charged with ordering and committing the crime and for the appropriate sentences for the other indicted individuals,' an official statement published by state news agency SPA said.

It said a total of 21 individuals were in custody in connection with the killing, 11 of whom have been indicted with investigations to continue into the others.

Turkey on Wednesday called for an international investigation into the murder.

Ankara has already shared voice recordings linked to the murder with a number of countries including Saudi Arabia, the United States and its Western allies.

Jamal Khashoggi's Turkish fiancee Hatice Cengiz gets emotional during an interview on Turkish news channel Haber Turk. Cengiz wants the journalist's body to be returned for a proper burial

X-ray images taken in Istanbul's Ataturk airport of the hit squad's luggage showed syringes and radios. Jamal Khashoggi was killed on October 2 inside the Saudi consulate in Istanbul on the same day the 15-man squad flew in

Khashoggi's killing has plunged the world's top oil exporter into its worst diplomatic crisis since the September 11, 2001 terrorist attacks on the United States, in which most of the hijackers were identified as Saudi nationals.

After first insisting Khashoggi left the consulate unharmed, Saudi authorities said he was killed in an argument that degenerated into a brawl before finally accepting what Turkey had said virtually from the start - that he was killed in a premeditated hit.

The global fallout over the murder has tainted the image of 33-year-old Prince Mohammed - the de facto ruler and heir apparent - despite persistent Saudi denials that he was involved.

Khashoggi's murder has also led to increased scrutiny of Saudi Arabia's role in the Yemen war, which has pushed the impoverished country to the brink of famine.

The journalist went into self-imposed exile in the United States in 2017 after falling out with Prince Mohammed.