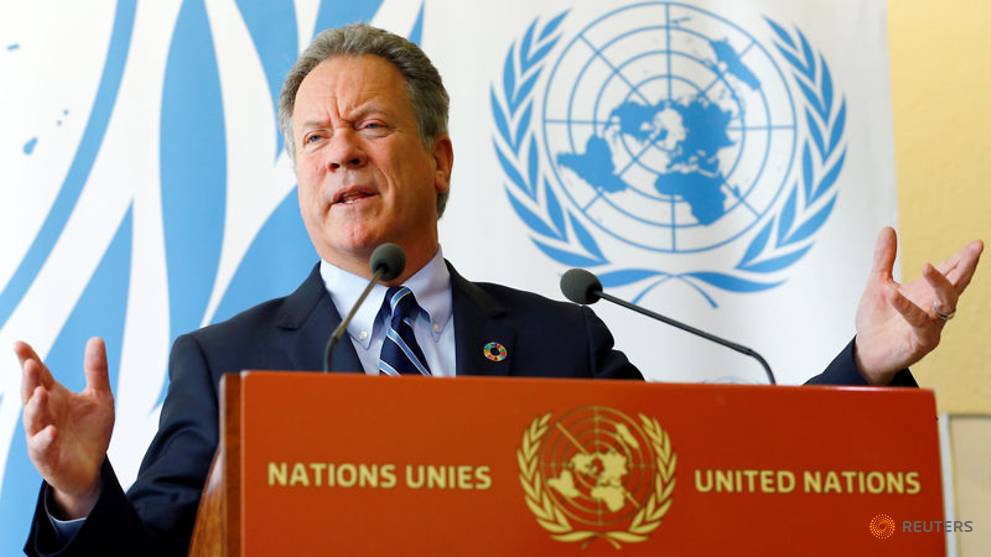 United Nations food chief David Beasley spotted a tiny foot sticking out from under a blanket in a hospital in Yemen that has been overwhelmed with malnourished children, so he tried to bring a smile to the face of the small patient.

UNITED NATIONS: United Nations food chief David Beasley spotted a tiny foot sticking out from under a blanket in a hospital in Yemen that has been overwhelmed with malnourished children, so he tried to bring a smile to the face of the small patient.

"It was just like tickling a ghost," Beasley, executive director of the World Food Programme, told reporters in New York on Friday after returning from a three-day visit to the war-torn, impoverished Arabian Peninsula country.

Beasley recounted a conversation he had with a doctor at the hospital in the country's capital Sanaa: "He said 'every day about 50 children are brought to us. We have to send 30 home to die. We can only accommodate 20.'"

Beasley will brief the U.N. Security Council on Friday with U.N. aid chief Mark Lowcock and U.N. Yemen envoy Martin Griffiths, who is trying to broker peace in the more than three-year conflict seen as a proxy war between Saudi Arabia and Iran.

A Saudi-led military coalition intervened in Yemen in 2015, backing government forces fighting the Iran-allied Houthi group. The Houthis now rule most of Yemen's population, while the exiled government controls a section of the south.

The country's economy is in crisis and three-quarters of Yemen's population, or 22 million people, require aid. Some 8.4 million are on the brink of starvation, though Lowcock has warned that will likely rise to 14 million.

"You cannot solve the humanitarian crisis in Yemen today with humanitarian response alone. It's now going to require an economic infusion of substantial liquidity. Both are going to be required to avert a famine," he said.

Yemen's riyal has lost more than half its value against the U.S. dollar since the start of the war. Soaring prices have put some basic commodities out of reach for many Yemenis and the central bank has struggled to pay public-sector salaries on which many depend as foreign exchange reserves dwindle.

Beasley also visited Yemen's main port city Hodeidah, which handles 80 percent of the country's food imports and aid supplies. The Saudi-led coalition has ordered a halt in a log-running offensive against the Houthis in Hodeidah, sources said on Thursday.

"That port has got to protected at all costs," Beasley said.

"We are prepared, if necessary, if all parties desire, for the U.N. to take over the operational capacity of the port. We are prepared to do that, we do not want to do that, but if that's what it takes we will do it," he said.

Beasley also spoke about seeing an eight-month-old baby boy at the hospital in Sanaa who weighed a third of what he should. His mother had driven hundreds of miles through military checkpoints to get him medical help.