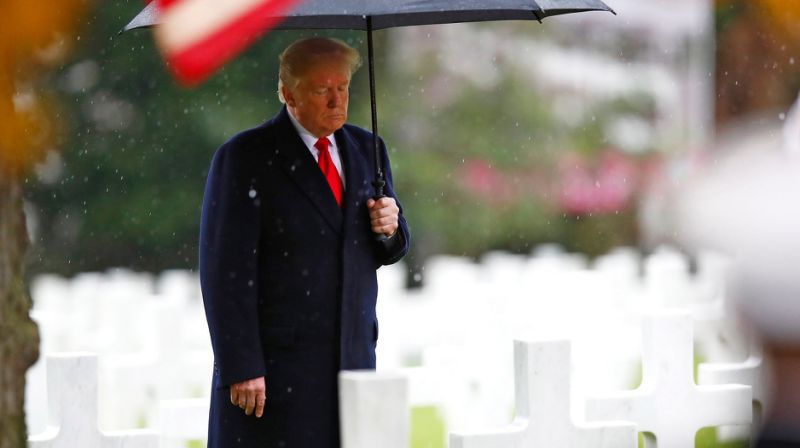 President Donald Trump loves to talk about his love of U.S. soldiers, but did absolutely nothing to honor them on Veterans Day because he was “busy on calls.”

In an interview with Fox News Sunday’s Chris Wallace airing later this weekend, the host asked the president why he didn’t visit Arlington National Cemetery on the holiday honoring U.S. veterans.

“I should have done that, I was extremely busy on calls for the country, we did a lot of calling as you know,” Trump said, according to a partial transcript of the interview given to reporters.

Trump on going to Arlington National Cemetery on Veteran's Day:"I should have done that," but says he was busy. pic.twitter.com/or1D88k0r4

Pressed on the question, Trump then said he assumed it would be fine to skip the honoring and added that he was “busy because of affairs of state.”

Trump’s comments follow his embarrassing refusal to honor World War I soldiers in France for an event marking the 100th anniversary of the end to the war. Trump blamed the rain for keeping him from the gathering at the Aisne-Marne American Cemetery last week. But that same weather didn’t stop French President Emmanuel Macron and German Chancellor Angela Merkel from showing up to pay their respects in northern France where the Allies and Germany signed the armistice ending the war.

Days later, Trump blamed the Secret Service for keeping him from the cemetery in a tweet.

By the way, when the helicopter couldn’t fly to the first cemetery in France because of almost zero visibility, I suggested driving. Secret Service said NO, too far from airport & big Paris shutdown. Speech next day at American Cemetery in pouring rain! Little reported-Fake News!

“Secret Service said NO, too far from airport & big Paris shutdown,” Trump tweeted, adding that he gave a later speech in the rain at another ceremony. “Speech next day at American Cemetery in pouring rain! Little reported-Fake News!”

At that later speech in Paris addressing World War II veterans, Trump lamented having to stand in a light rain.

“You look so comfortable up there, under shelter,” Trump told the veterans. “We are getting drenched, you’re very smart people.”

Despite Trump’s rhetoric declaring his love of the U.S. military, he’s done little to show his appreciation for past and current soldiers. He still has not visited U.S. troops in an active war zone, has needlessly stationed thousands of soldiers near the U.S.-Mexico border to confront a caravan of asylum-seekers still months away, and was willing to spend an estimated $92 million in taxpayer money to fund his Big Boy military parade, which was suspended indefinitely when it was projected to go millions of dollars over budget.

British Parliament member Nicholas Soames ― a grandson of Winston Churchill ― reacted to Trump’s absence at the cemetery event in France by calling the U.S. president “pathetic.”