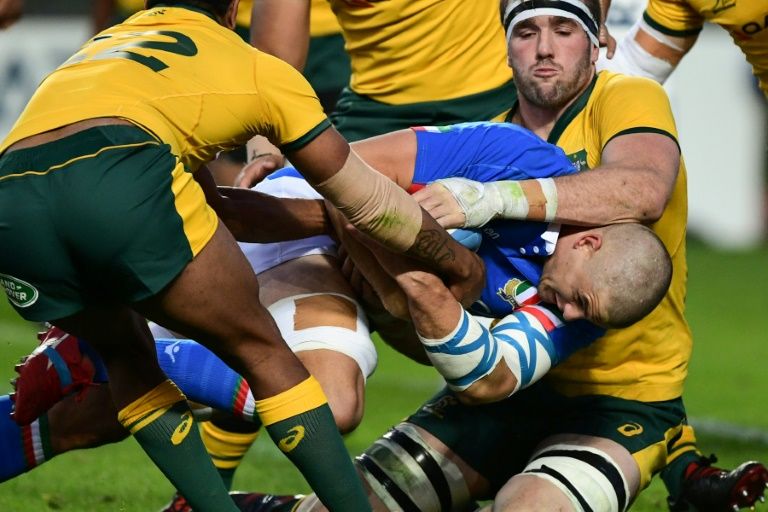 Koroibete crossed twice in the first half, with Taniela Tupou and Will Genia adding two more after the break to get the Wallabies back to winning ways after last weekend's defeat to Wales in Cardiff.

Italy's had held out against the two-time world champions for the first half an hour in north-eastern Italy with Tito Tebaldi and Braam Steyn both having tries disallowed for the Azzurri.

But Koroibete broke through after 30 minutes in the Stadio Euganeo, scoring two tries within five minutes and Matt To'omua converting both for a 14-0 half-time lead.

Koroibete, a rugby league convert, had been named as a late replacement for injured Jordan Petaia, 18, who had been set to make his test debut.

Veteran Adam Ashley-Cooper, returning for the first time since August 2016, played a role in both Koroibete's tries.

Jake Gordon made his Australian debut with Israel Folau shifting to fullback to accommodate veteran Ashley-Cooper.

The 34-year-old Ashley-Cooper ran out for his 117th Test and in doing so becomes the third-most capped Wallabies player ahead of former captain Nathan Sharpe.

Conor O'Shea's Italian side were coming off last weekend's impressive 28-17 win over Georgia in Florence, but paid for a lack of discipline.

Jayden Hayward did well breaking the Australian defence early, kicking the ball forward for Steyn but the Australians took him out just before the try line.

Tebaldi broke through after 13 minutes with a solo run but the referee ruled that he was in an offside position.

But Samu Kerevi lit the spark for the Wallabies, with good work as Ashley-Cooper and David Pocock set up Koroibete who went over for the first try, quickly getting a foothold in the game with a second.

Tupou added a third just after the break before Italy wing Mattia Bellini got Italy off the mark with Tommaso Allan converting.

But Genia came off the bench to score Australia's fourth as the Azzurri fell to their 18th defeat against the Wallabies, and tenth on home soil.

Italy play world champions New Zealand in Rome on November 24, with Australia taking on England the same day at Twickenham.