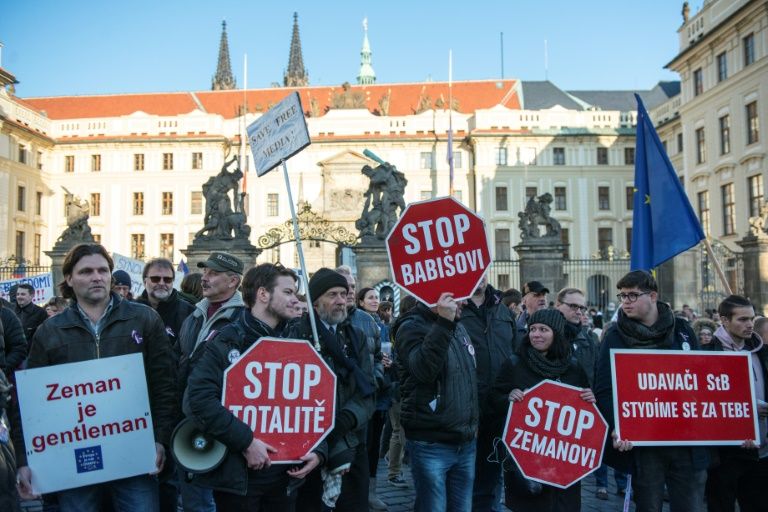 Spice World is looking for waiters

Tens of thousands of Czechs rallied in Prague on Saturday calling for Prime Minister Andrej Babis to resign as the country marked the 29th anniversary of the Velvet Revolution that toppled the communist regime.

Crowds gathered in several parts of the capital to raise pressure on Babis, a billionaire who faces criminal charges over alleged EU subsidy fraud dating back a decade ago.

He is suspected of abusing EU funds to build the luxury Stork Nest farm near Prague in 2007-2008.

On Monday, Czech media quoted Babis' son as saying he was forcibly sent to Crimea to thwart a fraud inquiry into his father's past business dealings.

Some protestors also accused the premier of collaborating with the communist secret police StB prior to the government's non-violent overthrow in 1989.

"It is inadmissible that someone under investigation and a StB collaborator is prime minister," said Mikulas Minar, head of a group that organised a protest by around 20,000 people in the city centre.

The protesters chanted "resignation" and "shame", and a wreath that Babis had laid a day earlier in honour of the non-violent 1989 revolt was discarded on Saturday.

The Czech premier faces a vote of no-confidence on November 23, but President Milos Zeman has said he would rename Babis to the post even if he fails to obtain approval by lawmakers.

Meanwhile, reporters from the Seznam Zpravy news website recorded an interview in Switzerland with Andrej Babis Jr., 35, who said he had been kidnapped to prevent him from testifying against his father.

Babis Sr. said his son suffers from schizophrenia, a claim the latter has dismissed as "a lie".

The Czech premier vowed Friday he would "never resign, never" before leaving to meet his son in Switzerland.