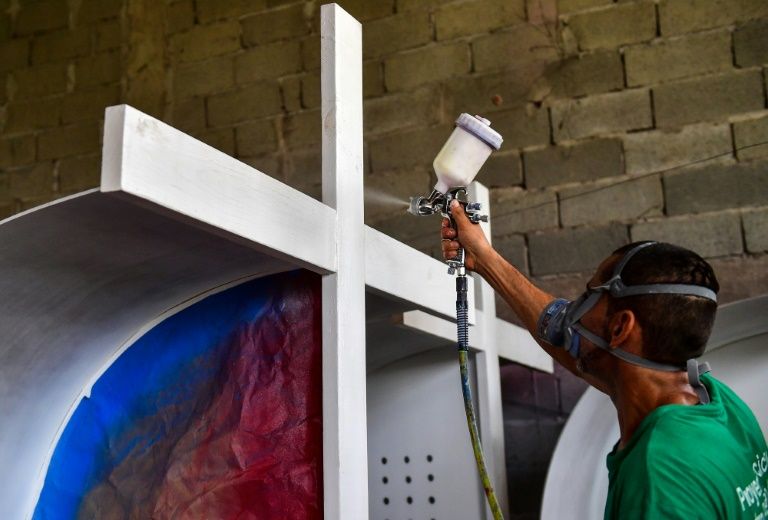 Enjoy up to 5% rebate with BOC credit cards
Enjoy the best prices with services from YIJINTECH Aircon!

Amid swirling sawdust and the smell of fresh paint, the inmates of a grim Panamanian prison are diligently preparing for the upcoming visit of Pope Francis, hoping for forgiveness and praying for freedom.

The sound of nails being deftly hammered into wood mingles with music in the makeshift workshop of the overcrowded La Joya prison, northeast of Panama City.

Around 30 inmates are busy making confession boxes that will be used by pilgrims to confess their sins to priests during the pope's January 22-27 visit to mark the Catholic World Youth Day festival.

A painting on one of the walls at the entrance to La Joya seems oddly prophetic: "God impacts your life, let yourself be led to him."

Inmates like Felix Salinas hold out hope that a papal visit will impact their lives in some concrete way.

"I would ask him to give me a chance. A pardon at least. Because that is what we all want here," said Salinas, a 50-year-old driver locked up here since 2015.

Justino Hernandez, 62 and a devout Catholic, is particularly looking forward to the papal visit, the first to the Central American country since the late John Paul II made the trip in 1983.

"The most important thing is to tell him that we are all entitled to a second chance and to freedom, that he gives us the chance to get out of this place," he said.

Hernandez is prepared to ask the pope's forgiveness "as many times as he wants."

The pope's agenda has yet to be finalized, and though he has visited prisons before, there has been no suggestion that he will visit the inmates of La Joya.

The 9,700 inmates packed into La Joya is double the prison's capacity. Conditions here have been condemned by human rights organizations.

From 8:00 am to 4:00 pm, the prisoners cut out traced designs from wood panels, assemble crosses and then sand, paint and upholster the confessionals, under an instructor's watchful eye.

It's unpaid work, but most detainees hope their reward will come from Francis noticing their handiwork, or at least being told about it, and then pardon them -- failing that, a papal blessing.

The brightly painted confessional booths will be set up in a so-called "Park of Forgiveness," an area of the capital's Omar Park that will be dedicated to WYD activities.

Most of the detainees have never done this kind of work before but it has been such a success that the prison has received orders to make 70 information kiosks and to prepare food bags for pilgrims.

Sharon Diaz, deputy head of the Penitentiary system, told AFP that the project -- rewarded by a day's deduction from inmates' sentences for every two days worked -- has surpassed expectations.

"They have taken on this task not only in a personal way but in a spiritual way too, and the surprising thing about this initiative is that these are people deprived of freedom who don't profess the Catholic faith, and yet have still been enthusiastic," said Diaz.

The project's supervisor Luis Vega said "there are no complications with them. They are very cooperative."

Authorities expect hundreds of thousands of pilgrims, most of them from Latin America, to visit Panama for World Youth Day.

For one of the prisoners, Jesus Argueles, their project is a "grain of salt" in "something great worldwide, that's going to be happening here in Panama."

"I feel that all this is a message from God," said inmate Melis Guerrero over the hiss of paint sprayers.

"I have heard from many of them that they have hopes the pope will go to them, bless them, look at them and recognize that they made an effort to do this work," said Diaz.

"They want to show their forgiveness and repentance to the pope."