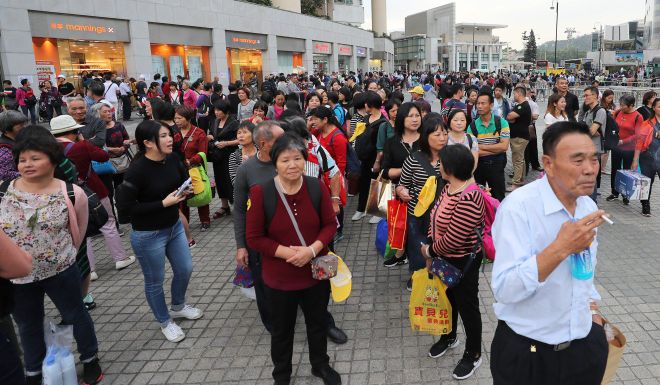 A shopping mall and another car park should be built at the Hong Kong port of the new cross-border bridge, where a lack of facilities have led to chaos at the nearby town of Tung Chung, according to lawmaker Michael Tien Puk-sun.

The lawmaker from pro-establishment group Roundtable criticised the Hong Kong government for, as he saw it, failing to provide sufficient facilities at the local end of the Hong Kong-Zhuhai-Macau Bridge.

He floated the added facilities as a way of easing the crowds, mainly of people from mainland China, which have beset Tung Chung since the bridge opened almost a month ago. Tens of thousands of people in mainland tour groups, mostly on day trips, have of late descended on the town by public bus for shopping, dining and sightseeing, angering some local residents.

The 55km bridge, on which Hong Kong spent HK$120 billion, links Hong Kong, Zhuhai and Macau, which together with eight other cities in Guangdong province form the “Greater Bay Area”, which the central government hopes to make into a global tech hub.

Tien called for a car park with about 1,000 to 2,000 spaces for cars not entering the city, as well as a shopping mall of more than 1 million square feet, on the artificial island which houses the bridge’s local border checkpoint.

Such developments would only take up a small part of the 150-hectare island, to the north of Tung Chung and next to the airport, which already has the Hong Kong port building and a car park with 600 spaces. The government has yet to reveal its final plans for the rest of the island. Representatives from the logistics industry have called for it to house facilities for cross-border deliveries.

Tien noted Macau has a car park at its port on the other side of the bridge, where drivers change onto other transport to get to the city centre.

He said a mall close to the bridge could ease the burden on shopping centres in Tung Chung.

“We need to give back to residents of Tung Chung ... a proper environment,” Tien said. “There is a chance to divert the flow of people before they enter the city.”

The Hong Kong government on Friday announced further measures to control crowds by increasing the number of port-to-port shuttle buses and loosening the application process for licences to operate the buses.

“Members of the local community [in Tung Chung] have also found the situation has eased a bit and is less severe,” Cheung said.

He said souvenir shops would open in the passenger clearance building, so visitors could to do their shopping without leaving the building.

He added that police and the Immigration Department were consulting the Department of Justice on how best to crack down on illegal tour operators – another source of ire from Tung Chung residents.

According to figures from the Immigration Department, more than 103,000 passengers crossed the port area of the bridge on Saturday, a record high. They included 48,450 passengers entering the city and 54,781 leaving.