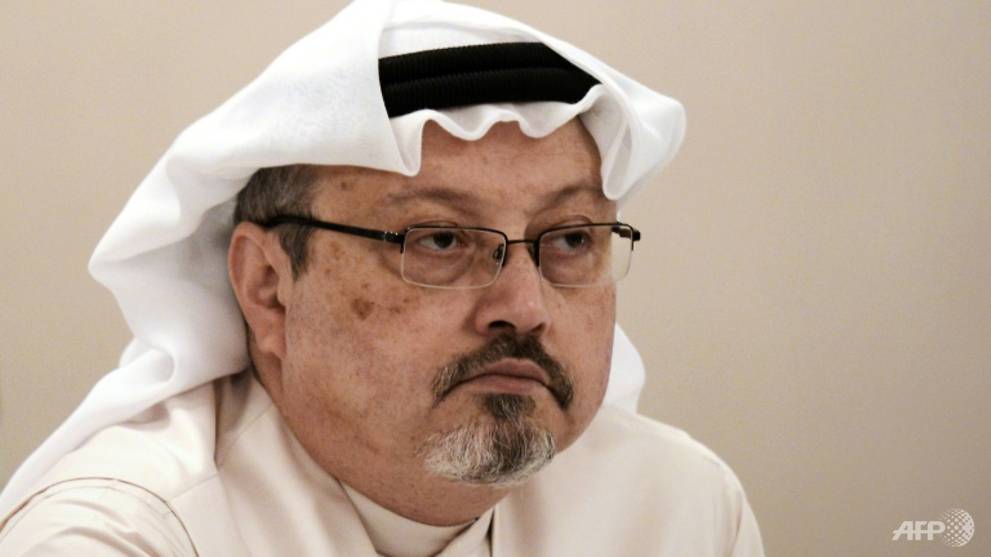 In his final column for The Washington Post, Saudi journalist Jamal Khashoggi perhaps presciently pleaded for greater freedom of expression in the Middle East. (AFP/MOHAMMED AL-SHAIKH)

WASHINGTON: US President Donald Trump says he has been fully briefed on an audio recording of journalist Jamal Khashoggi's murder but does not want to listen to it himself.

"Because it's a suffering tape. It's a terrible tape," he said in an interview with "Fox News Sunday."

"It was very violent, very vicious and terrible."

Trump refrained from blaming Saudi Crown Prince Mohammed Bin Salman, even though the CIA reportedly concluded that he ordered the Oct 2 assassination in the Saudi consulate in Istanbul.

The US assessment that Saudi Crown Prince Mohammed bin Salman (pictured October 2018) was behind the killing of journalist Jamal Khashoggi directly contradicts the conclusions of a Saudi prosecutor, which exonerated the prince of involvement. (AFP/FAYEZ NURELDINE)

Trump on Saturday told reporters that the US would release "a very full report" on the matter as early as Monday. He was interviewed by Fox on Friday.

Asked whether the crown prince had lied to him in denying any role in the killing, Trump said: "I don't know. Who can really know? But I can say this, he's got many people ... that say he had no knowledge."

"He told me that he had nothing to do with it. He told me that, I would say, maybe five times at different points, as recently as a few days ago," Trump added.

The president acknowledged that people close to the prince "were probably involved" but added, "I want to stick with an ally that in many ways has been very good."

Asked whether he would go along with moves in the US Congress to cut off US involvement in the Saudi-led war in Yemen or halt arms sales to the kingdom, Trump equivocated.

"I want to see Yemen end. It takes two to tango and Iran has to end also," he said. "I want Saudi to stop but I want Iran to stop also."

The United States has called for a ceasefire and peace talks to end the three-year-old conflict amid a mounting international outcry over the massive civilian toll of air strikes.

US air refueling flights in support of Saudi-led air operations in Yemen ended last week. US Defense Secretary Jim Mattis portrayed that as a Saudi decision.

Saudi Arabia and its ally the United Arab Emirates intervened in the conflict against Iranian-backed Huthi rebels in 2015 in support of President Abedrabbo Mansour Hadi.

Khashoggi, a columnist for The Washington Post who was critical of the crown prince, was killed after going to the Saudi consulate in Istanbul to retrieve documents necessary to marry his Turkish fiancee.

According to Turkish officials, the audio shows that Kashoggi was strangled to death and dismembered soon after entering the consulate.

Saudi Arabia has offered shifting accounts of what happened, initially saying Khashoggi left the embassy after receiving his documents and later that he was killed when an argument degenerated into a fistfight.

In the latest version, the Saudi prosecutor said a 15-member team went to Istanbul to bring Khashoggi back to the kingdom but killed him instead in a rogue operation.

The United States has sanctioned 17 Saudis for the crime.

I guess Trump has decided to close an eye on the murder committed by this scumbag prince because Saudi is a ally n that tons of $$$ are coming in buying arms n weapons n hence providing thousands of employment ! So it is true that this scumbag Saudi prince is above the law n got away with a heinous crime ! ! ! 💩🤬🤪👎