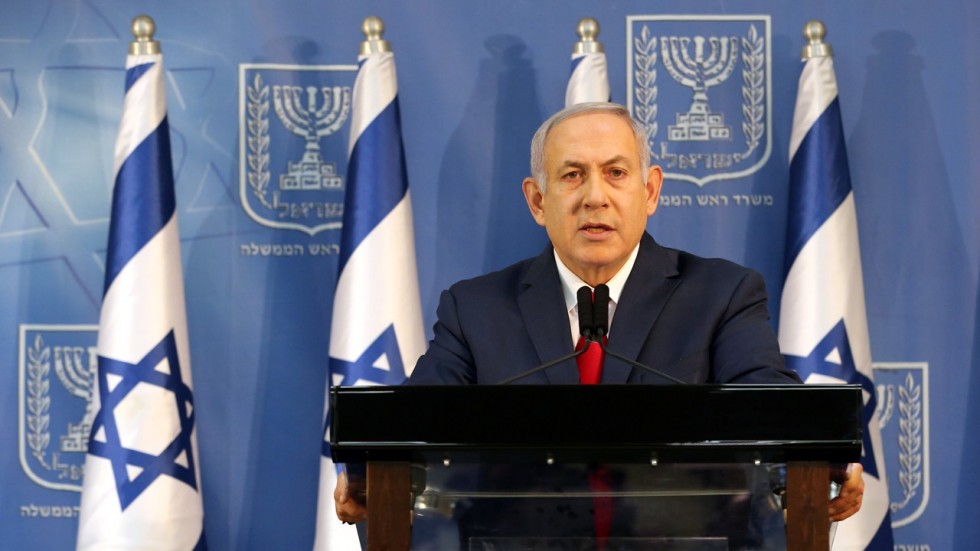 Israeli Prime Minister Benjamin Netanyahu denounced calls for snap elections as “irresponsible” in an impassioned televised address on Sunday and vowed to push on despite a coalition crisis threatening to bring down his government.

As the nation looked on for word on whether Israel was headed for early polls, Netanyahu used the prime-time address to defend his security credentials and make the case for why he wants to hold his coalition together.

“The security of the country is above political considerations,” Netanyahu said while insisting that calling elections now would be “irresponsible”.

But even as he prepared to speak, Education Minister Naftali Bennett, a key coalition partner and one of Netanyahu’s main right-wing rivals, announced he would give his own statement on Monday morning.

Bennett’s far-right Jewish Home party has threatened to withdraw from Netanyahu’s coalition if he is not given the defence portfolio.

Netanyahu said in his address that he intended to retain the defence portfolio at least for now.

He also spoke of his military experience and said he could not publicly explain in detail the sensitive security moves currently being taken by Israel.

“We will defeat our enemies and I do not minimise the challenges that are facing us,” he said, speaking from Israel’s defence headquarters in Tel Aviv.

The longtime premier made the appearance as he came under pressure over a controversial ceasefire deal last week that ended the worst escalation between Israel and Palestinian militants in Gaza since a 2014 war.

On Wednesday, Defence Minister Avigdor Lieberman resigned over the ceasefire, throwing the government into crisis and leading to speculation that early elections had become inevitable.

After Lieberman’s withdrawal along with his Yisrael Beitenu party, Netanyahu’s government was left clinging to a one-seat majority in the 120-seat parliament.

Key coalition partners say that is unworkable even though elections are not due until November 2019.

Kahlon’s office said earlier that his meeting with Netanyahu ended without a conclusion and they would meet again later in the week.

In a sign of a possible agreement being worked out, a spokesman for Netanyahu’s Likud party said the premier would “decide on the appointment of ministers in the coming days,” but provided no further details.

Earlier Sunday, Netanyahu sought to portray business as usual, meeting with the military chief of staff, his incoming successor and the head of the internal security agency Shin Bet, the Likud spokesman said.

He also held the weekly cabinet meeting as usual.

Kahlon said before his meeting with Netanyahu that he did not think it was possible to continue with the existing coalition.

On Saturday, Bennett, whose Jewish Home has eight seats, told Israeli television that Lieberman had “collapsed the government”.

“There is no more government and we are heading towards elections,” he said.

Bennett declined to comment to journalists when entering Sunday’s cabinet meeting, but Justice Minister Ayelet Shaked of his Jewish Home party said in a statement that making him defence minister was “the only justification” to keep the government together.

A source close to Bennett said the two had agreed that “it would be senseless to continue” with the same coalition.

Within minutes, a statement from Netanyahu’s Likud said that was wrong.

The crisis was set into motion with Lieberman’s resignation over the ceasefire, which he labelled “capitulating to terror”.

He also slammed Netanyahu’s recent decision to allow Qatar to send millions of dollars in aid to the blockaded Palestinian enclave.

Israeli residents of southern communities hit by barrages of rockets from Gaza last week have also protested, calling for tough action against Hamas, with which Israel has fought three wars since 2008.

A poll published after the ceasefire found 74 per cent of respondents were unhappy with Netanyahu’s handling of the escalation with Gaza and its Islamist rulers Hamas, though it also showed his party would still easily win the most seats.

There has long been speculation that the premier may call elections before they are due, particularly with police having recommended charges against him in two corruption probes.

The attorney general is expected to decide in the coming months whether to pursue charges against him, and some analysts believe he would be better positioned to combat them with a fresh electoral mandate.

But Netanyahu would want to make such a move at the most advantageous time and likely not with public attention focused on the Gaza ceasefire.