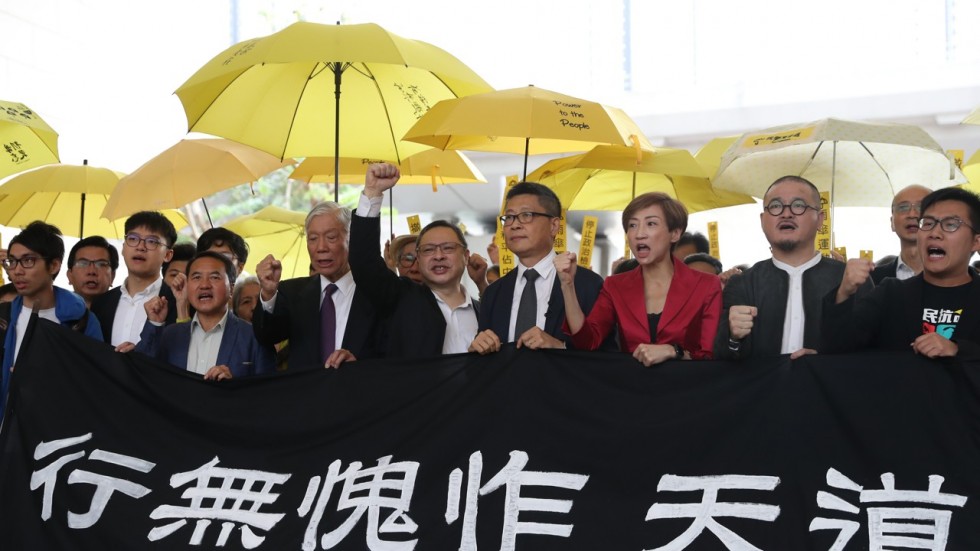 Hong Kong’s leader has hit out at British legislators who criticised the city’s prosecution of nine key figures from 2014’s pro-democracy Occupy protests, saying foreign politicians should not “interfere with the city’s internal affairs”.

Ahead of the public nuisance trial, which started on Monday, several British politicians tabled a motion at the House of Commons to condemn the government’s “use of vague and ambiguous common law charges apparently intended to intimidate and silence pro-democracy figures”.

The motion, tabled by Fiona Bruce, chair of the Conservative Party Human Rights Commission, urged the British government to raise the issue with the Hong Kong government and “consider further action”. It was co-signed by seven other members of parliament.

Speaking in Papua New Guinea on Monday, Lam suggested the condemnation was tantamount to demanding certain decisions from the city’s justice department.

“Under the prerequisite of Hong Kong’s judicial independence and the rule of law, it was our prosecution authority that made prosecution decisions,” she said.

In a reference to Hong Kong’s mini-constitution, Lam added: “Under the Basic Law, [the power to make] decisions regarding prosecution only belongs to the secretary for justice. Even I myself, as the chief executive, would not make or interfere with such a decision.”

“Now it is foreign governments or parliamentarians who are demanding we make certain decisions in prosecution. This is very obviously interfering with internal affairs, and is very undesirable,” she added.

In their motion, the British MPs also noted that the current trial is not in isolation.

“More than 100 pro-democracy protesters have been charged, and many jailed, on the basis of common law charges which curtail freedom of expression and have been criticised by the United Nations Human Rights Committee,” they added.

Those jailed most notably include three student leaders of the Occupy protests, Joshua Wong Chi-fung, Alex Chow Yong-kang and Nathan Law Kwun-chung. They were sentenced to six to eight months in prison over the protest that triggered the wider sit-ins in major areas of the city, which lasted 79 days. The jail term was overturned by the Court of Final Appeal in February this year.