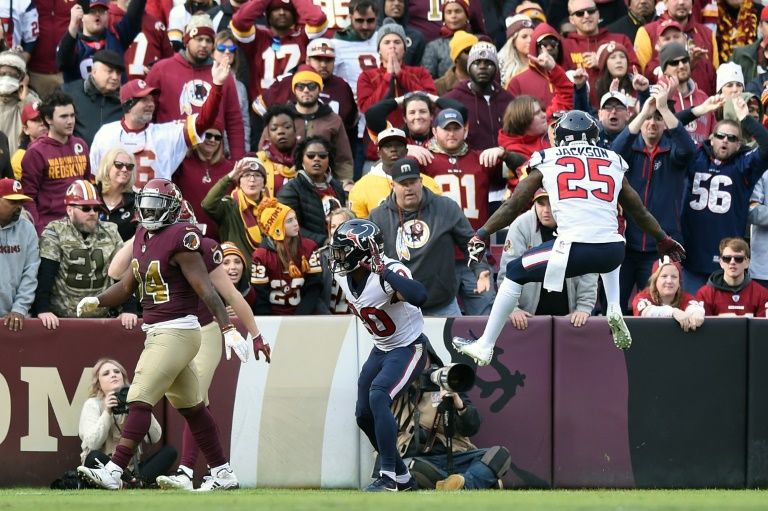 Reid intercepted Smith's pass intended for tight end Jordan Reed in the end zone and ran the length of the field for a touchdown that put Houston up 17-7 with 2:38 left in the second quarter.

"As soon as I felt like I was in leverage, I looked back to see if the quarterback threw the ball and the ball was already in the air and it was just floating up there for me," Reid said.

"I came down with it and at that point I just saw daylight. I got tackled two times before and this was actually the first pick-six of my life.

"So I saw the daylight and I had to hit it. I wasn't going to let anyone stop me."

The Texans now hold a two-game lead in the AFC South after the Tennessee Titans' 38-10 loss to the Indianapolis Colts.

"(It) wasn't clean, but we know there is something about this team right now," Texans coach Bill O'Brien said. "They have a strong belief in each other and came up big in the end. The defense did a good job and the offense did just enough."

Worse than the defeat for Washington was the injury to Smith, who suffered two broken bones in his lower right leg midway through the third quarter.

The severity of the injury was clear immediately, and Redskins coach Jay Gruden said Smith would need season-ending surgery "right away."

"I know it was very painful for him and heartbreaking for a lot of people," Gruden said.

"He's a great guy and hard worker and one of the key leaders on this football team. These things happen in pro football, unfortunately. Just hate to see them happen with a guy like Alex."

The 6-4 Redskins now face a Thanksgiving showdown for the NFC East division lead against the Dallas Cowboys on Thursday.

The Cowboys breathed life into their playoff chase with a 22-19 victory over the Atlanta Falcons.

The Cowboys squandered a 10-point, fourth-quarter lead, but grabbed the win when Brett Maher booted a 42-yard field goal with no time remaining and Dallas improved to 5-5 on the season.

On a day when close finishes abounded, the New Orleans Saints pummeled the Philadelphia Eagles 48-7 -- inflicting the heaviest defeat ever meted out to a defending Super Bowl champion.

Saints quarterback Drew Brees completed 22 of 30 passes for 363 yards, four touchdowns and no interceptions as the Saints won their ninth straight game and improved to 9-1.

The Pittsburgh Steelers, meanwhile, failed to score in the first half and trailed by 10 late in the fourth quarter before a rally capped by quarterback Ben Roethlisberger's one-yard touchdown plunge with just seconds remaining that lifted Pittsburgh to a 20-16 victory over the Jaguars in Jacksonville.

"Horrible games that you find a way to win? Pretty special," Roethlisberger said.

Elsewhere, the Los Angeles Chargers saw their six-game winning streak halted when Brandon McManus booted a 34-yard field goal as time expired to give the Denver Broncos a 23-22 victory.

The Detroit Lions snapped a three-game skid with a 20-19 victory over the Carolina Panthers, whose decision to go for a two-point conversion and a win rather than an extra point to force overtime backfired.

The Chicago Bears strengthened their position atop the NFC North with a 25-20 win over division rivals Minnesota.