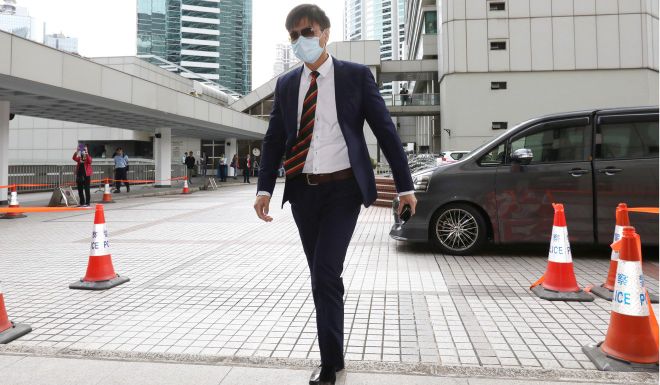 Enjoy the best prices with services from YIJINTECH Aircon!
Enjoy up to 5% rebate with BOC credit cards

A leading counsel for one of seven Hong Kong policemen jailed over an assault on a pro-democracy activist during the 2014 Occupy protests has slammed what he called a disgraceful attack on the trial judge.

Tim Owen QC began his client Chief Inspector Wong Cho-shing’s appeal against his conviction and sentence on Monday by condemning what he described as an ill-informed, outrageous and baseless attack on judge David Dufton following the verdict last year.

“There was no question that the judge’s conduct was impeccable,” the lawyer said. “The fact that the conviction was unsafe in no way calls into question his integrity.”

Owen’s 51-year-old client was one of seven officers found guilty of assaulting former Civic Party member Ken Tsang Kin-chiu, 42, who had been arrested for pouring liquid over their colleagues during a clearance operation in Admiralty on October 14, 2014. Protesters had occupied the area as part of a civil disobedience movement calling for greater democracy in the city.

News footage of Tsang curling up against the officers’ kicks, punches and baton strikes quickly circulated in 2014, making it one of the most controversial scenes from the largely peaceful protests, while the site gained infamy as the “dark corner”.

Subsequent medical examination found the social worker had suffered swelling and reddish bruises on his face, neck, shoulder, flank, chest and back.

All seven were sentenced to two years’ jail on one count of assault occasioning actual bodily harm.

Chan alone was sentenced to one more month on one count of common assault for twice slapping Tsang at a police station, to be served concurrently with the longer jail term.

Dufton’s ruling received a mixed response on social media, with some police supporters posting insulting comments and calling him names such as “dog judge” and “yellow-ribbon judge” – a reference to the colour that had come to represent the Occupy movement.

The seven officers have since lodged appeals and have been released on bail.

On Monday, Owen said the attacks on Dufton’s competence were “ill-informed and disgraceful”.

But he argued that the conviction was unsafe because the TVB footage, which the prosecution said captured the alleged attack, had been edited and not properly authenticated and thus could not be used as a control sample for authenticating the other footage used in the case.

“There is a lengthy break in continuity [of the footage], which is crucial if you’re basing the case on identification,” Owen said.

He also complained that the use of clothing in identification was inherently unreliable, so it would be perverse to conclude beyond a reasonable doubt that the footage showed the same group of individuals.

The appeal is being heard before Court of Appeal vice-president Andrew Macrae and justices Ian McWalters and Poon Shiu-chor.

The prosecution, led by Director of Public Prosecutions David Leung Cheuk-yin SC and Jonathan Caplan QC, will respond on Wednesday.

Tsang was jailed for five weeks in a separate trial at Kowloon City Court in 2016 over one count of assaulting police and two of resisting police.

He dropped his appeal and served time last year, after his assailants were jailed.