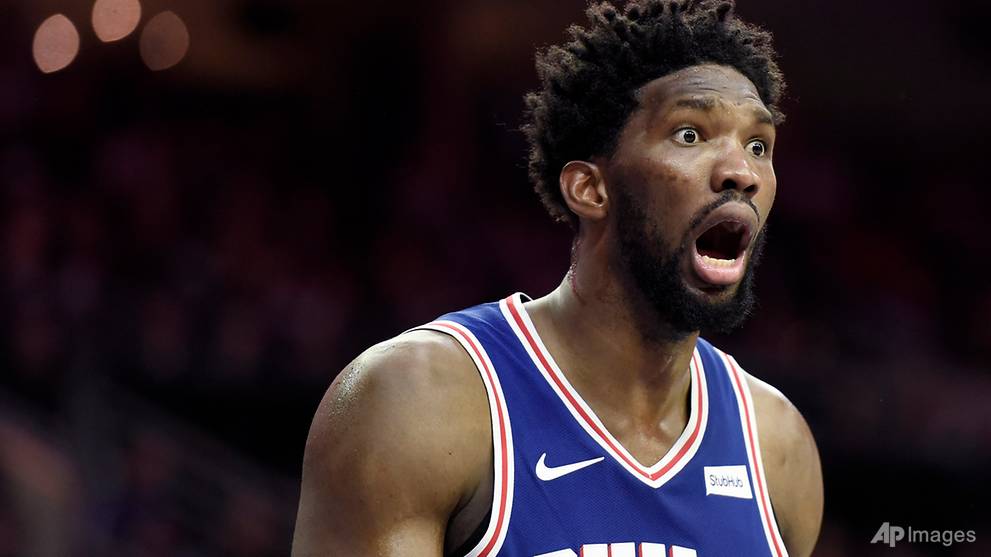 Philadelphia 76ers' Joel Embiid (21) reacts to a referee call in the second half of an NBA basketball game against the Phoenix Suns on Nov 19, 2018, in Philadelphia. (Photo: AP/Michael Perez)

WASHINGTON: Joel Embiid scored 33 points and grabbed 17 rebounds to power Philadelphia over the Phoenix Suns 119-114 on Monday (Nov 19), keeping the 76ers the NBA's only unbeaten team at home.

The 24-year-old Cameroonian 7-footer made 12-of-23 shots from the floor and added three steals as the Sixers improved to 9-0 at home and 12-7 overall despite trailing 62-57 at half-time.

"It was good," Embiid said. "We can't be taking possessions off. Tonight we did. We had a lull but we picked it up. I was just trying to do my job."

Australian playmaker Ben Simmons added 19 points, 11 rebounds and nine assists for the 76ers while Jimmy Butler added 16 in his fourth game since coming from Minnesota to the 76ers, who won for third time in four days.

"It's great," Embiid said of Butler's arrival. "He helps us a lot, especially on the defensive end. We've got to have him. We've got to keep working and he's going to take us a long way."

"He's going to be a really good big man in this league," Embiid said of Ayton, whom he had taunted on social media before the season.

Westbrook sprained his left ankle two weeks ago but only missed Saturday's game for the birth of twin daughters Skye and Jordyn.

The loss kept Oklahoma City from joining Portland, Memphis and the Los Angeles Clippers atop the Western Conference at 11-5. Oklahoma City had won 10 of 11 prior games, including five of six without Westbrook.

Walker, who struck for 60 points on Saturday in a loss to Philadelphia, became only the sixth player in NBA history to follow a 60-point effort with 40-or-more points - putting his name alongside Michael Jordan, Kobe Bryant, Pete Maravich, Wilt Chamberlain and Tracy McGrady.

"I've just been working on my game to make sure I'm staying as ready as possible for these kind of moments," Walker said. "I've just been making some shots."

Greek star Giannis Antetokounmpo had team highs of 29 points, 12 rebounds and six assists to power Milwaukee over visiting Denver 104-98 as the Bucks improved to 12-4 overall and 8-1 at home.

Mike Conley scored 28 points, hitting 7-of-11 3-point shots to lead the Memphis Grizzlies to their fourth consecutive victory, a 98-88 triumph over Dallas that made them 7-1 at home.

"We got some good stops, did a good job offensively," Conley said. "Fourth quarter, we found a way. Every punch we gave them they gave us two back. We stuck with it and we got the win."

The Clippers stretched their win streak to five games by ripping host Atlanta 127-119. Montrezl Harrell came off the bench to score 25 points and grab 11 rebounds while Tobias Harris scored 24 points and added eight rebounds to lead the Clippers.

Detroit's Andre Drummond scored 23 points and grabbed 16 rebounds while Blake Griffin and Reggie Bullock each added 21 points in a 113-102 triumph over visiting Cleveland.