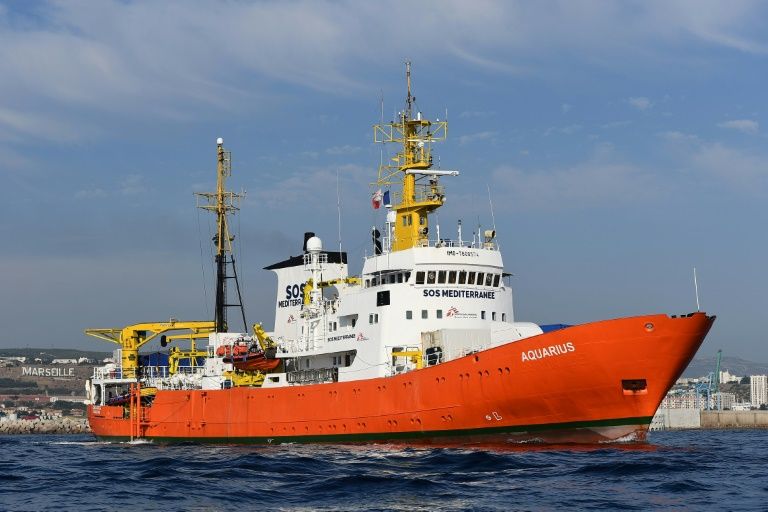 Italy has ordered the seizure of the migrant rescue ship Aquarius for allegedly dumping potentially toxic waste, Doctors without Borders (MSF) said Tuesday, in a fresh blow for aid groups working in the Mediterranean.

Investigators suspect the vessel, chartered by MSF and the SOS Mediterranee charity and currently stuck in the French port of Marseille, passed off 24 tonnes of dangerous and potentially toxic refuse as ordinary garbage in 11 Italian ports, Italian media reported.

Prosecutors in the Sicilian city of Catania are running the inquiry into migrant clothing, food leftovers and sanitary waste that was handled at Italian ports from the Aquarius and the Vos Prudence, another vessel chartered by MSF last year.

Some rescued migrants are found suffering from HIV, meningitis and tuberculosis but MSF said its port operations "including waste management, have always followed standard procedures.

"The relevant authorities have not contested these procedures or identified a public health risk since we started our activities at sea," it said.

MSF and SOS Mediterranee have chartered the vessel since 2016.

"This is another strike in the series of attacks criminalising humanitarian aid at sea," said Frederic Penard, SOS Mediterranee's operations head.

"The tragic current situation is leading to an absence of humanitarian search and rescue vessels operating in the central Mediterranean, while the mortality rate is on the rise."

French authorities have not commented so far. According to SOS Mediterranee, the crew has not received any official notice yet.

MSF bank accounts in Italy have been blocked by the authorities, the international charity said. Twenty-four people are under investigation, Italian news agency ANSA quoted sources as saying.

Rescue ships have saved thousands of migrants stranded in the Mediterranean.

"The only crime we see today on the Mediterranean is the total dismantling of the search and rescue system," said MSF Italy director Gabriele Eminente.

He added in the statement that MSF had suffered "two years of defamatory campaigns" against non-governmental organisations.

Aquarius has been in Marseille since Manama revoked the right to fly its flag following a request from Italy's far-right, anti-establishment government, meaning the Aquarius cannot legally set sail.

Immigration remains a hot-button issue in the European Union following the 2015 migration crisis. There are deep divisions among member states over how to handle the continent's biggest influx since World War II.

"I was right to stop the NGOs' ships (landing in Italian ports)," Salvini tweeted.

The International Organization for Migration says that about 15,000 migrants have drowned in the central Mediterranean since 2013.

During the same period Italy has seen 600,000 migrants land on its coastline, while other European nations have closed their borders.